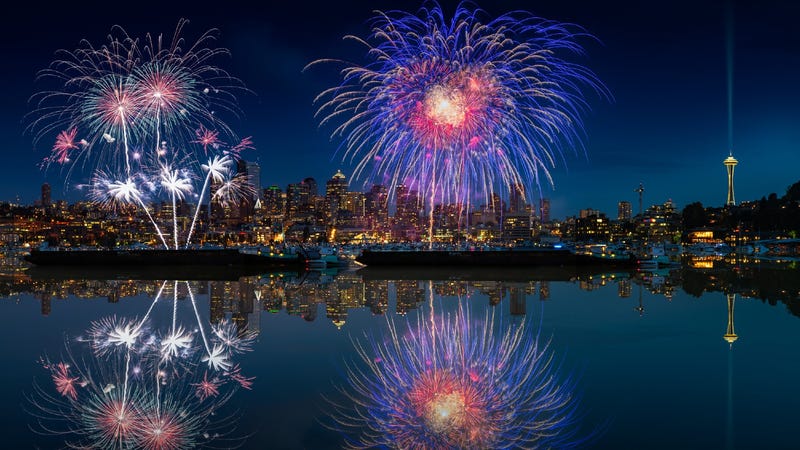 We've had a long couple of years without the kind of Fourth of July fireworks we're used to around here, but the dry spell is over -- there are pyrotechnics all over the place this year!

If you're reading this on July 4, you probably still have time to catch fireworks in lots of spots around the Sound, even though some communities are shooting their stuff up earlier in the weekend. More on that in a minute.

Of course, the OG pyro extravaganza is the Seafair Summer Fourth on Lake Union. This will undoubtedly be by far the biggest display around the Sound, and as the Seafair folks say, you have a choice of different vantage points:

Lake Union for an overhead view, Gas Works Park for a hilltop view, and Lake Union Park for a darker sky view. Each location offers its own unique experience.

The festivities start Monday afternoon and things keep building until the explosive climax at around 10:30pm when it's dark enough to fire those bad boys off from the barges on Lake Union.

But downtown Seattle isn't the only place to see fireworks this year. Communities all around the Sound are doing their part to blow stuff up, and there's a great rundown here, courtesy of the Seattle Times: Where to see fireworks and other Fourth of July 2022 events in the Puget Sound area. As this article explains, lots of communities beyond Seattle are going with fireworks on the actual Fourth -- Bellevue, Bainbridge Island, Burien, Carnation, Everett, Federal Way, Issasquah, Renton, Snoqualmie, and Tacoma are some of the places you can make it an actual July 4 spectacular. But plenty of other communities are getting in on the action earlier in the weekend, before the actual Fourth.

And fireworks are just the tip of the iceberg, Check out What to Do in and around Seattle for Fourth of July courtesy of Seattle Met. You'll find all kinds of fun for the family, including a stirring flag presentation at the Museum of Flight in Seattle, a naturalization ceremony for brand new American citizens at Seattle Center, and a Red, White and Bollywood party with exotic beats in Seattle's quirky Fremont neighborhood.

And one quick side note: If you've got a dog in the household who isn't quite as big a fan of stuff exploding as we humans are, check out this recipe for whipping up a DIY calming spray, made of essential oils, that might might help relieve Sparky's stress around the rockets' red glare and the bombs bursting in air.

Have fun and stay safe out there!