That’s a wrap on Audacy Beach Festival! Day one was fire, day two was beyond lit and we seriously can’t wait to do it again next year! But for now we’ll do out best to break down all the amazing performances throughout Beach Fest’s second day, but to be honest… next year, if you can, you really should just be there.

Oh and while you're reading, and until next time, a way to make it feel like you're back there on the sand — check out the Audacy Beach Festival Exclusive Station featuring artists from this year's lineup and more. 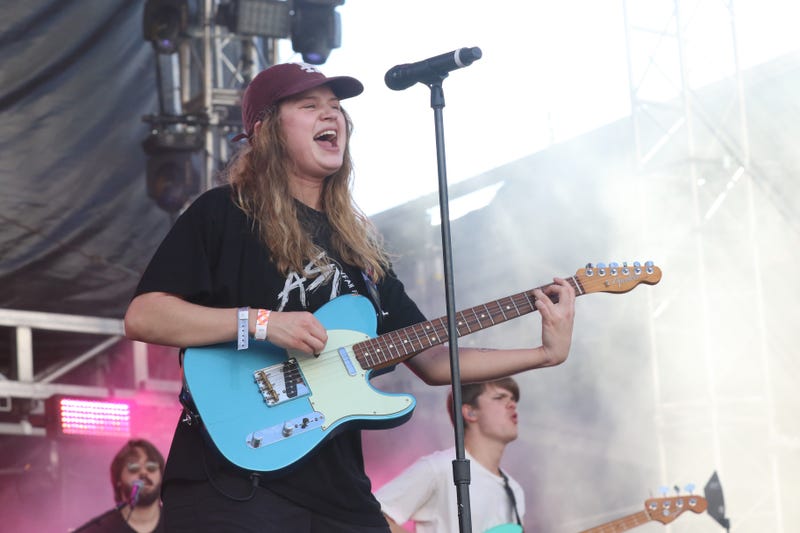 The BEACH stage crowd was packed, vibin’ and ready to go for girl in red, who started off her lively and energetic set with “Serotonin.” Making full use of the stage, running from left to right, hopping around, and head banging to “You stupid b****” next. And while we were enamored by her, the artist from Norway was captivated (and a little) distracted by the weather… and ocean… and palm trees… and boats — which she pointed out during a talk break.

Acknowledging that “talking about the weather isn’t a good sign, at least not in a normal conversation,” in this case it would have to be and the crowd didn’t seem to have any problems with it. After the weather talk, it was time for “Body and Mind,” which if you ask her she “thinks f***ing slaps,” and ummm yeah that checks.

After alerting the crowd she had one song left, which obviously led them to boo in sadness, and her to hilariously respond “it’s a festival that’s how it is — you shmack em in you shmack em out,” she re-tuned her guitar and gave it her all for a stellar performance of "i wanna be your girlfriend.” 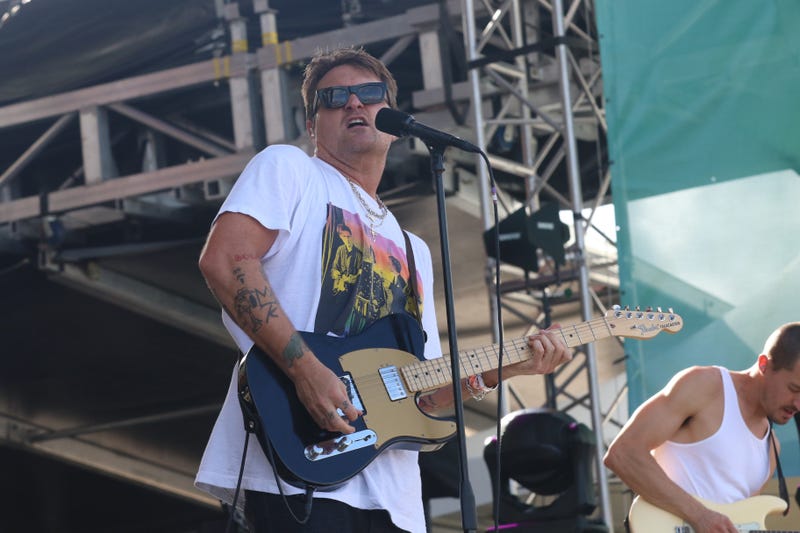 Reaching out to the crowd, throughout their set, Cold War Kids let us know, “we’ve played a bunch a shows, but haven’t played a big outdoor festival yet in a couple of years now and that’s insane." And well, we feel safe saying this on behalf of everyone present for their set, it was our pleasure to have Audacy Beach Festival be the Cold War Kids’ personal welcome back party to the land of music festivals. From making us believe that “Love is Mystical,” and our sweaty selves jumping around so much we needed someone to “Hang Me Up to Dry,” our “First” thought was we never wanted it to end (see what we did there). 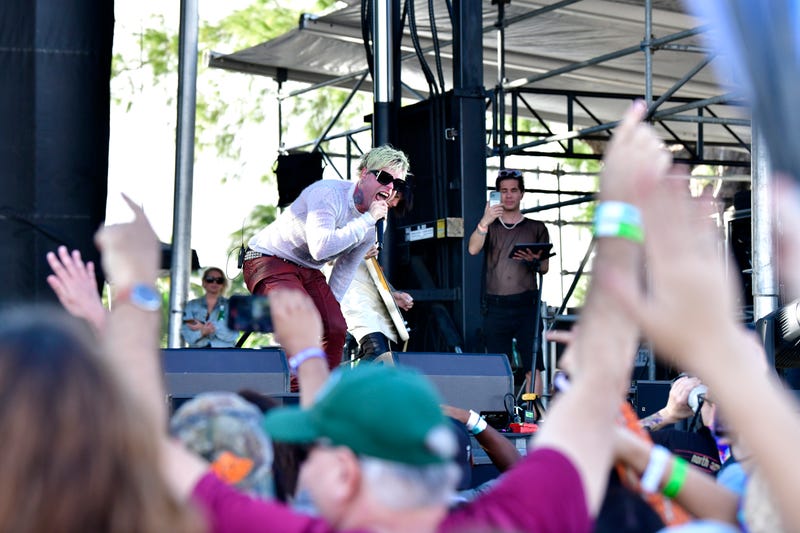 Aside from his absolute FIRE set, that we’re gonna credit for producing a genuine rainbow in the sky, this rockstar with a heart of gold took over Audacy @beachfestival Instagram stories. Which you should totally go check out after this. But anyway, let’s talk about the music, because WOW, starting things off with “Karma,” MOD SUN asked the crowd, “are you ready for the greatest show in you entire f***ing life?!” — the answer was a resounding and sand-shaking YES, and he delivered.

Throughout the set Mod was having the time of his life on stage singing some of his tracks including “Annoying” and “Stay Away,” and because of that so did everyone else. For his “last show of 2021” Mod made everyone in the crowd feel special — and we’re not just saying that — trust us, we know. Oh and he even started a mini (controlled) mosh pit, we’d get into details, but for that you really did just have to be there. 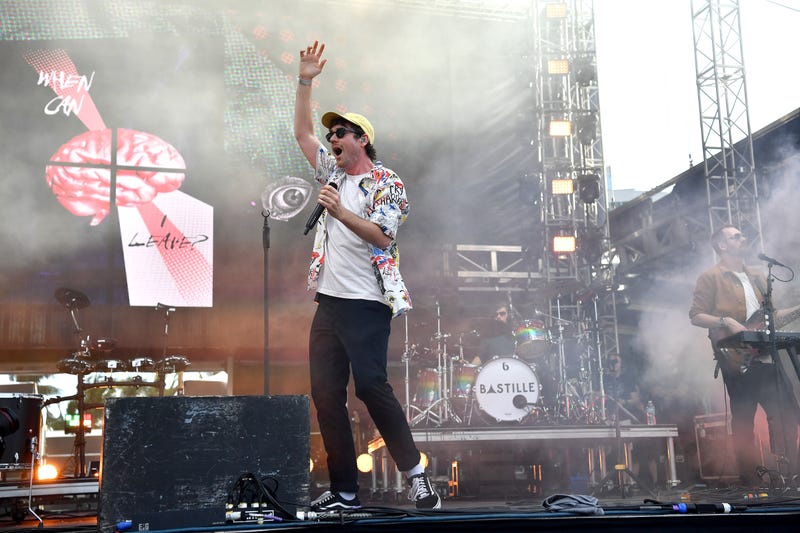 Okay so Bastille is a total vibe, we already know this. But Bastille performing on a beach… well they do sing that they want us to be “Happier” after all don’t they? And they did just that. There “to play you a bunch of songs that are very depressing, but sound very happy” including “Distorted Light Beams,” “Pompeii,” and a few other made up the perfect set. Also performing their next single “No Bad Days,” Bastille’s hope was “to come to a beautiful beach festival with loads of happy people and play a genuinely and incredibly depressing song,” which also happens to have an addicting beat so it works out. 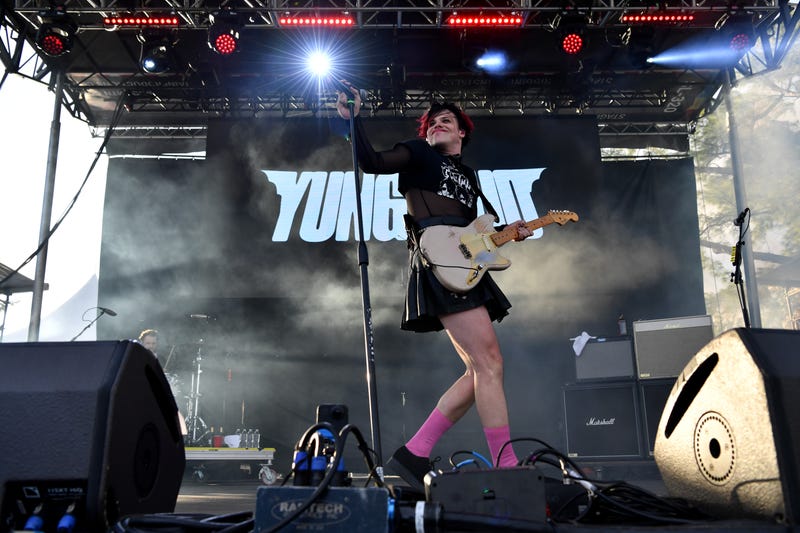 Before he even stepped out on stage, YUNGBLUD had at least one audience member hyperventilating, so there’s that. And once he did ferociously arrive, rocking red lipstick and quite possibly the sickest fit ever (pink socks, leather pleated skirt, sheer long sleeves top under a Cramps crop top) we couldn’t take our eyes off him.

Honestly, if it wasn’t for the electric screams coming from the crowd we would have forgotten they were even there. His set was filled with crazy theatrics, sexy spastic dance moves and most important of all, incredible music including, “love song” and “Parents,” and ended with a titillating drum set-crashing, speaker-shoving, guitar-tossing, beer-spilling tantrum, that not gonna lie, made us fall even more in love with him. YUNGBLUD seriously smashed it. 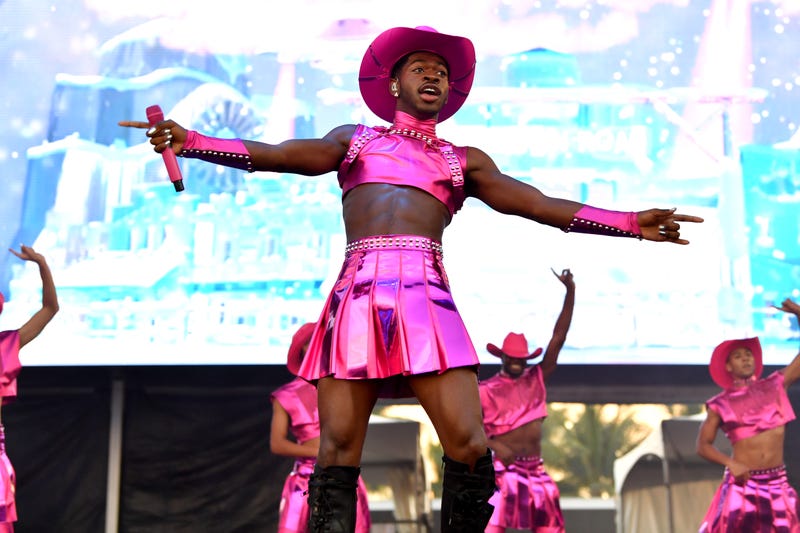 Slaying in a metallic hot pink harness and pleated skirt backed by a pack of similarly dressed back-up dancers, Lil Nas X arrived to serve Audacy Beach Festival a little dose of booty-bopping music and IT. WAS. EVERYTHING. Blessing us with hits like “INDUSTRY BABY,” “Old Town Road,” “THATS WHAT I WANT,” “HOLIDAY,”, and a “Baby Boy” (yeah the Beyoncé/Sean Paul banger) intro into "MONTERO (Call Me by Your Name.” Nas came to entertain, and that he did, even making a slight wardrobe malfunction and a backwards fall, (which he endearingly urged “nobody better post that”) look smooth. 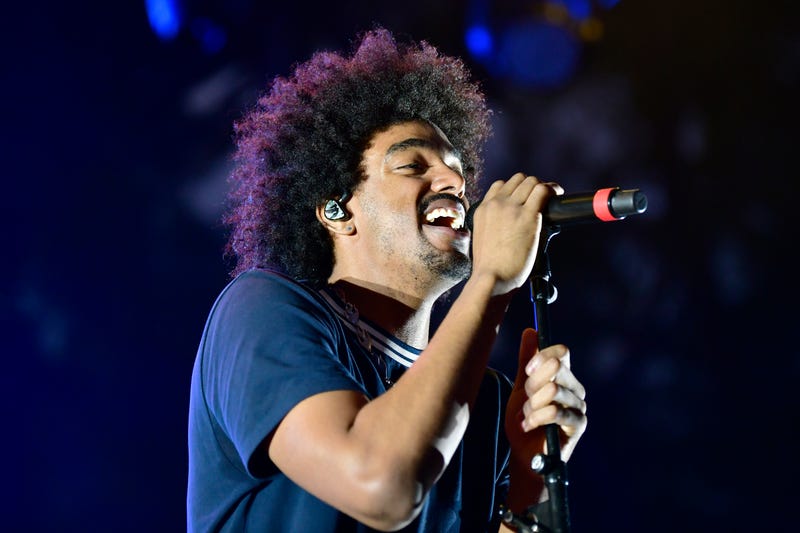 As the sun was setting Tai Verdes took to the RIPTIDE stage, the air smelled of trees (and no not the palm kind). Starting things off with “Let’s Go To Hell,” Tai set the mood giving major cool high school basement party vibes. Which obviously makes him the coolest of all the kids in this scenario, and further proved it by jumping off stage to party with the crowd during “FEELING THIS BAD NEVER FELT SO GREAT.” Obviously “stuck in the middle” made its way on to the set list, after which Tai asked if it’d be okay to slow things down “to get a little wild and a little freaky” with “we would have some cute kids.” The answer by the way, ’twas definitely “A.O.K” (sorry had to). 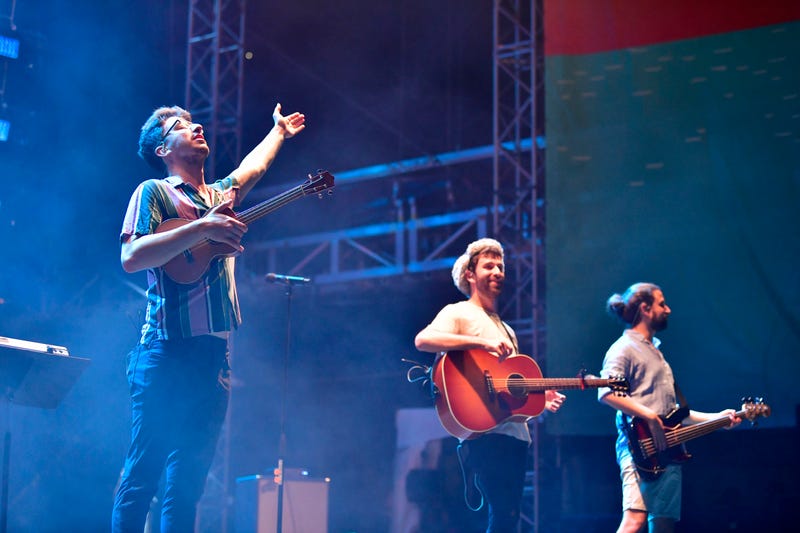 Let’s play some word association — high energy, funky dance moves, groovy. Now go! You said AJR right? Same. Straight up, these three brothers really know how to put on a show. Starting things off with “Bummerland,” the vibe was anything but. About halfway through there set, they took time to chat with the crowd, pointing out who they connected with and giving hilarious reasons why. Lead vocalist Adam Met’s choice was for being “the best he’s ever seen at knowing absolutely none of the lyrics.” And his brother Ryan’s choice, a particular someone that had been solely starring at and pointing to him only, the entire time. Thinking that when his part in “Sober Up” came up they’d have this “special connection” for the “my favorite color is you” part, but when he looked to make eye contact she was looking at her phone….

Continuing the party, AJR brought Daisy the Great (who performed earlier in the day) onstage for “Record Player.” And if you thought they’d go out with a “Bang!,” you’d be wrong. Cause after performing their mega hit, and before bringing the house down with “Burn the House Down,” they walked us through the production process of the track, and then finished off their set with “Weak.” The whole thing was lit from start to finish and made us wish you could rewind a live concert. 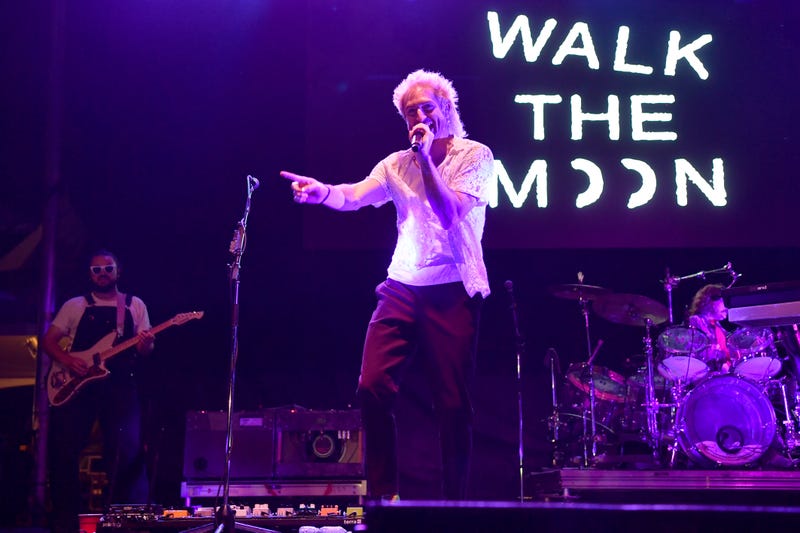 The sun might have been down, but the energy was up as WALK THE MOON performed their hits including “One Foot,” “Avalanche,” “Shut Up and Dance,” and more to a technicolor light show of yellows, pinks, and blues. In between tracks, lead singer Nicholas Petricca let the crowd know just how amazing it felt to be there saying, ”it feels so good to be at a festival, out in the real world with real people. This is f***ing awesome.” And yeah, we’d have to agree, because WALK THE MOON’s performance was the very definition of awesome. 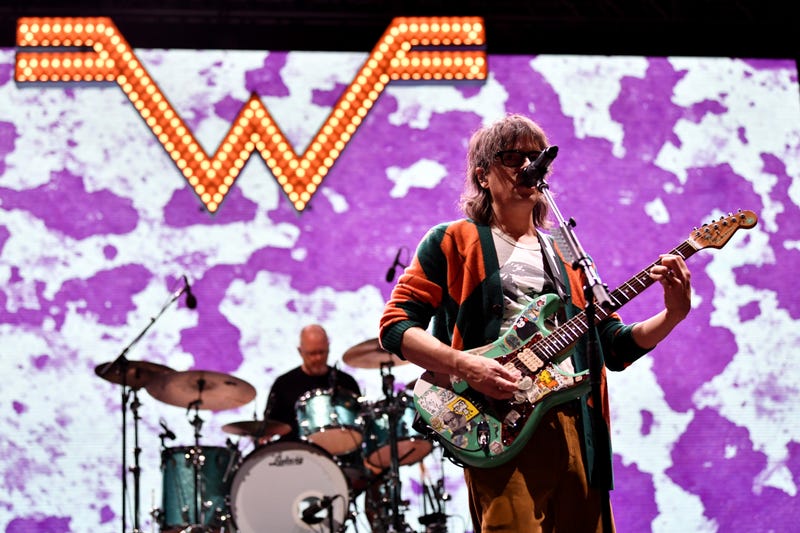 Giving us modern day bandstand vibes, Weezer took the Audacy Beach Festival stage to properly close out the day, and that they did. From “Hero” to “Hashpipe” then “Beverly Hills,” and those were just the first three songs.

Singing along to every lyric, if the crowd wasn’t clapping along or waving their hands from side to side, then they were excitedly up on in the air. And even with their impressive catalog, the band made some time for epic and much appreciated covers that included Metallica’s “Enter Sandman” and Toto’s “Africa.”

Speaking of their impressive catalog, Weezer said let’s give the people what they want by literally performing “All My Favorite Songs,” as well as “Undone (The Sweater Song),” “Island in the Sun,” and “Say It Ain’t So.”

After teasing the crowd they were heading out, which felt like an absolute tragedy to all involved, Weezer reemerged for an encore performance of “Buddy Holly,” before joining together for a final and this time real bow and wave goodbye.

And just like that another year of amazing performances was behind us. Be sure to check out all our interviews and more from Audacy Beach Festival here.