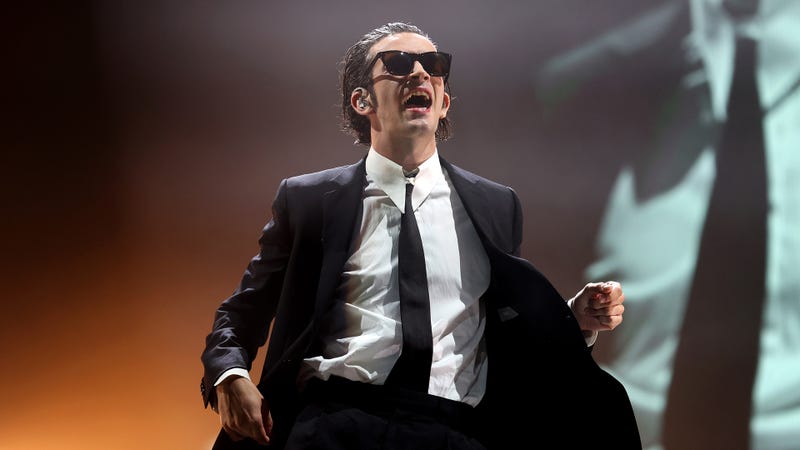 The 1975's Matty Healy joins Audacy host Marty Lennartz from Chicago's 93XRT to discuss the band's forthcoming release, Being Funny in a Foreign Language, scheduled to hit shelves and streaming services in mid-October, and a 23-date North American tour following soon after.

Following up The 1975's prior album teases "I'm In Love With You," "Happiness," and "Part Of The Band," the group offered up one more last week to get fans ready for the full release of their fifth studio album on October 14. Check out their Samuel Bradley-directed video for "All I Need To Hear" below.

It's an exciting time for Matty as the days creep closer and closer to the official drop of Being Funny in a Foreign Language after spending the past few years away from fans. "It's kind of still on schedule for us," Matty says. "I've realized we've done a record every two years for the past decade," although he admits, "it's the first time that it's felt like we've been away, because we haven't been touring constantly; we've actually been not doing that. It's always exciting putting out a record, because we're always just making records for fun, so when they come out it's always a bit like, 'who knows?!'"

The 1975, with all of its original members (Matty Healy, Adam Hann, Ross MacDonald, and George Daniel), has managed a feat of longevity that not many others can boast, now going on 20 years as a band. "I came from a generation where binding together and making something bigger than yourself -- individualism, especially social media's version of individualism wasn't so incentivized -- so we kind of bound together at a young age and that's what we've always done. But it's like when they asked Mick Jagger what it's like to be famous... he's like, 'well I've never not been famous, so I don't know.' The 1975 predates my adulthood, I was 13 when I started The 1975. I literally couldn't understand a world without The 1975 at the center of it. Which isn't my ego at the center of it, but it is a bit of a mad thing, yeah."

Although they live in London now, that bond, it's worth noting, extends beyond just the core band members, which has kept a truly familial vibe between the Cheshire natives. "Everybody, whether it's Darren who does our lights or the other musicians in the band," Matty adds, "we're all friends from high school. People used to ask me if I missed those guys... and I'm like, 'no they're literally with me.'"

"That's our crew, we're very much like a unit," he says. "If you get together at 18 when you have all of these cultural ideas: leather jackets, favorite bands, girlfriends, egos... you're already a thing. Whereas if you start at 13, you discover those things together, so it creates this sort of shared cultural consciousness between the four of us."

Listen to the full interview with The 1975's Matty Healy and WXRT in Chicago's Marty Lennartz above, and stay tuned for more conversations with your favorite artists right here on Audacy.

Also, beginning in November, The 1975 will head out on their 23-date At Their Very Best Tour, making stops in New York, Los Angeles, Nashville, Houston, Atlanta, D.C., and more. Tickets are on sale now.