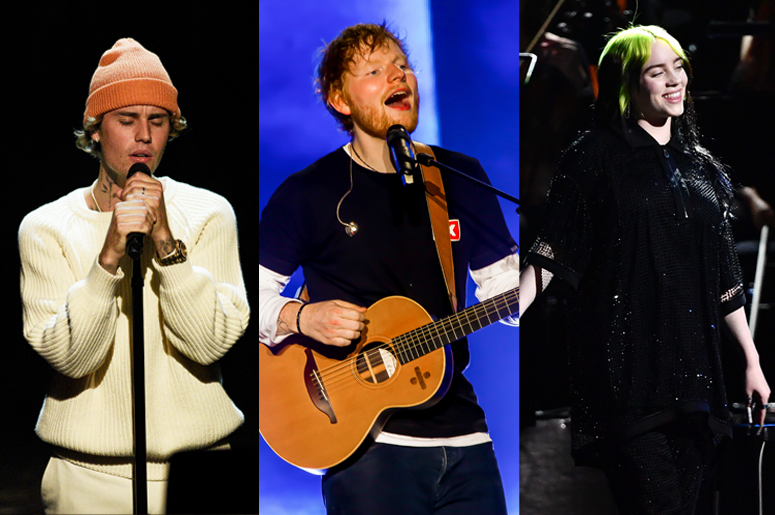 As of, Tuesday February 23, the following are the 10 most subscribed to artists on YouTube. From Billie Eilish to Ed Sheeran to Justin Bieber, we’re breaking down what makes them all worthy of claiming the top ten spots, besides the obvious, duh.

If anything, Billie Eilish is one of a kind, and naturally so is her music as well as music videos. Our personal favorite is hands down “bury a friend,” but by popular demand with nearly 1.08 billion views “lovely,” Billie’s track featuring Khalid with it’s hauntingly beautiful lyrics and melodies, accompanied by its simplistically somber and thought provoking visual, takes the crown. Narrowly beating out another one of our faves and her most notable hit “bad guy” by 19 million or so views.

Rising to fame in 2008 for kissing a girl and liking it, at one point or another Katy Perry was everyones favorite California gurl or “Teenage Dream.” By 2013, Katy was on to her fourth studio album Prism, subsequently releasing music videos for its chart-topping songs "Dark Horse” and “Roar,” leading Perry to become the first artist to have multiple videos reach one billion views on Vevo. The latter of which, with a count of 3.2 billion still holds the top spot as KP’s most viewed music video since it’s Tarzan swinging ferocious debut.

After arriving on the scene at the sweet age of 16, Taylor cemented herself as Country music’s sweetheart. However years and numerous hits later TayTay began treading the Country music line with her album Red, completely severing ties with the genre completely with her 2014 album 1989. While T Swift has numerous note worthy visuals, it is from that album that secured Taylor her most viewed music video. “Shake It Off,” with its 3 billion views, was Taylor’s first foray into pop music, however the songs no BS message is one she’d delivered once or twice before, and at least once or twice since.

Debuting as a band in 2013, it wasn’t until 2017 that the K-pop sensation known as BTS crossed over into the global market of music. Where they have perched themselves a spot on the top of the charts and in the top 10 list of most subscribed to artists on YouTube. No doubt, just a fraction of their ARMY comprises their over 45 million subscribers, helping them earn millions of views with each video they release. As for their most popular music video for “(방탄소년단) DNA,” the views for that reached the billions, 1.2 billion to be exact. And with all that dope editing and envious dance moves, we totally get it.

You know his life story from his lyrics and the movie inspired by his rise to fame. And while as of late he’s been getting some not so stellar recognition, Eminem is universally musically loved. We know he’s since apologized, but maybe Em should think twice before lyrically disparaging someone’s name, as he did to Rihanna. Since, one of their collabs “Love The Way You Lie,” is responsible for his most viewed video with 2.1 billion views.

If we had to come up with a comparison, we’d say Ed Sheeran visuals are the Nicholas Sparks movies equivalent for music videos. As most of his songs detail the obstacles and joyous moments of romance and life in general. His music videos do the same, and people love it. Disagree? The nearly 5.2 billion views for “Shape of You,” should do a good enough job of convincing you otherwise.

Since starting off her career on Broadway and rising to fame on Nickelodeon shows, Ariana Grande has made herself a household name. And whether or not your pronouncing her name correctly, it doesn’t stop you from listening, watching and loving every undeniable hit she puts out. As it seems, the most viewed out of her, in one way or another light to hot pink shaded music videos, “Side to Side," her collab with Nicki Minaj reigns supreme with 1.8 billion views. From Ariana’s synchronized cycle dance moves to Nicki’s, well Nicki-ness, what’s not to love?

The helmeted DJ does it all, from fun on Fortnite to bangers with Bastille, and YouTube can't get enough of him. Marshmello's steady stream of content has made him one of the biggest names everywhere, but especially on the video-viewing platform. With that said, as he is a DJ, it’s all about the music and therefore all about the music videos. No doubt you’ve heard “Alone,” but if you have yet to peep the music video, no worries, with 1.9 billion views, we’d say the 4 year old track is boding well.

Just in the last year alone BLACKPINK has broken a handful of YouTube records. So it should come to no ones surprise that they are just a few million shy of making it to the top of this list. While the K-pop girl group has started serving up bilingual bops, including our personal favorite “How You Like That,” which has earned itself 780 million views. Their most viewed video with 1.5 billion is “‘뚜두뚜두 (DDU-DU DDU-DU),” sung entirely in Korean.

By now we all know the Biebs, but before he was the Justin Bieber we all know and love, he started by uploading covers to YouTube and well, the rest is history. Discovered at age 13, it wasn’t until he was 15 that he debut “Baby,” his very first single. He's continued to deliver hits accompanied by videos ever since. Funnily enough his most viewed music video doesn’t even feature him, but as we probably contributed to one million out of the 3.4 billion views “Sorry” has amassed, we totally get it.