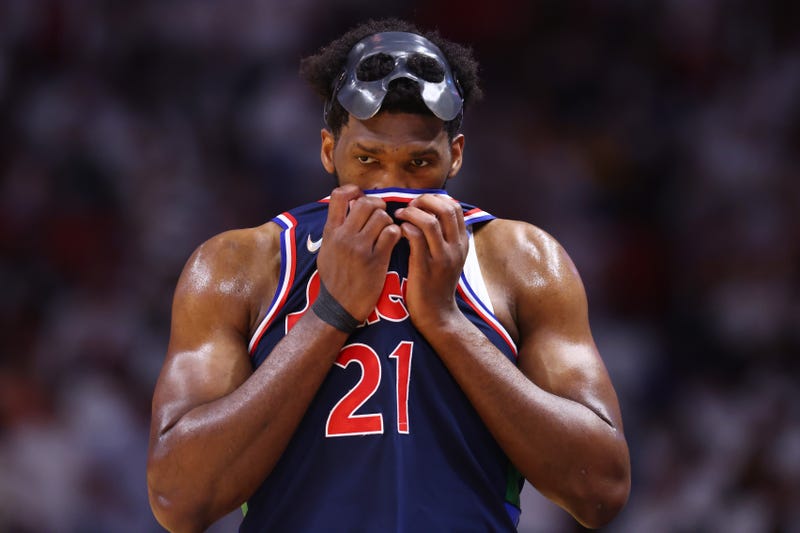 Philadelphia 76ers superstar Joel Embiid wasn't able to develop any rhythm in the team's blowout loss to the Miami Heat in Game 5 of the East semifinals on Tuesday night. Midway through the second quarter, he aggravated a fractured orbital bone that cost him two games in the series. And, to add insult to injury, the 28-year-old scored only 17 points and finished with a plus-minus of minus-29 -- the worst mark of his postseason career.

At halftime, NBA on TNT analyst Charles Barkley sounded off on Embiid's poor first-half performance, arguing that he looked distracted after coming up short in this season's MVP voting. Following the game, Embiid denied that narrative, telling reporters that he expected to finish as a runner-up for the award weeks ago. Whether or not Embiid was annoyed by the MVP voting, he played below his superstar standards in Game 5. And teams that lose that pivotal game and fall into a 3-2 series deficit have advanced only 18-percent of the time.

"If he was fully healthy and if he wasn't getting over concussions -- he was off for however many days -- there's so many other things that could be going on there," SI.com reporter Howard Beck told Maggie and Perloff on Wednesday. "I hope it's not because he was so troubled by the MVP, because I don't think it'd speak well of anyone as a competitor -- to lose focus over something that, relatively speaking, is trivial. And especially when you've got bigger fish to fry, a championship to pursue, that's more important than an MVP award."

In 68 regular season games, Embiid averaged a league-high 30.6 points with 11.7 boards and 4.2 assists, and of those games, the 7-foot center scored 30-plus points in 40 of them. Through nine playoff games this spring, Embiid has averaged a team-best 24.0 points with 10.6 rebounds, 2.1 assists, and a 17.29 player efficiency rating. According to ESPN insider Adrian Wojnarowski, MVP honors will soon be given to Denver Nuggets star Nikola Jokic.

Philadelphia, which clinched the East's fourth seed with a 51-31 overall record, will play a do-or-die Game 6 against Miami on Thursday night (7:00 ET tip-off) at Wells Fargo Center. According to FiveThirtyEight, the Sixers currently have a 24-percent chance to reach the East Finals and only a 7-percent chance to make the NBA Finals for the first time since 2001. They last won a title in 1983.

The entire NBA playoffs conversation between Beck and Maggie and Perloff can be accessed in the audio player above.