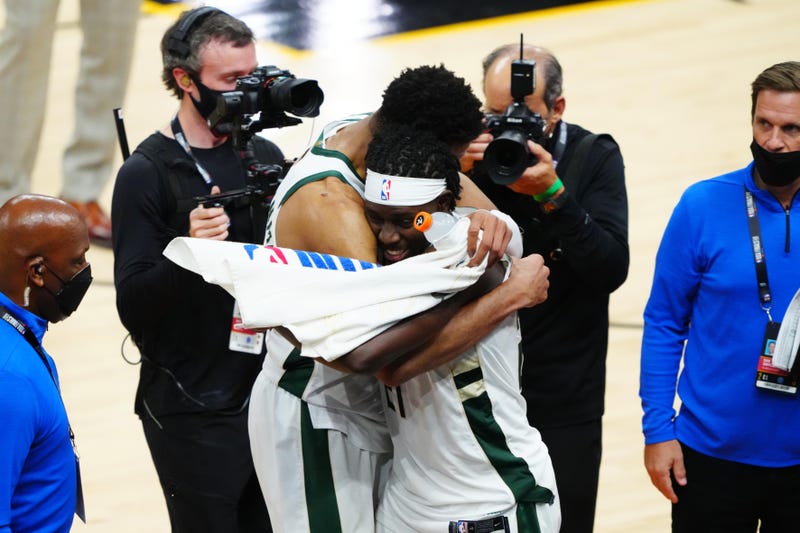 The New Orleans Pelicans connections in the NBA Finals were clear no matter which bench you looked at.

On the Phoenix Suns' side it was former New Orleans coach Monty Williams, former star point guard Chris Paul and the Pelicans' presumptive next head coach in Willie Green.

On the Bucks' side it was simpler: Jrue Holiday, a combo-guard that struck an emotional chord with the fanbase over seven seasons before being traded before the 2020-21 season. His side was the one that earned the NBA title, and for himself a hefty payday.

The victory triggered a $1 million bonus in Holiday's contract, according to a report from ESPN's Bobby Marks. That deal, signed prior to the season, was for 4-years and $134.9 million.

Jrue Holiday has earned a $1M bonus with Milwaukee winning the NBA Championship.

The Bucks are now a luxury tax team as a result of the bonus (something ownership is happy to pay).

That bonus bumps Milwaukee into the luxury tax, according to Marks, an extra bill the title-winners likely won't have much issue with.

After Milwaukee took down the Suns 4-2 in Game 6 to win the franchise's first title in 50 years, Holiday was asked on the court how he was able to fit in with his new team so quickly.

A true winner on and off the court 👏🏾 pic.twitter.com/ZBMhfyAeY9

"They embraced me. ... They told me what the deal was from the beginning," Holiday said. "I've seen all the work that they put in, how close they've gotten, and they believed in me, honestly."

Holiday, long credited as one of the NBA's top defenders at the guard position, averaged 17.7 points and 6.1 rebounds throughout the season. Those numbers were down slightly from Holiday's time with the Pelicans as he meshed with star scorers Giannis Antetokounmpo and Khris Middleton. But his playmaking went on display throughout the playoff run, with his assists tally climbing to 8.5 per game. Holiday's top performance came in the Bucks' Game 6 victory with 27 points, 13 assists and the game-clinching steal in the final minute.

"Coming here was obviously the greatest thing of my career," Holiday said.

But it was Holiday's former team, the Pelicans, that summed it up best: "a champion on and off the court -- congrats."

A champion on and off the court - congrats @Jrue_Holiday11 🏆

Jrue Holiday was +159 this playoffs.

The highest +/- by any player. pic.twitter.com/a65fYJtwS6

Jrue Holiday saw 14,000,605 different scenario and this was the only ending where Giannis won a ring pic.twitter.com/rD8C5zP6Ub

Jrue Holiday got that championship pic.twitter.com/scI9YZgjTa

Jrue Holiday is putting on a defensive masterclass 🔒