Perhaps Antonio Brown is not quite ready to call it quits in the NFL.

The controversial wide receiver seems to have taken notice of the recent injuries to the Dallas Cowboys receiving corps and had a message to deliver when he was approached by TMZ Sports over the weekend.

“Tell Jerry Jones to call me,” he said.

It is hard to tell whether or not Brown is being serious. He continued to flirt with the idea, adding, “maybe. If [Jones] wants to dance. If he wants the production.”

It is not as if the Cowboys cannot use help at the position, either. The team just lost James Washington for an estimated six to 10 weeks due to a fractured foot and will already be without Michael Gallup for the start of the season as he continues to recover from ACL surgery.

While Jones has never shied away from controversial players in the past, Brown may have too much baggage, even for the Cowboys owner.

The 34-year-old also said back in May he would not play in 2022 following a season that ended abruptly when he removed his uniform and pads in the middle of a game against the Jets and ran off the field shirtless, tossing his jersey into the MetLife Stadium crowd.

Brown accused Bucs head coach Bruce Arians of trying to force him to play through an injury, which Arians has denied.

Yet, Brown also seems to miss his former team, or at least his former quarterback.

Brown also teased a rap album he has been working on that is set to release in September, and added his new friend Kanye West may be featured on a song, so it seems like he has kept plenty busy away from football. 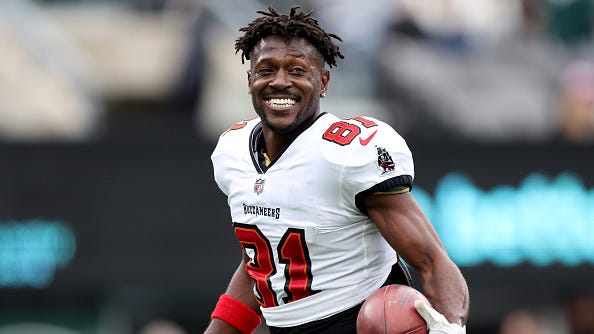