He also won’t blame them for not coming out.

The Commanders delivered an uninspiring performance Sunday against the Philadelphia Eagles, losing 24-8 in Landover. Among the talking points from the game was the vibe around the stadium, with Philly head coach Nick Sirianni even pointing out that it sure seemed like an Eagles home game.

During his weekly appearance on “The Sports Junkies”, Commanders defensive end Jonathan Allen responded candidly when asked if that bothers him.

“I would like to say yes, but at the end of the day we’ve got to put a better product out there," Allen said. "We can’t get on the fans for not showing up when we’re not giving them a reason to show up. So, that’s not really something I’ve thought about recently because we’ve got to play better football if we want them to come out. It just is what it is."

The Commanders sit at 1-2, and their loss to the Eagles on Sunday showed that they are a ways away from being able to really keep up with the best in their division.

Washington will play the Cowboys in Dallas in Week 4 before returning home to host the Tennessee Titans, a team whose fanbase shouldn't travel nearly as well as the Eagles', in Week 5. 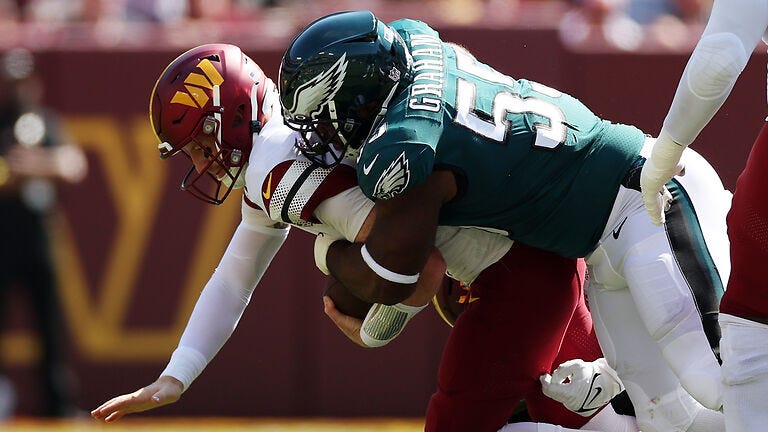 Brandon Graham: Eagles were prepared for Carson Wentz to hold onto the ball too long