The Philadelphia Eagle’s trade for A.J. Brown has put Jalen Reagor’s future in question and it seems as if there was a team willing to make a deal for the receiver during the draft but it never transpired.

According to NFL Network’s Adam Caplan, the Baltimore Ravens showed interest in Reagor with the Eagles discussing a potential deal for safety Chuck Clark before the talks eventually died down.

The Ravens, who traded No. 1 receiver Marquise “Hollywood” Brown to the Arizona Cardinals, certainly need some more depth at wide receiver while the Eagles could use some help in the secondary so the trade definitely made sense for both sides.

Clark, 27, finished last season with two interceptions, 12 passes defended and a sack but is reportedly unhappy with how things have gone this offseason, with the Ravens adding two new safeties in veteran Marcus Williams and first-round pick Kyle Hamilton.

Reagor, meanwhile, now sits behind Brown and DeVonta Smith on the Eagles depth chart after two disappointing seasons since being selected in the first round of the 2020 NFL Draft.

It remains to be seen whether or not both Clark and Reagor will be dealt before the season, but it does not appear as if either one is in the long-term plans for their respective teams. 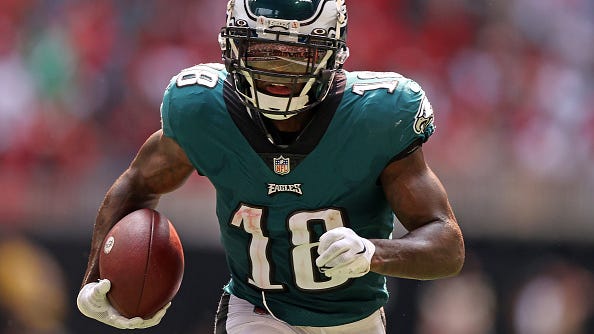