At the outset of the 2022 Major League Baseball season, Audacy Sports ranked the current uniform sets of each team from 1-30. Today, we're getting even more micro, looking at the best individual alternate uniforms worn currently.

Before we jump into the countdown, here are a few notes:

- "City Connect" uniforms were not eligible for this list. While we will rank those separately at some point, maybe only one or two of them would have drawn serious consideration for this list.

- Every alternate uniform was considered, and that means that some teams have multiple entries on this list because they have more than one excellent secondary uniform. Other teams -- like the New York Yankees and Detroit Tigers -- don't have any alternate uniforms.

Without further ado, here's our list of the 20 best alternate uniforms used across the sport currently: 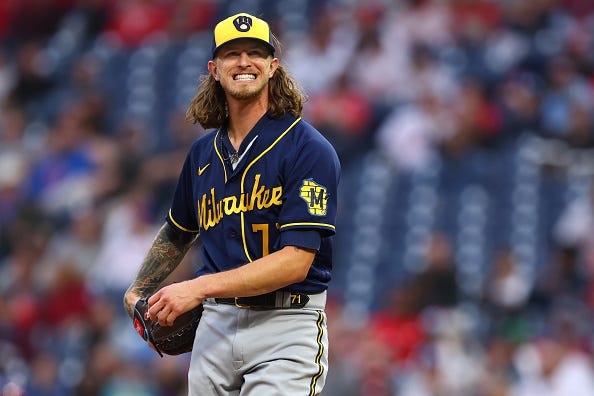 Even if we wish that the Brewers would go back royal blue as their primary color, the team's new uniform set introduced in 2020 was massive upgrade over what they had worn at any point since the mid-1990s. The ball-in-glove hat logo is one of the top five logos in MLB history. We even like the yellow and navy blue hat on these road alternates. The only question we have about these uniforms has to do with the patch on the left sleeve. The outline of Wisconsin with the "M" in it is cool, but wouldn't it make more sense for it to have a "W" or no letter inside it? 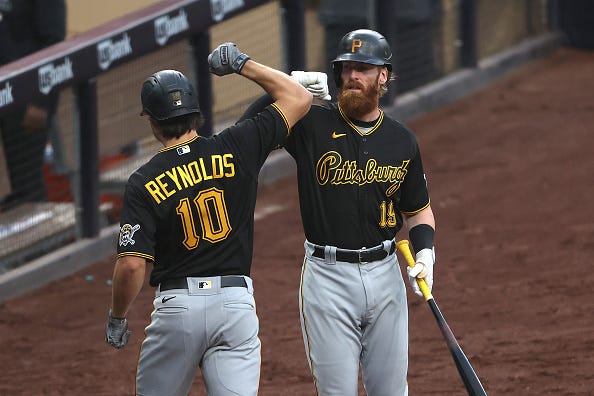 These aren't everyone's cup of tea, but we're big fans of the road alternate uniforms with "Pittsburgh" written across the front in black cursive lettering, which were hatched in 2020 with a nod to the team's history. The cursive script is the best look that the Pirates have, certainly better than any uniform that just features a "P" on the left chest of the uniforms instead of the "Pirates" or "Pittsburgh" being written out. 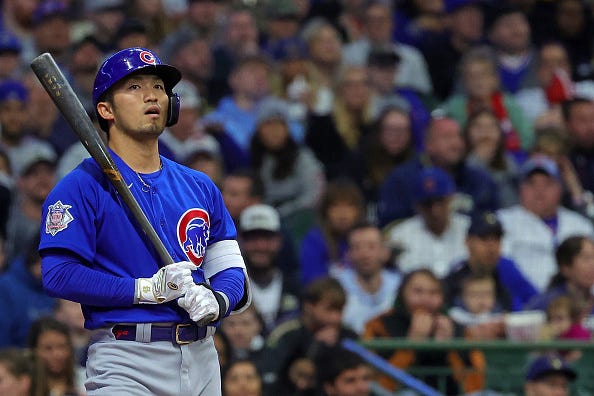 There's a lot of bad solid-colored alternate uniforms that historic franchises wear currently, but the blue alternate tops that the Cubs have are their best look, in our opinion. The current blue uniforms were introduced in the late 1990s and feature a Bear on all four paws inside the "C" on the left chest, with the National League's logo on the right sleeve. 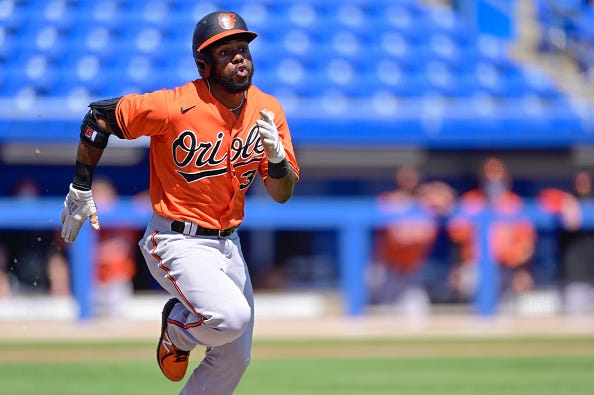 When the Orioles brought back the cartoon bird on their caps in 2012, they also dusted off orange alternate uniforms with "Orioles" written across the front of the jerseys. The Orioles have a rich uniform history, and are one of maybe two teams who can pull off this bold of an orange uniform. 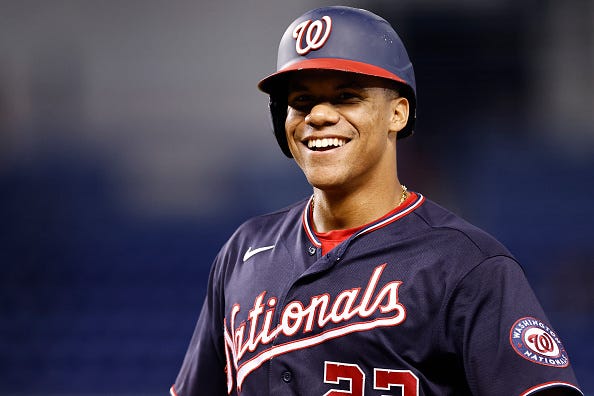 The white home versions of this same uniform should be limited to only being worn in Spring Training, but the road alternates that the Nationals introduced in 2018 are tremendous. While we're not typically fond of navy blue, it works in this case, especially with a cursive script on the uniform top and a hat that features a red brim. Bonus points for getting a matte helmet that actually matches the shade of blue on the uniforms. 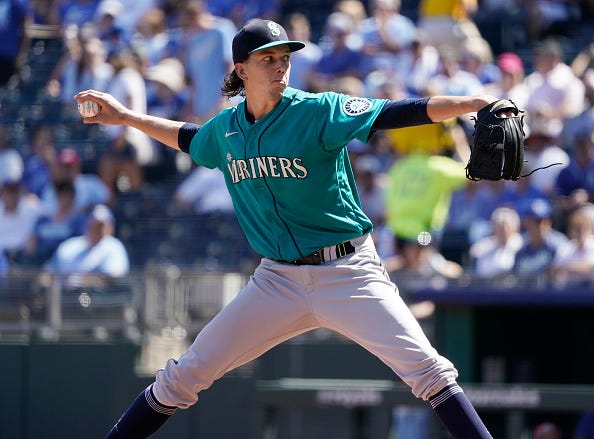 Referred to as "Northwest Green" by the locals, the Mariners initially introduced these teal colored alternate uniform tops in 1994 and wore them for three seasons. These uniforms returned as home alternate in 2011, and are a unique, yet sharp look. It was smart to ditch the primary teal hat with navy blue brim from the 1990s and only use the primary navy blue hat with teal brim. 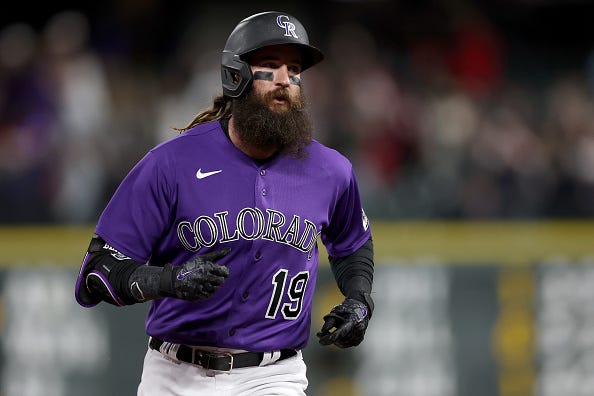 Uni Watch's Paul Lukas is the Michael Jordan of writing about sports aesthetics, but we're going to disagree with him on the use of purple as an alternate jersey color for the Rockies. Colorado isn't a franchise that's been around for most of the sport's history -- their first season of play came in 1993. Therefore, it's fine for them to deviate from the norm a bit, they are still a relatively new team. Purple is different, and in the case of the alternate tops that the Rockies wear at home, they are awesome. 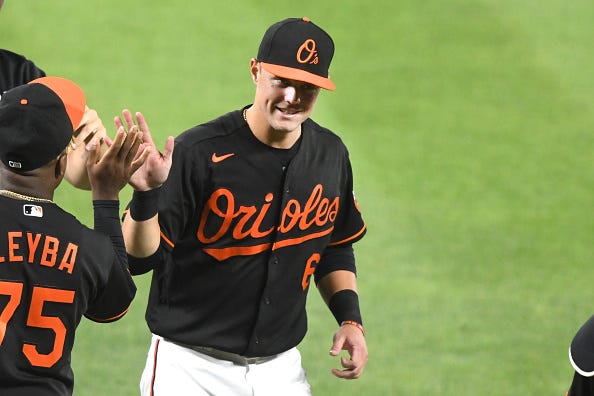 Before we get to an alternate that Manny Machado currently wears, here's one that he sported for the first six-and-a-half seasons of his career. We're big fans of the black-and-orange color scheme of the Orioles, and the "O's" cap. Our only complaint with this uniform set is that the Orioles don't have "O's" batting helmets that they wear with it. 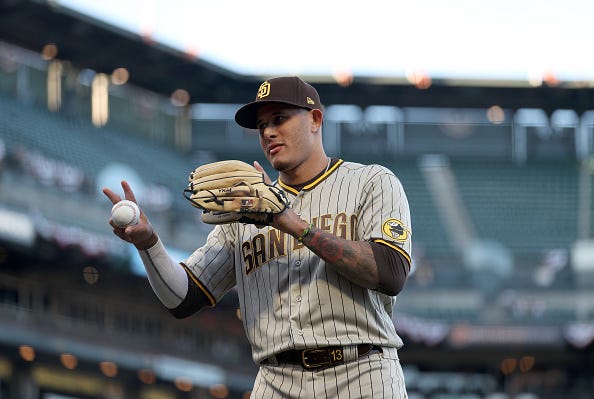 Not only are pinstripes great on a home uniform, but they look pretty nifty on the road as well. Don't call these uniforms gray -- they are sand brown -- but they are part of an excellent uniform set introduced before the 2020 campaign. The Friar swinging on the left sleeve is our favorite part of these road alternates. 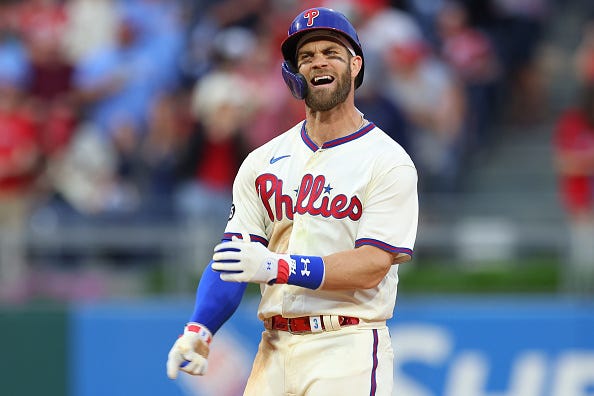 These aren't the most popular cream alternates on this list, nor are they the most beloved alternate uniforms that the Phillies currently have. Nonetheless, these alternate uniforms -- which were introduced in the 2008 season -- do a great job of paying homage to the team's home look in the late 1940s. The Phillies wear the cream alternates for all day games played at Citizens Bank Park, except on Thursdays. They would be wise to begin utilizing the matching gray versions as a road alternate, as opposed to their read tops. 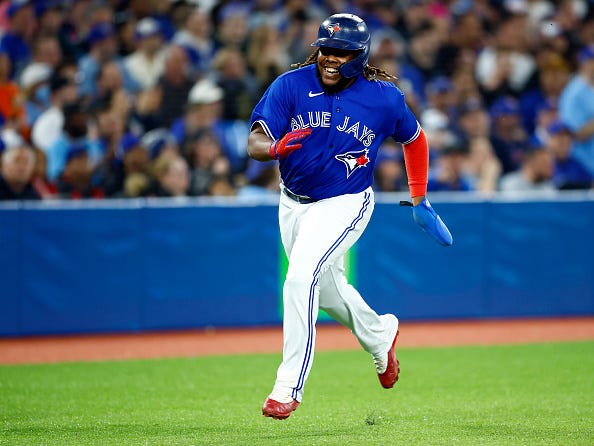 They aren't called the "White Jays" or the "Gray Jays," so even if it's only as an alternate, the Blue Jays need a uniform top that's actually blue. The only critique that we have of the blue alternates is that the shade of blue used on them isn't an exact match for what's utilized on the team's matte batting helmets. 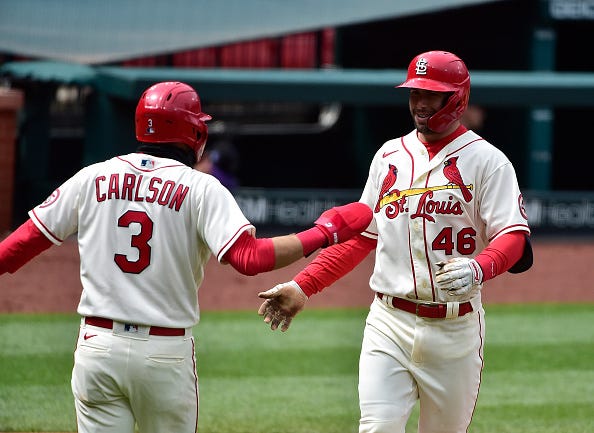 Initially introduced as an alternate uniform to be worn for Saturday home games during the 2012 season, the Cardinals' cream secondary uniforms are tremendous. The two Cardinals perched on top of the baseball bat with the "S" in "St Louis" wrapped around it create pretty much a perfect jersey front. 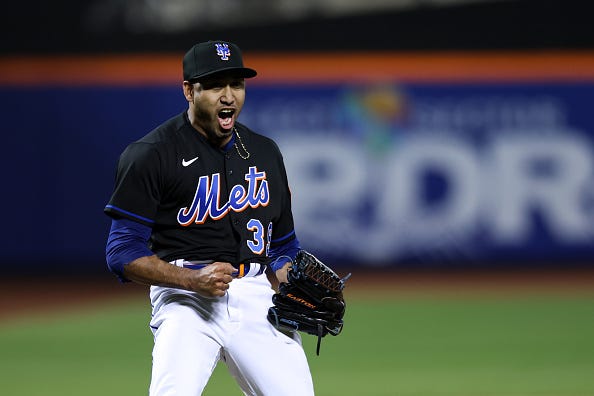 OK, so this will be controversial. But while some people can't stand the black Mets alternate tops, we think the black alternate jerseys and caps with blue script -- along with orange and white trim -- are excellent. Initially worn between 1998 and 2012, the Mets brought back the black tops during the 2021 season, making them their Friday night look at Citi Field. 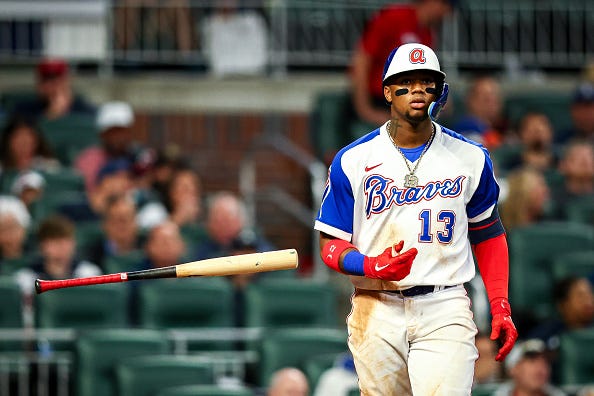 The Braves have navy blue, red and cream alternate uniforms, but their best secondary look comes on the occasions that they break out the throwback home jerseys that they sported from 1972 to 1975. These, of course, were the uniforms that the Braves were wearing when Henry Aaron broke Babe Ruth's home run record in April of 1974. We would also love the Braves to mix in the gray road variant of this look that they wore from 1976-1979, most recently seen during the 2019 season. 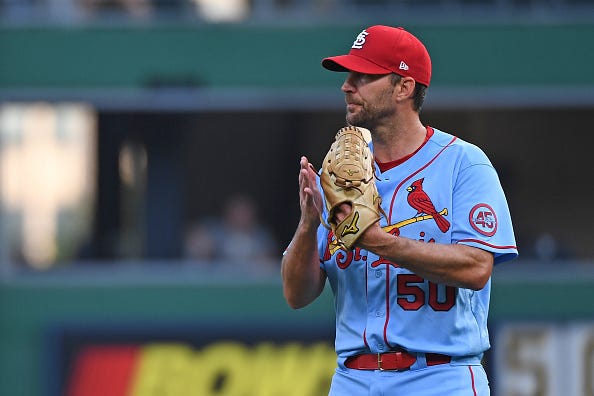 These may not be the best powder blue throwbacks currently utilized in baseball, but they are still pretty great uniforms. From 1976-1984, the Cardinals' primary road uniforms were powder blue. Props to the Cardinals for continuing to wear these popular uniforms only on the road, as they were initially intended. 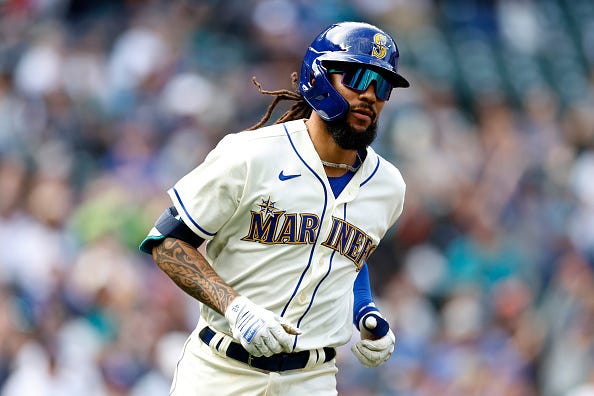 The Mariners have a deep arsenal of good looking uniforms, perhaps none better than their cream alternates. Ahead of the 2015 season, the Mariners introduced these uniforms, which pay homage to the past in terms of the cream, royal blue and gold colors with the team's current uniform script and hat logo. The Mariners wear these alternate uniforms for Sunday games played at T-Mobile Park. 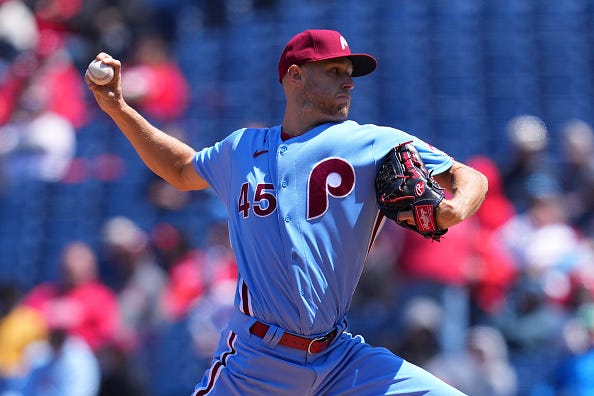 The Phillies initially wore powder blue uniforms as their primary road look from 1972-1989. In 2018, they began wearing the powder blues as their Thursday alternate uniform for games played at Citizens Bank Park as part of their "Throwback Thursday" promotion. Powder blue on powder blue was a bit much as a primary uniform, but as an alternate it's excellent. The only thing we would like to see changed is for the "P" on the uniform to have a matching line inside it like the one of their maroon hats has. 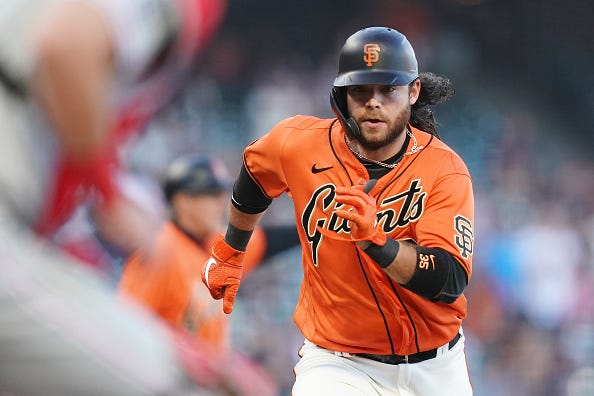 The black alternate tops that the Giants wear are a great looking color, but the "SF" logo on the left side of the chest makes it look a little too much like something from the Cactus League, perhaps because they also double as their Spring Training tops. On the flip side, the script on the orange alternates that the Giants wear for Friday evening games at Oracle Park is *chef's kiss*. The shade of orange is bold, but it's not too loud and mixes very well with the black and white already in the team's uniforms. 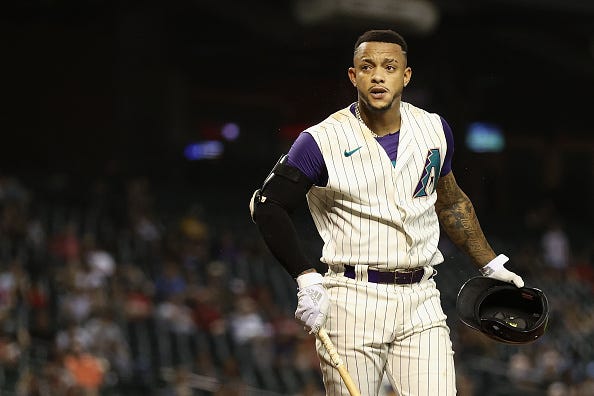 The Diamondbacks have an inconsistent schedule for when they wear their purple and teal throwback uniforms, but they are among the best looking threads in the modern history of the sport. To simplify things, they Diamondbacks should just give the people what they want -- go back to wearing purple and teal full time, as they did from 1998-2006. 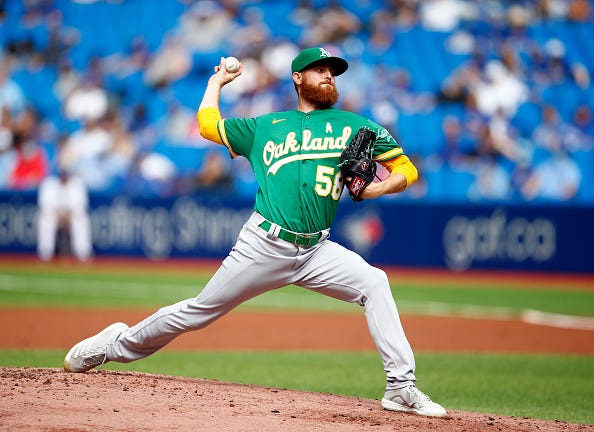 The A's have one of the best uniform sets in baseball currently, and at the forefront of that are their kelly green alternate tops and hat. While we prefer the kelly green worn as a home alternate, the script does say "Oakland," so they actually make even more sense on the road. If the A's have a long-term future somewhere other than Oakland, they shouldn't even consider changing names or uniforms. 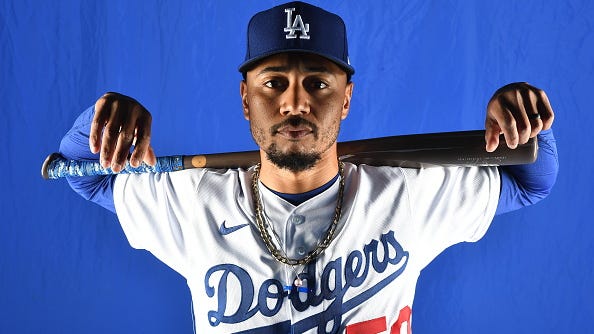