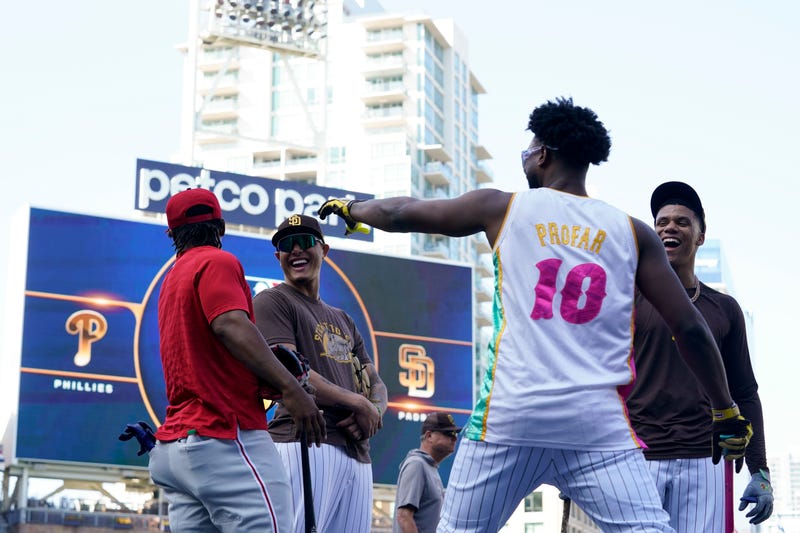 SAN DIEGO (AP) — Either Bryce Harper or Manny Machado will be playing in the World Series this year.

Harper’s Philadelphia Phillies will face Machado’s San Diego Padres in an all-wild card NL Championship Series starting Tuesday night at Petco Park. It’s not exactly the matchup most fans would have predicted, but neither slugger is about to apologize about their teams making thrilling October runs as the two lowest seeds.

“I think, honestly, we’ve got the two best teams going up against each other, and it’s going to be a fun week for sure,” said Machado, who had an MVP-caliber season as he carried the Padres in the absence of star shortstop Fernando Tatis Jr.

The 89-win Padres, who have benefited from veteran manager Bob Melvin’s calm style during his first year as their skipper, went to New York and beat the 101-win Mets in the wild-card round. Then they eliminated the Los Angeles Dodgers, baseball’s best team with a franchise-record 111 wins, by winning three straight games after losing the opener on the road.

The 87-win Phillies are the No. 6 seed. They downed the NL Central champion St. Louis Cardinals in the wild-card round and then beat the defending World Series champion Atlanta Braves, who took the NL East title with 101 wins, in the division series.

That sent the Phillies and their hot bats to San Diego, which was back to being sunny and 72 degrees for Monday’s workout after a rare October rainstorm drenched the ballpark during the electric Game 4 clincher against the Dodgers on Saturday night.

“People kind of counted us both out, right?” said Harper, who missed two months after breaking his left thumb when he was hit by a pitch by San Diego’s Blake Snell at Petco Park on June 25. “I think it was L.A. or the Braves or the Mets are going to win because those three teams are so dynamic and they had such great regular seasons, as they always do."

“I think it is going to be a great series,” Harper added. “It’s going to be a lot of fun. I know we’re looking forward to it as a team and the opportunity to come in here and win a game hopefully and get home.”

Right-hander Zack Wheeler is expected to start for the Phillies in Game 1, and 36-year-old Yu Darvish takes the mound for the Padres. Darvish would have gone on three days’ rest if the Padres had been forced to play Game 5 of the NLDS at Dodger Stadium on Sunday night. But they finished the Dodgers with a five-run seventh inning in a 5-3 victory in Game 4.

Most of the focus will be on Harper and Machado. They were teammates on the 2009 under-18 U.S. national team that won the Pan-Am championship. Harper was the top overall pick in the 2010 amateur draft by Washington while Machado was the third pick by Baltimore.

They made their big league debuts three months apart in 2012, Harper as a 19-year-old and Machado shortly after turning 20. Seven years later they signed massive deals as the top free agents going into the 2019 season; Machado got a $300 million, 10-year contract with San Diego, and Harper went to Philadelphia for $330 million and 13 years.

“It’s going to be fun. He brings an energy. He’s one of the best players in the game.”

Harper said Machado “is a great talent. He’s one of the best defenders in the game. He can swing the bat very well. He’s having a great year this year. I’m excited to be able to share the field with him.”

The Padres are in the NLCS for the first time since 1998, right before they were swept by the New York Yankees in the World Series.

The Phillies are in the playoffs for the first time since 2011, when they capped a five-year run that included a World Series championship in 2008 and then losses in the World Series in 2009 and the NLCS in 2010.

Philadelphia, which outscored Atlanta 17-4 at home in the final two games of the NLDS, has had some memorable moments this postseason.

Harper has hit three playoff homers, including two while going 8 for 16 in four games against the Braves. Rhys Hoskins had an epic bat spike on a monster homer against the Braves, and J.T. Realmuto became the first catcher in postseason history to hit an inside-the-park home run.

Philadelphia’s Kyle Schwarber won the NL home run title with 46. Rob Thompson took over as manager on June 3 after Joe Girardi was fired and led the Phillies to the playoffs. He was rewarded with a two-year contract.

Harper, meanwhile, played for some San Diego travel ball teams years ago and knows a bit about the city.

“I expect this place to be pretty rowdy tomorrow night,” Harper said. “They’re a city that loves their baseball.”