We’re two weeks removed from Draymond Green’s punch to Jordan Poole. On the evening of Oct. 5, Anthony Slater of The Athletic broke the news of the altercation, two days before the video surfaced and went viral.

Slater joined 95.7 The Game’s “Damon & Ratto” Wednesday afternoon to discuss the Warriors after their 124-109 opening night win over the Lakers and how Draymond’s return has impacted the locker room.

“There’s iciness,” Slater told hosts Damon Bruce and Ray Ratto. “There’s no way around it. It’s pretty obvious and at this point, I’m not saying it can’t change and Draymond Green – I believe, assume that his play will change the situation – but at this point, he feels a little bit isolated in the locker room. I guess that was part of him coming back, that they were gonna isolate him for however long until they felt that situation changed, but certainly, two weeks in or however long it's been, it doesn’t feel like it’s thawed out very much.”

Green played 25 minutes Tuesday, scoring four points with five rebounds and five assists. Poole played scored 12 points in 28 minutes, showing some major sauce despite his 4-of-15 night from the field and 2-of-9 effort from 3-point land. In the second quarter, they executed a smooth pick-and-roll that featured a slick one-handed pass from Poole before Green’s finish.

Draymond also raised some eyebrows for calling LeBron James over to the Warriors bench for a mid-game chat during a free throw.

“You can just look at the aftermath of how this Jordan Poole punch has gone,” Slater said. “This is not a divided locker room, where half the locker room is mumbling, either behind the scenes or in front of the cameras, that they felt there was some justification for the situation, or, ‘This happens in locker rooms. Brothers are brothers.’ There’s not a lot of that. It’s mostly, ‘Draymond was very wrong. Jordan Poole was the one who’s been wronged. We’re on Jordan Poole’s side of this. Draymond Green must earn trust back.’ And Draymond Green kinda pushed back at the idea, at least at the word, ‘trust.’”

As Slater said, Green questioned the true meaning of the word “trust,” after veteran center Kevon Looney told reporters that Draymond, "got some work to do to get that trust back from us." In the days since, both players have said they want to promote better “camaraderie” amongst the team.

Bruce also noted how Steph and Klay were handed the microphone during the ring ceremony Tuesday night but Green didn’t speak to the crowd.

“He can find a microphone, let me tell ya,” Slater said. “He found a 25-minute documentary pregame on TNT, I believe. He’s done a couple press conferences, long ones. He will make his voice heard at any point that he wants to. In general, I have never felt as much as a kind of separation between Draymond and the Warriors than this moment.

“Then again, both sides are saying, ‘We wanna win a title,’ and we all know, if a title is won and a playoff run happens and Draymond Green is awesome, we’re probably gonna be talking plenty about that and probably wanting to interview him postgame after shuts (Nikola) Jokic in a big win in Denver or something like that. Circumstances can change, but they are a little odd right now.” 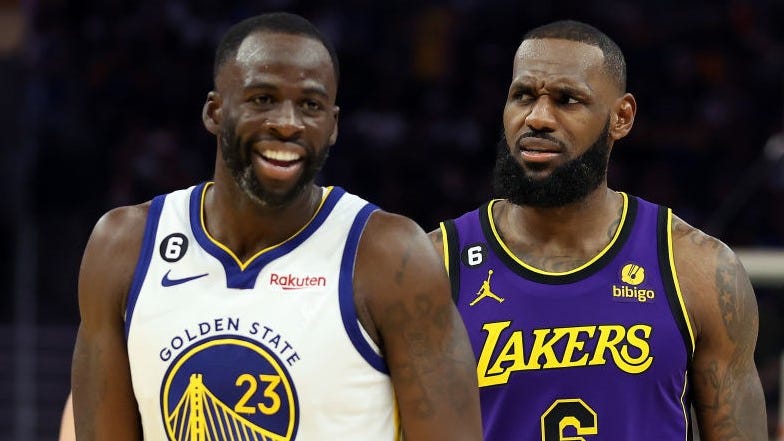