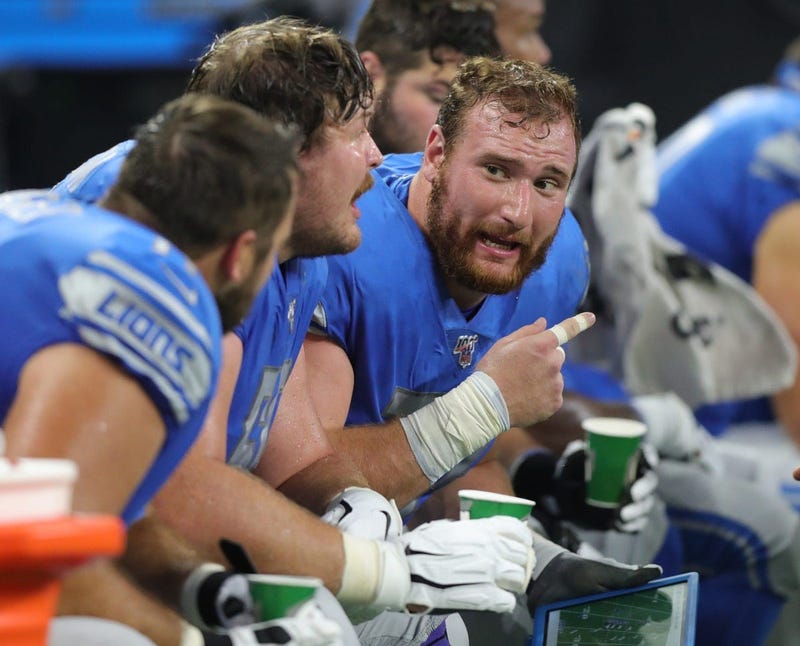 Frank Ragnow put a lot of good things on tape in the Lions' win over the Chargers on Sunday.

Consistently strong pass protection. A terrific downfield block on a screen pass to Kerryon Johnson that resulted in a touchdown. And ... one heck of a celebration once Johnson reached the end zone.

Ragnow, shortly after plowing over safety Rayshawn Jenkins to open Johnson's lane, rolled back to his feet, jumped off the turf, all 6'5 and 311 lbs. of him, and then punched the air like Judd Nelson as he walked off the football field at the end of The Breakfast Club.

"Oh, man," Ragnow said with a sheepish grin when his celebration was brought up on Monday. "That was just raw emotion right there. I don’t even know what that was. I’ve gotten a lot of crap for it from the guys, but it was raw emotion."

Check him out in the final seconds of this clip. You can bet Ragnow was a victim Monday morning when the Lions broke down the film.

No, it wasn't the most graceful leap by Ragnow, but the block that preceded it was pretty darn impressive. Part of the reason the Lions liked Ragnow so much in college was his penchant for getting downfield and finishing plays. They saw a mean streak beneath his friendly exterior.

As Ragnow famously said the night he was drafted, his favorite part of football is "trying to put another man on his back against his will." Only difference on Sunday is that Jenkins ended up on his stomach.

"Felt good," Ragnow said. "Those screens are one of those plays you get excited about, because you get out in space and try to show off your athleticism, and that play I was able to execute."

That play, and several more along the way. Two games into his switch back to center, the position where he excelled in college, Ragnow is looking right at home.

On Sunday he was the best pass blocker on an offensive line that posted a shutout in the sack category, keeping Matthew Stafford clean for just the second time in his past 17 games. Per Pro Football Focus, Ragnow allowed just one hurry on 33 pass-blocking snaps, earning the highest grade among centers this season.

"I think all five guys up front were really meshing well," Ragnow said. "Hats off to the tight ends, the RB’s and Stafford, really everybody. The ball was coming out quick, we were executing with the shifts and the nudges. It was clean there in protection. That’s a good step forward."

Especially after last week, when Stafford was sacked three times in Detroit's tie to Arizona. A clean quarterback and check in the win column left the offensive line in a much better mood Monday.

"Just a great feeling keeping Stafford safe," said Wagner. "That’s our main concern. We take a lot of pride in keeping him upright, and when we have game’s like that we’re definitely proud."

Just as important, the Lions' offense was able to execute down the stretch. First they went on an eight-play, 69-yard drive to take the lead midway through the fourth quarter. And when they got the ball back with about a minute left and a chance to end the game, a chance they squandered last week, they converted the third down they needed.

"It’s a building block for us mentally, where we are as a team emotionally, just being able to say, 'Hey, we did it. We finished the game and we were able to come through at the end,'" Ragnow said. "We just have to keep building off it."

There's still some work to be done in the run game, but the offensive line was mostly pleased with its performance in Detroit's first win of the season. That's good news for the Lions, who want to build their team down the middle on both sides of the ball. It starts at center on the O-line, where it looks like Ragnow is here to stay.