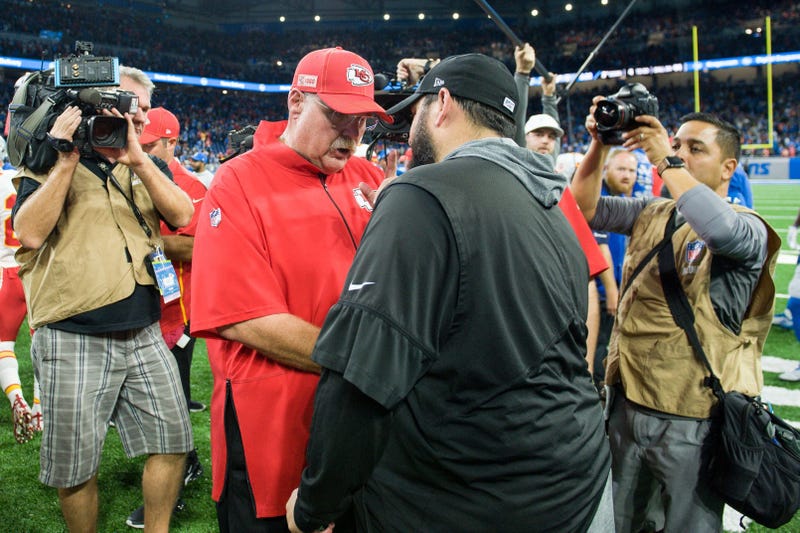 If a message can be sent in a loss, the Lions spoke quite clearly Sunday against the Chiefs.

This team is not to be taken lightly.

The Lions fought tooth and nail with arguably the best team in the NFL, throwing punch after counter punch in front of an electric home crowd. They came up short in the end, 34-30, but not before putting the Chiefs -- and maybe the rest of the league -- on notice.

"They’re a good team," said LeSean McCoy, who put up 56 yards and a touchdown on 11 carries. "They come from that Patriots pedigree."

That Patriots identity is most evident on defense, where on Sunday the Lions slowed the Chiefs' dynamic passing attack by taking away the big plays. They also forced three fumbles by swarming to the ball, adding to their league-high total of six.

And they did it for most of the game without two of their best defensive players in Darius Slay and Quandre Diggs.

"They played well," said McCoy. "A lot of it was turnovers. That kept them in the game. They got the ball out, they punched it out a lot. They played tough, they played hard, they played aggressive. They're a good team."

Quarterback Patrick Mahomes entered Sunday with 10 touchdowns and a passer rating of 134.9 this season, both NFL highs. He was kept off the board for the first time since Week 5 of last season and held to his lowest rating (81.0) since that same game.

The Lions refused to let Mahomes beat them over the top, like he's done to so many other teams. He went 0-9 on deep throws, the first time in his career he's been shut out in this department.

Patrick Mahomes was efficient when targeting the short to intermediate part of the field, but failed to complete a deep pass (20+ air yards) on 9 attempts.It was Mahomes' first game of his career without a deep completion.#KCvsDET pic.twitter.com/erVnJ2Nlyo

Nothing the Lions did on defense necessarily surprised the Chiefs, Mahomes said. But he was impressed with their ability to do it well.

"They just executed at a high level. They found ways to get the ball out of our hands, to get fumbles, and they found ways to take away some of the stuff that we like to do," Mahomes said. "I feel like there were still plays to be had that we didn’t execute on there, but that’s a good football team. They hadn’t lost a game for a reason."

The Lions were dialed in from the start. They jumped out to a 10-0 lead and held Kansas City to 13 points in the first half. Chiefs cornerback Bashaud Breeland said it was clear right away that Detroit meant business.

"They started punching us in the mouth early," he said. "They came with the energy first half, first quarter, so we had to find ways to slow them down. They're home, they got the crowd behind them and they were feeling energetic."

The big swing came in the third quarter when Kerryon Johnson fumbled at the goal line and Breeland picked up the ball and ran it back 100 yards for a touchdown. That was after Matthew Stafford coughed up the ball at Kansas City's six-yard line the drive prior. Two drives deep in the red zone, zero points.

Who knows how the game ends up if the Lions capitalize on those chances.

"Turnovers really helped us out," Breeland said. "Everybody had a slow start, and that kept us in the game. If we didn’t create those turnovers the game could have really gotten out of hand."

If there's a reason the Lions were unbeaten before Sunday's game, there's a reason the Chiefs are 4-0 after it. Good teams find ways to win, and that's what Kansas City did, right down to Mahomes' 15-yard scramble on fourth-and-8 inside two minutes to play. Nonetheless, the Lions have the look of a good team themselves.

They lost the game, but made a strong statement in the process.

"My hat goes off to Matt Patricia for the job that he has done," said Chiefs head coach Andy Reid. "We saw this on tape, so this wasn’t something we came here not knowing. He has done a phenomenal job with this football team. The personnel guys have brought some good players to go with that. This is a well-coached football team right here.

"Again, my hat goes off to them for the job he has done. The Lions are in a good place with him at the helm there."