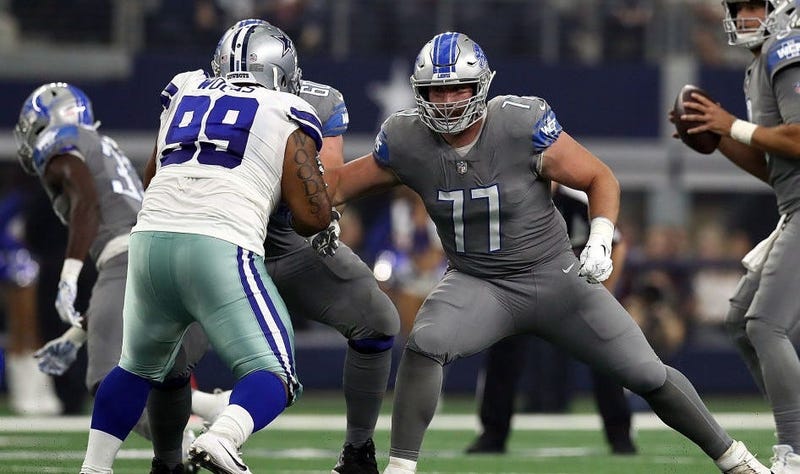 As the Detroit Lions close out the second week of OTA’s, there hasn’t been a lot of personnel changes on the offensive line.

The Lions have has Taylor Decker, Kenny Wiggins, Frank Ragnow, Graham Glasgow and Rick Wagner as the first team starters at practice the last two weeks. It’s a pretty safe bet that those five will be the wall between Stafford and the opposing pass rushers at the start of the 2019 season.

It shouldn’t come as a surprise though, seeing that quintet were the starters at the end of the 2018 season. However, there has been some shifting.

Last week, the Lions created a stir when they moved their 2018 first-round pick, Frank Ragnow, from guard to center. As a rookie, he started all 16 games as a guard, but was a four-year starter at center in college. Lions are hopeful that his transition from guard back to center will come naturally.

With Ragnow moving inside, it pushes Glasgow, who has primarily played center during his Lions tenure, out to the guard spot. During hi\three seasons in Detroit, Glasgow has been praised for his versatility. Lining up at guard will be nothing new to Glasgow, he’s spent some time at guard in college and has taken snaps for Detroit as a guard.

Opposite of Glasgow will be Wiggins, who was thrust into the starting role last year after now retired T.J. Lang missed nearly the whole season due to injury. The 30-year-old was on the field for 74 percent of the Lions snaps last season and was called for only three penalties.

Zero change for the pillars at the end of the offensive line. Decker and Wagner will resume their roles at tackle.

Decker’s been a staple at left tackle since Detroit drafted him in the first round of 2016. He rebounded well from a injury that kept him out of eight games in 2017. Decker, along with Ragnow, were the most penalized offensive lineman for Detroit last season, with five penalties a piece.

Wagner, who signed with Detroit in 2017, has yet to play a full season in the Motorcity. He’s missed four games over the past two seasons. When he plays, he’s been very dependable as a right tackle, but he needs to stay healthy. Barring an injury, should continue holding down the right side in 2019.