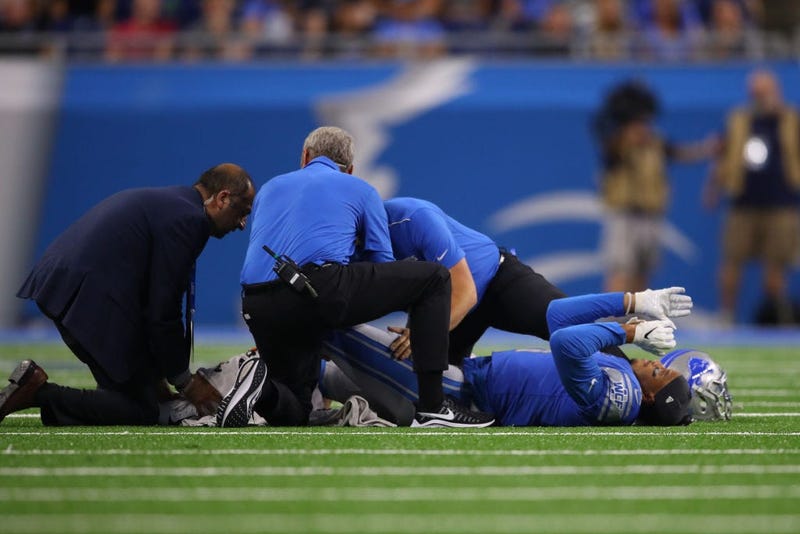 To add injury to insult, the Lions walk away from the 31-3 thumping from the New England Patriots with more than a bruised ego.

Wins and losses don’t seem to matter when it comes to the NFL preseason. The 0-16 Lions were undefeated in preseason, so it’s not a precursor to the regular season. The main concern is that everyone is able to escape healthy.

Unfortunately for Detroit, five players were unable to return to action due to injury concerns.

The most gruesome injury, and the one that will have the most impact on the regular season, happened to Jermaine Kearse.

Here’s a video of the injury. Tread with caution. You’ve been warned.

Oh no Kearse! Do not watch pic.twitter.com/vwPx8S1IJ5

If you’re a little queasy when it comes to broken bones and don't want to watch, here’s a breakdown of the ordeal.

While Kearse was blocking downfield, a Patriots defender jumped to tackle running back Ty Johnson. The defended missed and landed right on Kearse’s leg, leaving it mangled beyond belief. According to NFL Network’s Ian Rapoport, Kearse has both a broken leg as well as an ankle injury.

#Lions WR Jermaine Kearse, who was carted off earlier, suffered a broken leg and also associated injuries to his ankle, source said. In what was supposed to be a bounce-back year, it’s a brutal injury instead.

Kearse signed with Detroit this offseason, primed for a revenge tour after two down years, but his outlook for 2019 is not good.

Matthew Stafford’s backup, Tom Savage, watched the rest of the game from the sideline following back-to-back sacks. Savage’s head bounced off the turf on the second sack.

Third-string running back Zach Zenner spent some time in the medical tent and didn’t return.

Defensive tackles Darius Kilgo and P.J. Johnson both suffered leg injuries that landed them in the locker room.

The Lions turn their attention to the Houston Texans, who they will play August 17, in hopes of having a better performance and to walk away healthy.