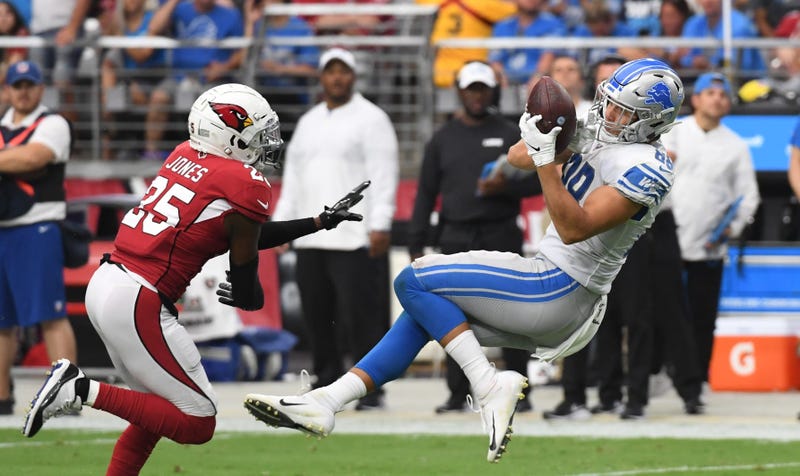 97.1 The Ticket -- The Lions lost rookie tight end TJ Hockenson to an apparent head injury near the end of the third quarter of Sunday's loss to the Chiefs.
Hockenson, the No. 8 overall pick in this year's draft, attempted to hurdle a pair of Chiefs defenders in the red zone, but they remained standing and upended Hockenson mid-air, before he came down and landed on his head.

The hurdling phenomenon may have just come to an end. TJ Hockenson is hurt after this play pic.twitter.com/Dv4pGGCD5W

The team announced he would not return to the game, with a presumed concussion. He was slated to undergo further evaluation.

Hockenson laid on the field for several minutes before eventually sitting up and then walking to the cart that took him back to the locker room.

Hockenson recorded three catches for 27 yards and a touchdown before exiting the game. Detroit led Kansas City 23-20 at the time of his injury.

After the Lions took the lead on a Kenny Golladay touchdown catch with 2:26 to play, quarterback Patrick Mahomes led the Chiefs 79 yards down the field and Kansas City regained the lead with 20 seconds to play, before holding on for the 34-30 win.