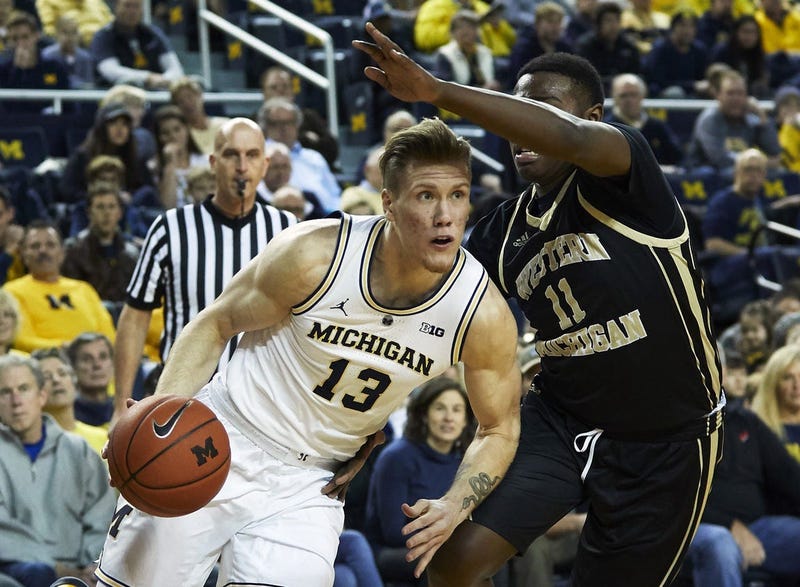 By the polls and popular consensus, Duke is the best basketball team in the country. That's the effect of having three of the likely top-five picks in the NBA Draft.

Lingering just below the Blue Devils is No. 2 Michigan, entering the weekend as one of two undefeated teams left in the country. The Wolverines don't have the same star-power, but they're as well-rounded a squad as you'll find. They're powered in part by freshman Ignas Brazdeikis, as confident a freshman as you'll find.

Brazdeikis, Michigan's leading scorer and a midseason candidate for the Wooden Award, wants a shot at the team everyone's been talking about.

Asked on Friday if he ever imagines how Michigan would match up, Brazdeikis said, "Yeah, I would love to play Duke, I feel like along with a bunch of (my) teammates, because they got that No. 1 team and that No. 1 hype and we feel like we’re definitely better than them.

"We’re just looking forward to playing every single team. We're not scared about no competition, so we want to play them all."

Between Zion Williamson, RJ Barrett and Cam Reddish, No. 1 Duke is flat-out loaded. Williamson, widely considered the best player in the country, is a human highlight reel. You can find him on SportsCenter the morning after every game, dunking on some helpless soul.

So, if Michigan were to play Duke in March, would Brazdeikis like the challenge of guarding Williamson -- or would he pass that off to Charles Matthews, one of the Wolverines' best defenders?

"I would love to guard Zion," Brazdeikis said with a smile. "I’m not scared about no competition. I’ll guard anyone."

Brazdeikis actually played against Williamson at the adidas Nations Tournament in 2017, though he said he never guarded him one-on-one. He also played against Barrett and Reddish on the recruiting circuit, and at one point he and Barrett were teammates. They're still good friends, Brazdeikis said.

Whereas Duke is chock-full of future NBA stars, Michigan has maybe two 2019 draft picks on its roster -- Brazdeikis and Matthews. Neither one is projected to be a lottery selection. But right now, with so much left to decide this season, that's not on Brazdeikis' mind.

Depending on the results of this weekend's games, Michigan could overtake Duke at the top of polls. The Blue Devils lost earlier this week to Syracuse and host No. 4 Virginia -- the nation's other undefeated team -- on Saturday night. Michigan plays at Wisconsin Saturday afternoon.

As much as he's trying to stay focused on the present, Brazdeikis smiled and said the thought of being ranked No. 1 has entered his mind.

"Yeah, it excites me a lot. That’s crazy, being the No. 1 team in the nation. ... It’s just exciting knowing that we’ve worked so hard and now it’s kind of starting to show across the nation and everyone’s taking notice," he said.

For Brazdeikis, there was never a doubt. Asked when he knew Michigan had the makings of a No. 1 team, he said, "As soon as I stepped in the gym."

"I feel like our team's No. 1 always," he went on. "That’s the kind of competitor I am, so I felt like we were No. 1 right away and now it's coming to realization. I visualize this stuff all the time. I visualize how I'm gong to play, I visualize how we’re going to win and so far it's been going good."