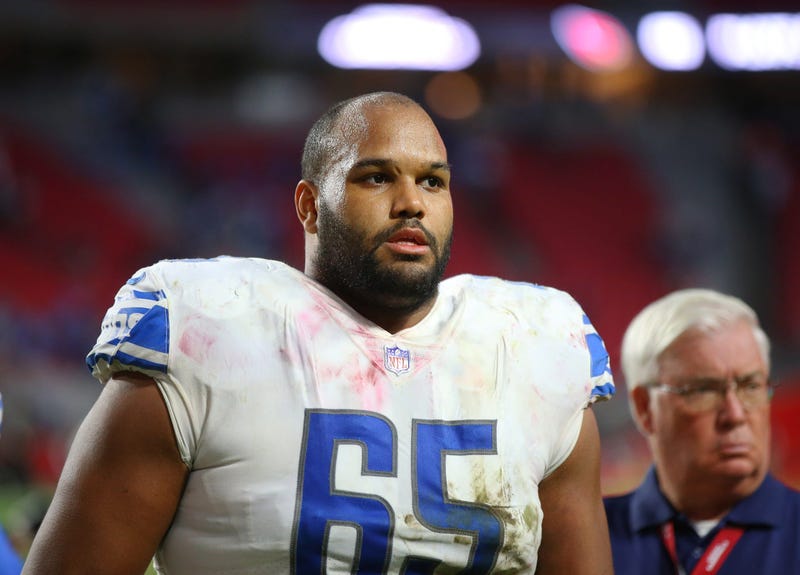 After spending the bulk of his afternoon trying to contain Joey Bosa and Melvin Ingram in his first career start at left tackle, Tyrell Crosby was worn out. He was still sweating when he spoke to reporters in the locker room, some 30 minutes after Detroit's 13-10 win over the Chargers.

Asked to describe the feeling upon converting the first down that sealed the game, Crosby let out a weary laugh.

"Just, finally," he said. "Just a sense of relief knowing that we just really put the nail in the...whatever. I forgot the term, I’m tired."
Nail in the coffin?

"Nail in the coffin, thank you, and that we're getting to do the best play in football -- the victory formation and the QB kneel," Crosby said.

Crosby was as essential to that formation as anyone, stepping in for injured left tackle Taylor Decker and helping keep Matthew Stafford on his feet. He gave up just two pressures while battling one of the most dangerous pass-rushing duos in the NFL, part of a solid effort by Detroit's offensive line that saw the Chargers held without a sack for just the second time in their last 42 games.

“First look, we’ll obviously be happy with everything from that standpoint," said Matt Patricia. "I know that there are plays out there where we had some assignments and things like that that we have to clean up. Again, Crosby stepping in and the rest of those guys kind of rallying behind all of it and just getting everybody going in the right direction.

"It goes back to the work during the week."

And it goes back to the 2018 draft, when the Lions took Crosby in the fifth round. They didn't have a need at the tackle position at the time, but Patricia and Bob Quinn thought the value was too good to pass up. Crosby, the Pac-12 Offensive Lineman of the Year, was projected to go in the second or third round.
Anyway, there's always a need on the O-line. If and when the Lions suffered injuries up front, they'd be glad to have Crosby waiting in the wings. Late last season, Crosby filled in at right tackle when starter Rick Wagner went down with a concussion. And when Decker was ruled out with a back injury on Sunday, here came Crosby at left tackle.

He swam when others may have sunk. In fact, as the game wore on and Crosby warmed to the challenge, the Lions largely let him handle Bosa and Ingram on his own.

"They’re very talented rushers, have a huge amount of respect for them," Crosby said. "It was a privilege to go against them and just learn and try to get myself better."

It might seem like the kind of game that would boost Crosby's confidence, but that would suggest he was lacking it in the first place.

"Honestly, I don’t really try to think like that. My mindset is, if I'm in the game starting or just swing tackle or whatever I need to do, I'm going to do it at my best," said Crosby.

Remember, this is a guy who expects to succeed. Crosby didn't allow a single quarterback hit, much less a sack, during his senior season at Oregon. Then he slipped on draft day, perhaps due to a vague history of concussions, and the Lions were the team to benefit.

No, Crosby wasn't perfect on Sunday. His run blocking left a good deal to be desired. And no, he hasn't stolen the job from Decker at left tackle. But in his task that mattered most protecting the quarterback's blindside, Crosby gave the Lions all they could have asked for.

And the O-line as a unit had a bounceback performance after a disappointing season-opener.

"It was great. I was really proud of those guys," said Stafford. "There were some moving parts, not only in the game, but also just all week in practice, trying to get a couple guys ready to play, maybe some different spots.

"I thought we ran the ball really effectively. And in the pass game when I was in the pocket, the only time I got out and ran over to their sideline, I probably should have stayed in there. It was a really good day for those guys up front."

It ended with a first-down pass to tight end Jesse James, who snuck around the left side of the line to put the nail in the ... coffin.

"It was just an awesome feeling," said Crosby.