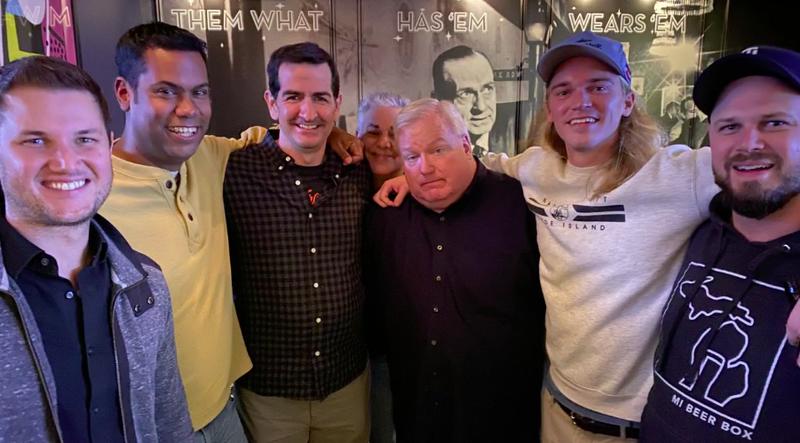 I wasn’t so sure about Jamie by first impression. I had already heard he was a ‘sports elitist.’ On this day, he was between segments of his show with Wojo, killing time outside the studio. I was sitting down the hall at my desk, new to town and new to The Ticket. I forget why, but he made a remark to someone in the office about his lean physique, something thick with male bravado. You think this is an accident? CrossFit every day, dude. I can’t believe I ever thought he was serious. I laughed about it later, and I laugh about it now, because Jamie made us all laugh a lot.

It’s been a little more than four years since I moved here from Connecticut. I haven’t met another person as good as Jamie. I don’t suspect I will. The more time I spent around him, the more time I wished he had. The more I got to know him, the more I tried to be like him. He was a model for any guy like me, a trusted voice in sports, a friendly face to the city, the husband of a beautiful wife and the father of three bright-eyed kids who just wanted to be like their dad. You talk about goals.

How do you sum up Jamie? He was the guy whose friendship made you proud. He was like a stamp on your name, which left an imprint on your heart. You held your head a little higher knowing you were friends with Jamie Samuelsen – knowing he was friends with you. My family visited for Thanksgiving last year and I couldn’t wait to introduce them to people like Wojo and Hammer and Dan Miller. Most of all, I wanted my parents to meet Jamie. I wanted them to know I was doing alright.

I called home with the news on Saturday night, and it shook a household 500 miles away. My older sister sent me a text a short while later. She said she remembers Jamie “at his happiest and very best on Thanksgiving morning watching his son make the game pick.” That would be Josh, who picked for his dad on the pregame show. Josh put his faith in David Blough and the Lions, because that’s what a good fan does. My sister is right. Jamie was beaming the whole time.

Jamie wasn’t quite beaming when I saw him last. He was too worn down after a 19-month battle with cancer. But as a group of us sat and talked with him a few days before the end, he smiled an awful lot. His was a sly grin, full of mischief. He even laughed a few times, and boy was it a joy to make Jamie Samuelsen laugh. Maybe you know for yourself. On a text thread, in person, through the radio, it left you flattered every time. It made you walk a little lighter for the rest of the day.

That’s what Jamie did. He validated the people around him. He was so smart, so witty and so kind – and so down-to-earth real – that he was a standard for everything good. If he laughed at your joke, you thought you were funny. If he complimented your work, you thought you were smart. If he brought an 18-pack of Bud Light to your party because he knew that was your beer, you felt like The freaking Big Lebowksi. (Different from The Big Wojnowski. He brought Gus’ Fried Chicken.)

How do you sum up Jamie? He was the guy everyone looked up to. Everyone. Doug Karsch, a damn good dude himself, told me Saturday night he considered Jamie his barometer. Anytime Jamie endorsed something Karsch said on the radio, Karsch said he felt like it must have been great. Because Jamie said it was. Karsch turned 50 last year. Jamie was 48.

In an interview last week, Pistons coach Dwane Casey called Jamie a “legend on the radio scene here” in Detroit. You could call him an exception, too. His words echoed, yet he hardly ever raised his voice. For 25 years he spoke with measured purpose. In a statement released Sunday, Red Wings coach Jeff Blashill commended Jamie’s warmth, civility and integrity. “We need more of that today,” Blashill said. Don’t we ever.

The funny thing about the ‘elitist’ shtick is that Jamie was more grounded than maybe anyone I know. He had encyclopedic knowledge about sports – about everything, really – but never flaunted it for effect. He talked about complex topics in smart, simple terms. One time he caught me slipping the word ‘indubitable’ into a headline, entirely for show. We laughed, and then I changed it and felt indubitably better.

So how do you sum up Jamie? He was just easy to be around. He left you in a better place than he found you, every single time. He left us for good far too soon, and that will hurt for a long time yet. But this town’s better for having known him. I only wish I had known him longer.