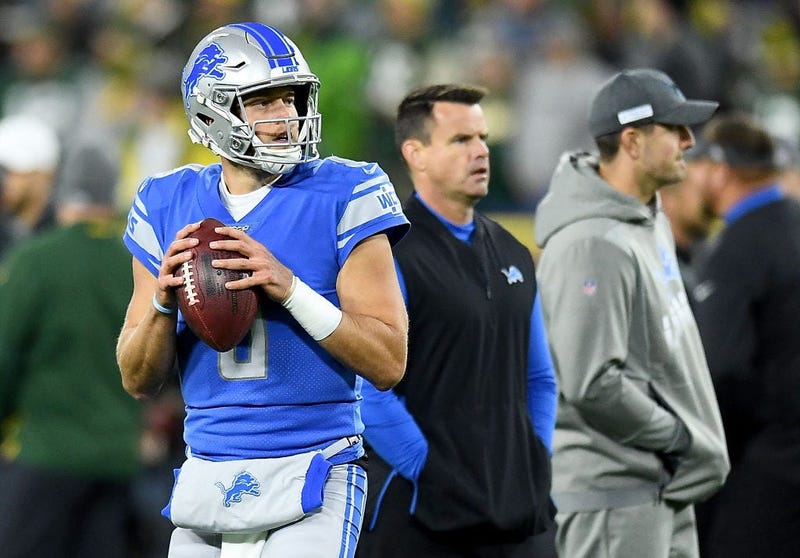 97.1 The Ticket -- A game that started with a bang ended with a mob of angry Lions fans -- and many others outside of Detroit fandom.
After the Lions were able to jump out to a 13-0 first-half lead in a hostile Lambeau Field Monday night against the Packers, Aaron Rodgers and Co. slowly battled back, culminating in a last-second field goal from Mason Crosby to send the Packers to first place in the NFC North at 5-1 on the season and the Lions to last place with a 2-2-1 record.

But was it just more Rodgers magic, or did the Packers get a little help from the officials?

ESPN analyst Booger McFarland certainly thought so, ripping officials on the broadcast as the clock wound down after Trey Flowers was called for a seemingly non-existent illegal use of hands to the face penalty -- for the second time in the fourth quarter.

One of the penalties against Flowers -- who had never been called for a hands-to-the-face penalty during his tenure with the Patriots -- set the Packers up for a touchdown. The other set up the game-winning field goal. McFarland ranted about the call, after Flowers seemingly had his hands inside David Bakhtiari's shoulder pads and not on his facemask.

If anything, Packers LT David Bakhtiari had HIS hands in Trey Flowers' face on these two plays #DETvsGB pic.twitter.com/exnuYckIJK

McFarland later doubled down during a SportsCenter appearance with Scott Van Pelt, who also took the time to point out mistakes by the officials.

"If you're the Lions, I assume the league is gonna say, 'Hey, sorry.' But this is a league where sorry's not good enough," Van Pelt said. "And that's a bad call, and it appeared several of them."

Yes, the Lions wound up with five field goals in a game where turning three-point drives into six-point drives paints an entirely different picture of this game -- and as a result, the outlook of the Lions' season moving forward. There's no excuse in most instances -- save, perhaps the 54-yard field goal Matt Prater kicked after a challenge overturned a Kerryon Johnson catch and fumble out of bounds that gave Detroit a first down, stalling the drive.

After review, the ruling of a catch in #DETvsGB is changed to an incomplete pass. Al Riveron explains: pic.twitter.com/sMsvrWqYYl

The Lions should not be let off the hook entirely for losing Monday night. Blame can be pointed at the defensive line for letting Jamaal Williams run rampant. Or failing to get consistent pressure on Aaron Rodgers. The Lions' running game couldn't get going. There were plenty of opportunities to put the pedal to the metal and ice the game away. There's no denying that.

Even McFarland acknowledged the Lions do need to take some ownership for the loss.

"They had a lot of red zone opportunities and they kicked field goals. But in the end, Trey Flowers gets two bad calls against him. And listen -- I get it, the officials have a tough job -- but we as players, we only get 16 shots at this," McFarland said.

Many on social media felt the Lions certainly have a gripe with the officials after Monday's game. And the fans aren't the only ones calling out the officials -- media, former players, and more took issue with Monday's officiating.

A look at social media's reaction to the Lions' loss:

Oh my god. Booger McFarland destroying the refs for another penalty for hands to the face on Flowers. Incredible. He’d never been called for one in his career. Two tonight. Black swans everywhere as Lions truly get screwed

Here's what incompetence in officiating does: It gets people thinking that the league may be getting back at Lions coach Matt Patricia for wearing the Goodell clown nose T-shirt after Super Bowl LI. While extremely unlikely, horrible calls open the door to conspiracy theories.

Al Riveron is a nice man but...league officiating is too often a mess since he took over. Tonight was dreadful. NFL. needs to call Dean Blandino, write him a big check, and get him back. Officials loved him & league needs him. That is all.

The NFL changed all its replay rules to avoid impacting games and they just handed the Packers a game.Lions might miss the playoffs over this.

--4 major blown calls tonight , all four went against the Lions. DB going for the INT called for Unnecessary Roughness. A non call on a blatant DPI . Then two ridiculous calls for hands to the face. Refs can’t guess and can’t get these wrong. Lions would’ve won by 2 scores @NFL

When one of the classiest guys in NFL history weighs in .. there’s a problem. https://t.co/dEVo1vQUNc

Don’t blame us Detroit. We're not the ones who pushed the “refs are trash” button.