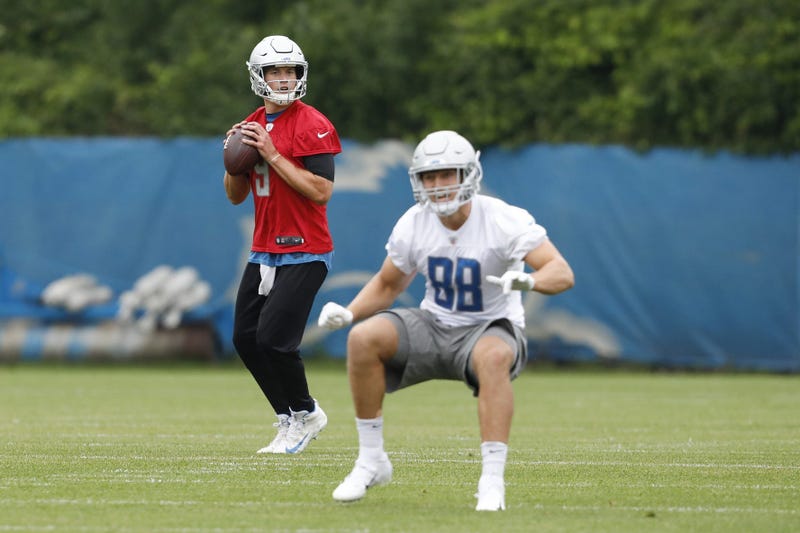 Better players, Quinn said. A better scheme. Forgive him if you've heard these things before.

Quinn followed through in the offseason, drafting T.J. Hockenson eighth overall and signing the likes of Danny Amendola, Jesse James and C.J. Anderson. And now Stafford is going back to work under the fourth offensive coordinator of his career.

Here's what we know so far about Darrell Bevell. He won't rely so heavily on Stafford's right arm. This is going to be a run-centric offense, no matter how pass-centric the NFL has become. Stafford feels things slowly coming together, with the start of the season about a month away.

"I think terminology, scheme, assignment-wise, yes," he said Tuesday after the Lions' second practice with the Patriots. "I think guys are more and more comfortable. We still have to execute at a higher level on a more consistent basis, but I’m probably going to say that until the last day I play football."

The Lions might be shifting the emphasis toward the run, but they're not cutting Stafford out of the equation. They upgraded the pieces around him for a reason. Among those pieces, two have really stood out during training camp: Amendola and Hockenson.

Hockenson's best work, as advertised, has come in the red zone. On Tuesday he snared a touchdown from Stafford on the last play of a drive that began near midfield with 40 seconds on the clock. Stafford thrust his arms in the air after the catch and ran to congratulate his new tight end in the end zone.

"He’s a talented player," Stafford said. "We've got a lot of talented players on offense. It’s tough for young guys to step in and make plays early on, and we’ve had some guys show up and do that. That’s fun as a quarterback to have a lot of weapons."

Weapons were exactly what Stafford lacked in the second half of last season. And at tight end, the Lions were limited all season long. That had as much to do with Stafford's dip in production as anything.

With Hockenson and James, the Lions should be able cause the kind of matchup problems that weren't in their repertoire a year ago.

"Just another element for defenses to defend, the more weapons and guys that are quote-unquote 'mismatches' on the field," Stafford said. "We’ve got those kind of guys at every position it seems like. Talented tight ends, talented receivers, talented backs. The more of those guys you can get on the field at one time, the better."

If Hockenson has looked mature for a rookie, Amendola has looked spry for an 11-year vet. He's said he feels as fast as he ever has in his career. As he steps into Golden Tate's former role in the slot, he's shown plenty of early chemistry with Stafford.

They've hooked up multiple times in camp on the kind of quick routes that were once Tate's specialty.

"I think he’s doing a great job of separating," Stafford said. "He’s always had quickness and speed. He’s got great feel, intelligent player. And talk about a competitor, man. That guy loves to compete, so it’s a whole lot of fun to be on the same side of the ball as him."

Add Amendola and Hockenson to a group that also features Kenny Golladay, Marvin Jones and Kerryon Johnson, and Stafford appears to have weapons galore. He might not be the star of Detroit's offense like he has in the past, but he'll still have a leading role.