In his first meeting with the media since last season, it took Jamaal Williams a few words to mention the two he's focused on this season: Super Bowl.

"It’s just really us coming with a new mindset, coming with it already, knowing that we’re going for the Super Bowl," Williams said Wednesday as the Lions continue their offseason training program in Allen Park. "We gotta have that mindset now before anything."

Those are bold words, Super Bowl, for a team coming off a three-win season and its fourth straight last place finish in its division. But Williams is a bold player. He's a bold thinker. He doesn't want the Lions to limit themselves in 2022 because of what they did, or didn't do, in 2021.

"We all need to come together. We know what we went through last year: adversity. This year, we just gotta take what we did last year and make sure that we bump things up, know what I mean? Push it up, be better, be greater," Williams said.

The veteran running back is entering his second season with the Lions, his sixth in the NFL. He became familiar with winning in Green Bay where he went to the NFC Championship in back to back seasons before coming to Detroit. Last year he became familiar with losing. Williams rushed for a career-high 601 yards, but endured double-digit losses for the first time in the NFL. Now he's eyeing double-digit wins, a turnaround of epic proportions. His said his belief is fueled by "my teammates and coaches."

"As long as everybody has the one mindset of, 'We’re going for the Super Bowl, we’re going to win the Super Bowl,' we gotta be able to get to the playoffs, but our main goal is to get that ring. And it’s going to come with all of us just staying together," Williams said. "There are a lot of people on this team that are even more excited than I am about what our goal is and what we want to do this year and how special we want to be."

It's hard to be more excited about anything than Williams, the most buoyant player on the Lions roster. He runs downhill and smiles at every turn. But Williams kept a relatively low profile last season as he found his place on a new team. This season, he intends to be more vocal. In his quest to change the Lions, Williams is changing himself. 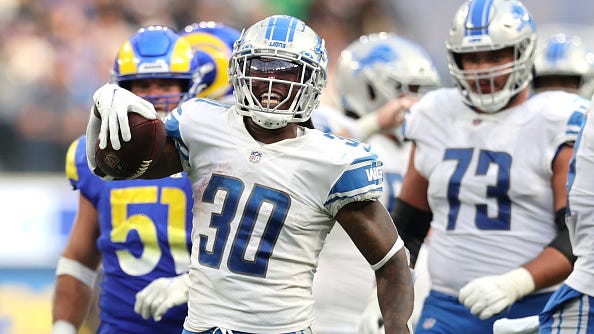 "Now I’m a leader on the team," he said. "I’m one of the vets on the team now where I gotta show by example and sometimes I’m going to have to talk. And I don’t like talking, I really don’t. I’d rather just show it on the field and do it that way, but I gotta take steps to improve. If you want to improve, you gotta change things. Sometimes you get comfortable where you’re at if you don’t want to improve, but I do.

"One of my things I gotta improve on is talking a little bit more. If I gotta talk in the huddle more, if I see a teammate down, help him out a little bit more, I just gotta be a little more aware to my surroundings, my teammates, my coaches. I feel like I can give a lot more, and I am."

The Lions will need a lot more from all of their vets this season to even sniff Williams' goal. They'll need a major boost from their newcomers. And they'll need everything else to break in their favor, and even then it might not be enough. They were the second worst team in the NFL last season, and the same core of players is back.

"I got great people here who wanna play," he said. "I got great teammates, great coaches and other people who want to be Super Bowl champions. We all have the same mindset and we just gotta put it all together now, and we are. We’re going to do it this year."