Jared Goff says he blocks out the noise, ignores the critics. But he clearly heard the biggest knock on the Lions' offense last season. Asked Tuesday about his success throwing the ball downfield so far in training camp, Goff deadpanned, "No, we don’t do that here. We don’t throw it down the field at all."

To be fair, this was true for most of last season. Limited by a feeble cast of receivers, a scheme that didn't suit him and his own poor play, Goff, a two-time Pro Bowler in LA who once led the NFL in yards per completion, became the dink and dunk king in Detroit. He ranked last or close to last in yards per attempt through the first nine games of the year before an injury sidelined him for a week in November.

When Goff returned, Dan Campbell had taken over play-calling duties from former offensive coordinator Anthony Lynn -- who had been out of sync with Goff from the jump. And Campbell had elevated former tight ends coach Ben Johnson to passing game coordinator. From that point on, Goff was quietly one of the best quarterbacks in the NFL.

His passer rating jumped from 84.0 over his first nine games to 107.1 over his last five. Maybe more noticeably, he jumped from 6.3 yards per attempt to 7.1. This also coincided with the arrival of an actual deep threat in Josh Reynolds, who had spent four seasons with Goff in LA. They picked up where they left off.

The Lions brought Reynolds back in the offseason. Then they signed DJ Chark and drafted Jameson Williams 12th overall, GM Brad Holmes making good on his promise to get Goff some more weapons. At the same time, Campbell named named Johnson the Lions' offensive coordinator. Johnson and Goff spent the next several months crafting a passing attack that would
allow the quarterback's talent to shine.

It has shined this summer. It shined especially bright on Tuesday when Goff uncorked a number of well-timed deep balls, including a 60-plus-yard bomb to Kalif Raymond. He also linked up with Chark on a long touchdown pass despite tight coverage in the end zone. When looking downfield in training camp, especially to either Chark or Reynolds, Goff has looked, dare we say, dangerous. How much of this owes to a vulnerable Lions' secondary remains to be seen.

Sounds so simple. And in some ways it is. Goff has three receivers who can consistently get open and/or make contested catches in Chark, Reynolds and Amon-Ra St. Brown, without mentioning tight end T.J. Hockenson. And he has a healthy offensive line in front of him that's giving him time to read the field.

"It’s been huge," Goff said of the protection. "It starts in the run game, like we’ve always said. When we’re able to run the ball well, the play-action game will make the protection that much better. And then those guys are starting to gel up front. We’ve seen it week after week get better and better. I think they feel pretty good about it and I know I feel good about it." 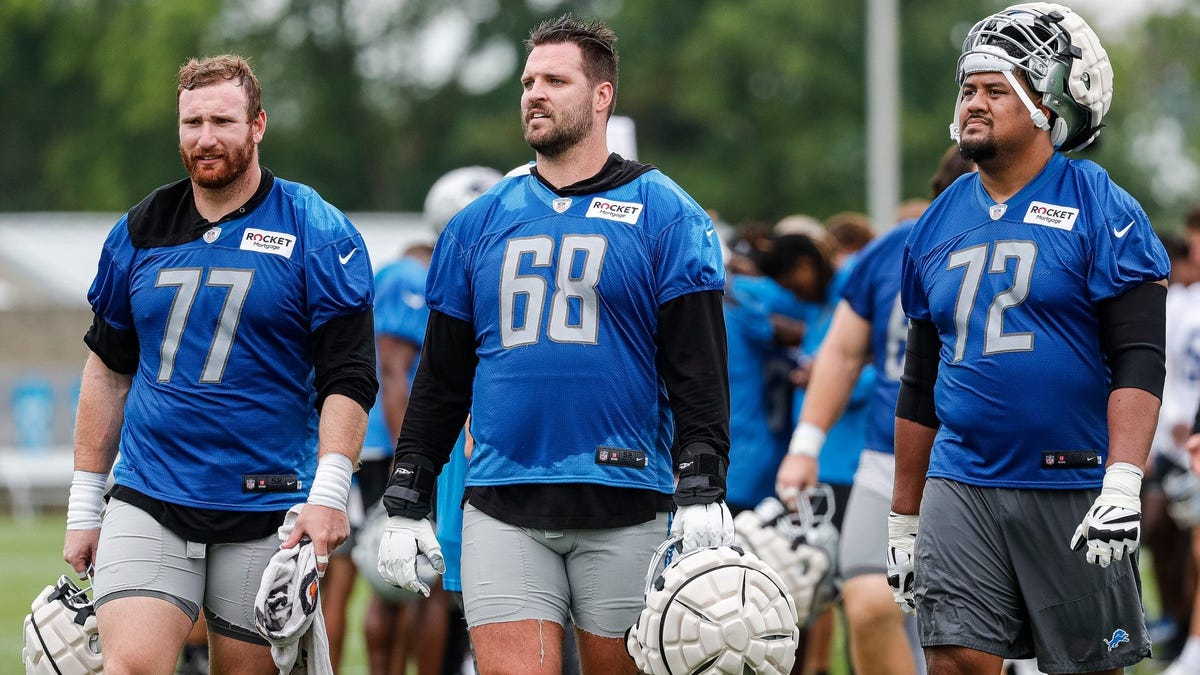 Johnson should not be underestimated here. With respect to Lynn, the Lions' offense looked out of sorts under his direction. It looked stale and easy to stop. It looks different under the 36-year-old Johnson, namely more aggressive. Backup QB Tim Boyle said Tuesday "the atmosphere out here offensively is incredible."

"And you guys see on the field, we’re making plays right now," he said. "We’re starting to hit our stride."

Boyle was here last season when Johnson took over the passing game. He can't say enough good things about him now. He said Johnson's "energy" is the first thing that stands out, along with his "composure and clarity." Clarity was lacking for the offense last season. Not anymore -- at least not in camp.

"He’s made it very specific for us quarterbacks as for what he’s looking for on what plays and what we have to look for from the defense," said Boyle. "Ben has been a breath of fresh air, he really has. He’s extremely organized and he’s fundamental-oriented. He's youthful, he's energetic and we love being around him. He’s one of those unique coaches who can coach every position on the field, which is tough to do in the NFL."

For all their progress in the second half of last season, the Lions finished 25th in the NFL in scoring offense. In the passing game, they finished 26th in yards per attempt. If they've truly learned to 'throw it down the field,' they'll have to prove it to their critics -- not that Goff ever heard them.

"We don’t really care," he said. "Just throw it to who’s open when we have to, take care of the ball, most importantly, and let you guys tell us if we’re good or bad."