Former professional basketball player John Amaechi, who became the first known active or retired NBA player to come out as gay in 2007, has lauded Las Vegas Raiders defensive end Carl Nassib for coming out, which he revealed on social media on Monday.

The 50-year-old Amaechi, appearing on the Dan Le Batard Show, said Nassib is a "force for good," and that his announcement has undoubtedly given hope to young LGBTQ people struggling with coming out. 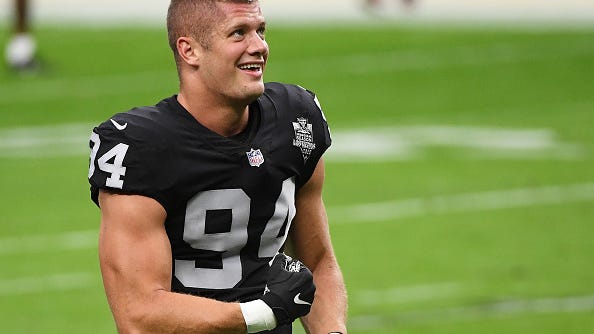 "This young man is a force for good -- what he has done today," Amaechi said. "There is a young person watching him right now, who has walked to school lighter. Even if they have disclosed nothing about themselves, they have walked to school with a greater sense of hope today because of this man. That is a good thing."

Amaechi, who played parts of five NBA seasons with the Cavaliers, Magic and Jazz, as well as several seasons in pro leagues overseas, said Nassib, the NFL's first openly gay active player, was right to speak his truth despite the backlash it will inevitably provoke from a small but vocal minority.

"As for stirring the pot, the pot is not stirred. My day is a cacophony of insults, racist abuse, homophobic abuse. That is my day. I wake up in the morning, and the first thing I do is block 20 people who have said something reprehensible. There's nothing hidden about this. Misogyny is open, wide open. Sexism, wide open. Racism, wide open. Xenophobia, ignorance as a character trait -- wide open.

"But, today, an NFL player has made at least one child feel hope. This is good."

“There is a young person with a greater sense of hope today because of this young man. That is a good thing.” - @JohnAmaechi discusses the impact of Raiders DE Carl Nassib becoming the first active NFL player to come out as gay. pic.twitter.com/mjBSew3PdG

In an interesting coincidence, both Amaechi and Nassib played collegiately at Penn State. Nassib, 28, is from West Chester, Pennsylvania. He was drafted in the third round by the Cleveland Browns in 2016.

Seven years after Amaechi first came out, Jason Collins of the Nets became the NBA's first openly gay player, in 2014.

Meanwhile, Nassib's announcement was met with support and congratulations from around the NFL, including Commissioner Roger Goodell, Raiders coach Jon Gruden, and countless players. Giants running back Saquon Barkley, a former teammate of Nassib's at Penn State, was among the first to offer well wishes.

Good for you Carl Nassib!! Live your truth brother.

As long as they helped us win and were great teammates- their sexual preference was never a issue..

We live in a different time now where diversity is much more accepted. Cheers Carl, and I hope this lets other athletes know, its OK to say who you are...👏🏽