DALLAS (105.3 The Fan) - Former Cowboys receiver Dez Bryant and the brother of Cowboys quarterback Dak Prescott are currently in the middle of a little Twitter spat over Bryant writing publicly that Prescott should solicit the advice of his former teammate Tony Romo to help him be able to read defenses better.

If you really want to keep it a buck…Dak need to call up Romo and talk about how to read Defenses so he can understand the D weaknesses on how to utilize his weapons in certain situations..

Bryant made it clear that he wasn't taking a shot at Prescott, saying that Dak earned his new contract, but that he just believes that the quarterback could be even better if he reached out to Romo.

If you know football you know I’m not bashing.. it’s too much talent in Dallas for them not to be playing yesterday or today….

I would have liked to win a Super Bowl with Romo on the field but I’m confident as ever if Romo was the OC for the Dallas with the defense they have… Dak will win the super bowl for the cowboys https://t.co/g4fozzeDoF

Bryant's suggestions, however, weren't appreciated by Prescott's brother Tad, who responded by taking a shot at Bryant and Romo's on-field success.

because @DezBryant & Romo won so many playoff games together. miss me with this shit

That comment sparked a wild back and forth between the two and has since resulted in Bryant sharing a text he received from Tad telling him that he and Dak "would appreciate it if you just kept his name and my name off your social media rants. ... This is why Dallas cut you and probably want you to stop ranting about us brother." 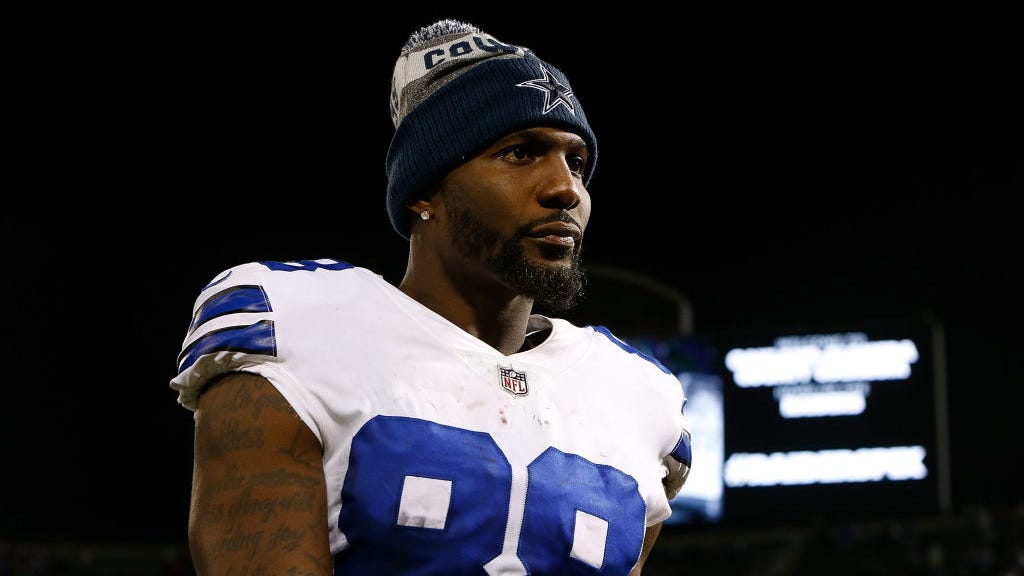 Dez Bryant on what he'd tell these Cowboys, Dak's growth as a QB, NFT projects

However, Tad denied that he sent that message, saying that Bryant created the fake text message because that's not his phone number.

Bryant has since deleted the tweet of the alleged message from Tad.

See the full exchange below.

I didn’t say anything false about what I said nor did I bash your brother…you sit yo ass on this internet and talk shit about everybody except the real issue… https://t.co/N6MmI1fxQU

I’m going to sit this right here @86Prescott you trippin…don’t let these folks have you reading what I said in a negative way… I believe Romo can help your brotha.. I played with both guys…your Brotha got a opportunity to do what Romo or myself couldn’t do… I stand on it pic.twitter.com/HmK5TiXryk

@DezBryant and what did i say that was false. How many playoff games did you and Romo win. I’m not here for beef, nor did i say shit to you

@DezBryant is the same guy who’d smile & hug me while talking shit about Romo, Witten, & those he called Romo’s boys. Now you turn on Dak, and myself. to think, I truly used to respect this man

@DezBryant what did I say that was false? How many games did you and Romo win together. I saw you’re message where you asked I not let fans fool me, but than you address me directly after I hadn’t said shit. I’m not here for beef but you’re a 🤡 bro. 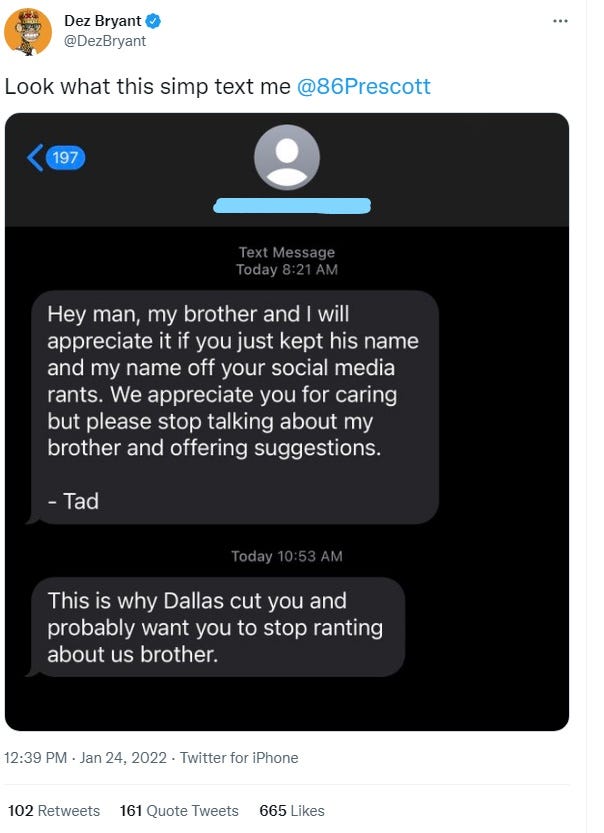 @DezBryant you're as fake as they come. Doesn't mean shit to be the realist in the room, if you're the only one in it. Also you're fake ass post of our supposed text conversation proves it. you have my real number, same 1 you text begging for my help for Dak to help with PP

I have 2 phones and thats not the number for either, nor is this me messaging him.

You get on this internet and Lie you sensitive girl.. Tad I ain’t never held a conversation with you talking about another player… I always spoke loud about mine… https://t.co/ZaOLXqBr80

I never said nothing bad about Dak… I’m on the internet analyzing like everybody else… you got Pearson talking about dak ain’t no 40min QB and other people ripping Dak.. why wouldn’t he call Romo for help? https://t.co/qw06kBys4G

This Dude a girl man.. the fact he got on Twitter and lied especially making it seem like I talked to him about Romo or Witten.. We aint never had a convo.. Tad and I never talked like that..we ain’t cool.. I address my frustration about certain players publicly .. tad cap https://t.co/iPQrSrcLdj

Man you can’t be serious…quit the cap I don’t know how to edit… this came from you… quit the cap Dude… Tad Dallas ain’t that big… https://t.co/LmUHmgMynx