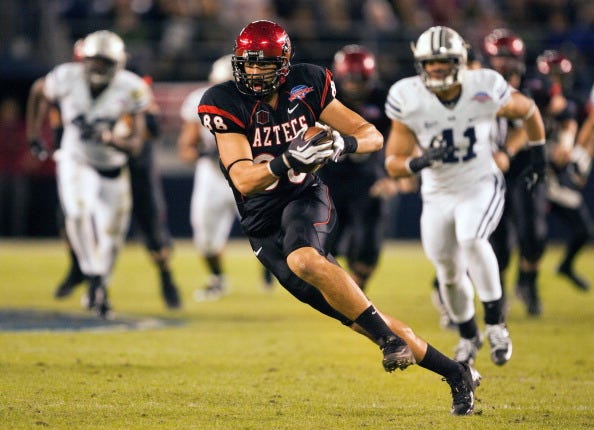 Former San Diego State tight end Gavin Escobar tragically passed away Wednesday in a rock climbing accident, along with Chelsea Walsh. The accident happened at Tahquitz Rock near Idyllwild. Escobar played for the Aztecs from 2009 to 2012, before being a 2nd round pick for the Dallas Cowboys. Escobar played in the NFL from 2013 through 2018 for the Cowboys, Chiefs, Ravens, Browns and Dolphins. After retiring from the NFL, Escobar became a firefighter in Long Beach.

"Our thoughts and prayers go out to Gavin's family. I know his wife, Sarah, and daughters, Josey and Charlotte, were everything to him. Gavin was a great man, father, son and teammate, and will be deeply missed by all," said San Diego State Head Coach Brady Hoke.

"We are devastated to hear about the passing of Gavin Escobar. Gavin was the epitome of a student-athlete, and a leader on and off the field. Our thoughts and prayers are with Gavin's family in this incredibly difficult time," Director of Athletics John David Wicker said.

It is with deep sadness that we announce the off-duty death of Long Beach Firefighter Gavin Escobar. Hired on February 5, 2022, Firefighter Escobar was assigned to Fire Station 3 on B-shift. pic.twitter.com/pOgBFnwH9f