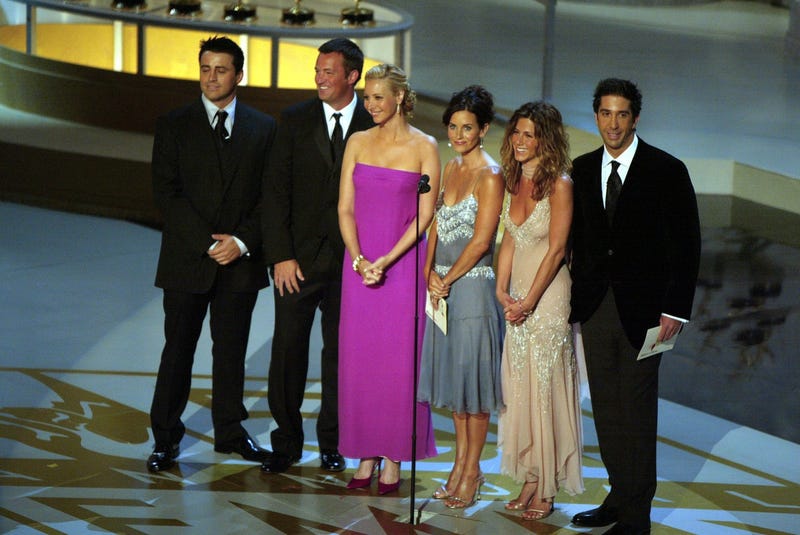 If you were in your teens & twenties in the 90s, you probably were obsessed with Friends. It's definitely in my Top 5 All-Time Favorite TV Shows! It didn't matter that no young adult could actually afford those huge apartments (like, what does Ross even do with all that room?) or that six such distinct personalities probably wouldn't even be that close of friends. Ending up in awkward situations, finding love, losing love & finding it again, getting out from under our parents' thumb, finding our own identities, and needing our friends were things we could all relate to.

With the newfound popularity of the show among Millenials & Gen Z, and the upcoming reunion that starts streaming on Thursday, May 27th, Friends is almost as popular now as it was during its peak in 2002. It's been 17 years since the final episode aired, and I still find myself using quotes from the show on the regular! If you know, you know.

So here they are...my Top 5 Friends Quotes That I Still Use Today!

It can mean an emphatic "YES!", "I agree with you", "I'm right and you're so wrong", "Thank you", and a number of other things, depending on the context and emphasis. It might be the most flexible phrase ever used on Friends, and it's definitely my favorite.

Although I actually think Ross is one of the most annoying characters on the show, he had some standout episodes, including the one where he, Chandler, & Rachel try to move his new couch up a very tight stairway. As he gets more frustrated, the "pivots" turn to "PIV_AHT!" and it gets funnier each time. If you haven't used "Pivot!" at least once when you've moved, you're just not doing it right.

The scene originally aired when Ross takes over "Ugly Naked Guy"'s apartment, which is directly across from Monica & Rachel's. Phoebe sees Chandler & Monica and starts waving, only to be ignored because they are getting hot and heavy with each other. It's the first time Phoebe realizes they are together and can't believe what she's seeing! The quote has come in quite handy to me over the years. I use it anytime I see something I don't want to or can't believe. Try it!

Joey Searches For The Hot Girl

In this episode, Joey is looking across the way at Ross' new apartment, and notices an extremely hot girl in the same building. She smiles and waves him over, but he can't get his calculations right and keeps ending up at the wrong apartment. By the end, he's wandering the halls wailing, "Hot Girl?!? Hot Girl?!?" This was a fun one to use back in the day when my friends and I would be out and notice a hot guy in the crowd.

While sometimes it seemed like Phoebe spoke nonsense, she was probably the smartest of the crew. For example, when Ross was lamenting that Rachel was going out on dates with other men, Phoebe told him to hang in there because "she's your lobster." Say what? Turns out, lobsters fall in love and mate for life. So if a couple is meant to be together, "he's her lobster." Awwwwwwww!

Friends had a million quotable scenes, and even though times have changed since it first aired in 1994, they still hold up today. Do you have quotes you still use from the show? Are you excited about the reunion streaming on HBO Max? Hit me up on Facebook or Instagram and let's talk Friends!

We strive to be a platform where varying opinions may be voiced and heard. The views, thoughts, and opinions expressed by the author(s) of this article and/or by those providing comments are theirs alone, and do not represent those of Audacy, Inc. We are not responsible for any damages or losses arising from this article and/or any comment(s).
Featured Image Photo Credit: Robert Hanashiro, USA Today