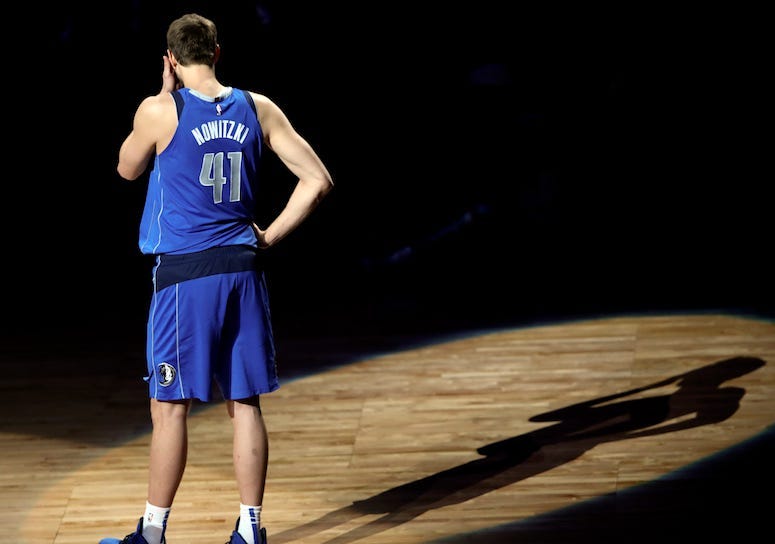 It was a night that, from the very beginning, was set up to be magical.

As soon as Dirk Nowtizki arrived to the American Airlines Center for the Mavs' final home game of the season against the Phoenix Suns, he was greeted by hundreds of AAC employees lining the tunnel under the arena.

there were literally hundreds of mavs and arena employees lined up to welcome Dirk to tonight’s game pic.twitter.com/oyr9J9tbO7

Then he went on a rampage, scoring the first 10 points for the Mavs, and ending the night with 30.

Dirk Nowitzki’s final two points of the night, amid roars at the AAC. #DirkForever | 41. 21. 1. pic.twitter.com/qmu5h3AfHV

Then, in a star-studded ceremony that included NBA legends Larry Bird, Shawn Kemp, Charles Barkley, Scottie Pippen, And Detlef Schrempf, Dirk called it a career, after 21 seasons for the Mavs, the most by any player for a single team in NBA history.

Dirk Nowitzki officially announces his retirement from the @NBA after 21 seasons with the @dallasmavs #MFFL | #NBA pic.twitter.com/Drdb1UiKOd

Following Nowitzki's speech, Mavs owner Mark Cuban had a few promises he wanted to make to the Baller from the G, one of which included the "biggest, most bad ass statue, ever."

1⃣ Dirk's lessons will live on w/ @dallasmavs
2⃣ A Job for Life, Guaranteed
3⃣ No. 41 will hang in @AACenter
4⃣ The 'biggest, most bad ass statue ever' pic.twitter.com/bpLEVrJNWu

The Mavs, and Dirk, have one final game, against the San Antonio Spurs, tonight in San Antonio.