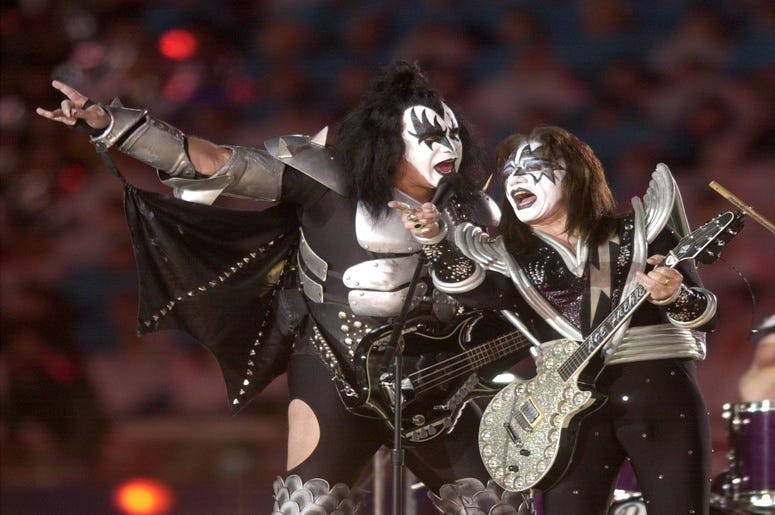 It looks like there won’t be a reunion of the original KISS lineup any time soon. As the band gets ready for their upcoming ‘End of the Road’ tour, a battle between Gene Simmons and former guitarist Ace Frehley has broken out. On Tuesday, Frehley wrote a scathing Facebook message about Simmons claiming he cost the guitarist millions, along with accusing Simmons of groping his wife, in response to a an interview Simmons gave to Guitar World.

Ace Frehley, who left the band in 1982, and temporarily rejoined the group for their 1996 reunion tour, recently said he would be willing to join the ‘End of the Road’ tour. However, after an interview Gene Simmons gave to Guitar World, that reunion seems very unlikely. In the interview Simmons said of Frehley, along with former drummer Peter Criss, “Ace and Peter have gotten three chances. They were in and out of the band — fired — three times. For drugs, alcohol, bad behavior, being unprofessional … they weren’t carrying their load.”

Simmons later in the interview said he would be willing to let the two join for a song or two while on the tour, but a full reunion was out of the question. After seeing the interview, Ace Frehley went to Facebook to give his response. In his response, Frehley claimed that he was never fired form the band, but instead quit twice on his own terms. Frehley claimed that he quit not due to drugs, but instead, “because you and Paul are control freaks, untrustworthy and were too difficult to work with!”

Along with saying these claims by Simmons has cost Frehley millions over the years, he assured that he is over 12 years sober. The most damning claim Frehley made however, was the accusation of sexual misconduct by Simmons towards Frehley’s wife. In his Facebook post, Frehley wrote, “The icing on the cake was when you groped my wife and propositioned her in Los Angeles at the Capitol Records building behind my back.”

I’m glad @ace_frehley finally spoke up. I would imagine it would get irritating hearing the same old story lines from them in an attempt to sell the current band / tour after 12 years of being sober and changing your life. Good for him speaking up!

It seems Ace Frehley has plenty of backing by the fans in this fight. One twitter user wrote, “I would imagine it would get irritating hearing the same old story lines from them in an attempt to sell the current band.” The ‘End of the Road’ tour kicks off January 31st, in Vancouver. While it seems quite apparent that a reunion of the original lineup seems unlikely, this most likely won’t be the last we hear form the two rock legends.