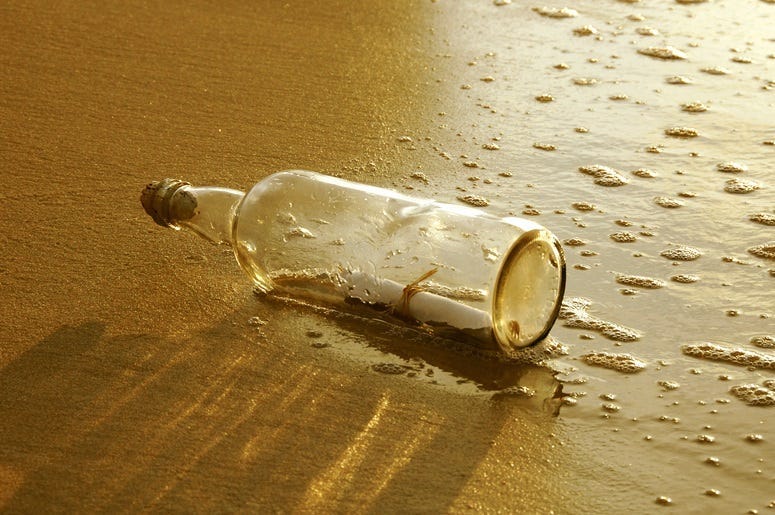 Childhood memories often fade as time seems to fly by. It is easy to forget minuscule moments from one’s youth, but when they get brought back up; the feeling of nostalgia can be overwhelming. A British woman got a blast from the past recently, when a message in a bottle she tossed into the ocean as a child was recently returned to her. After 17 years the message, though faded, somehow made it back to its original owner.

Emily Edwards, 25, sent the message to herself when she was 7. She just got it back. https://t.co/aPkzluWxuX

Emily Edwards, now 25, was visiting Wales with her family when she was seven years old. Towards the end of the trip, a young Emily decided she wanted to send a massage to her future self. She placed the message in the bottle, and tossed it into the sea, hoping to one day be reunited with her message. However, over the years, she forgot about her childhood act, until it was recently found and returned.

Just last week, Sam Hammond was running on the beach, about 60 miles from where Emily originally dropped it in the ocean. Sam was able to recognize the name Emily, and a postal code for Telford, and used social media to find the original owner of the now faded message. A picture of the message was posted on social media, and made the rounds through the internet, and eventually to Emily. In the original post it says, “Sadly water has got in but you can see the date of 28/12/01 and a name of Emily. The address is Telford with a postcode of TF1 6JZ. We would love Emily to know her bottle has been found 18 years later!!”

Emily was at first embarrassed by her past action coming back up. She says she immediately called her father to confirm this is something she did at seven on their family trip to Wales. According to Emily she, “Can’t get my head around how it hasn’t been picked up as litter or anything like that.” While it is questionable that over so many years, the bottle remained on the same beach, it ended up being a happy accident, as Emily is now happy to have her message back.

According to Emily, the blast from her past has encouraged her to make a family tradition out of it. She says she plans to follow up with the routine with her infant daughter, in hopes that her message is one day returned as well. “It’s a brilliant story to tell my little girl when she’s older and we can try doing the same when she understands a bit more and hopefully maybe hers will come back one day,” said Emily. While the news first came as a shock, it has now turned into a great story for Emily to tell for years to come.