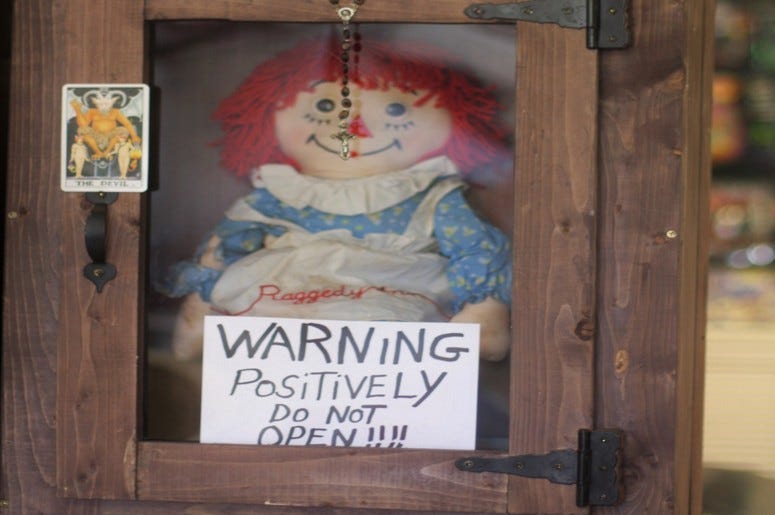 After all it is “spooky season” and what could make it freakier than encountering a real-life Annabelle Doll?  Not much. Take it from the ghost enthusiast and paranormal investigator, “Ghost Adventures” star Zac Bagans, who lived this experience firsthand with the doll.

The results were terrifying.

"When it comes to haunted objects, you think of Annabelle right away," he says in this clip from Sunday's new "E! True Hollywood Story."

In filmed footage from his time with the doll, he asks, "What do you want?" Quickly after two "anomalies" were seen on his structured light sensor camera. "You had two skeletons on you!" his assistant exclaims.

"A figure appeared out of her and then went into me," Zak explains.

The next day he explained of some abnormalities happening. "The skies turned black. They're rumbling and then boom, lightning strikes a light pole where my car is and leaves a huge gash on the light." He wonders if that would have still happened had he not encountered the doll.

Bagans goes on to tell, “I absorb and sense energies around me at a very high level. Whether it's from living people, residual energy, objects or from spirits. It's a rush, its draining, it's exhilarating, it's terrifying all-in-one depending who or what I'm in contact with."

“Something had a grip on me and I had a tremendous amount of sadness through the whole thing except one quick moment of rage near the end when Tony took her and left."

He did take the time to apologize to the doll's current owner, Tony Spera, and Lorraine.

"Touching her I feel has led to many strange events and I do believe was indeed a dangerous thing to do," he added.Too