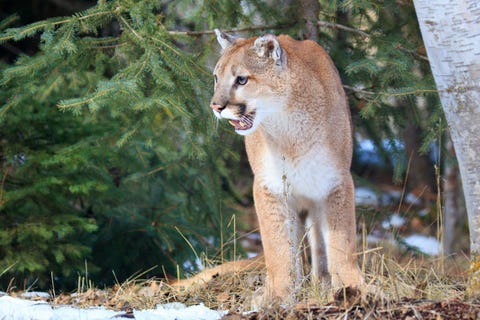 Ricky Bobby may have learned how to tame a cougar, but this guy really stepped it up a notch.

A man in Fort Collins, Colorado went out for an afternoon jog, while on the trail he encountered a very large animal. The unnamed man told officials that he had heard something behind him and that when he turned around he was attacked by a mountain lion.

The large cat lunged at the man biting him in the face and wrist. The man somehow managed to break free from the animal’s maw and killed it in the process. The runner was able to get himself to a local hospital, where he was treated for non-life threatening injuries.

Manager of the Colorado Parks and Wildlife's northeast region, Mark Leslie said in a statement that the man killed the animal out of self-defense. “The runner did everything he could to save his life. In the event of a lion attack, you need to do anything in your power to fight back just as this gentleman did."

Officials were able to locate the deceased animal on the trail, along with some of the runner's belongings. A necropsy was performed on the animal and wildlife officials were able to determine that the man suffocated the mountain lion in order to defend himself from the attack.

We may have a coyote problem right now in Frisco, but at least it’s better than a mountain lion problem.