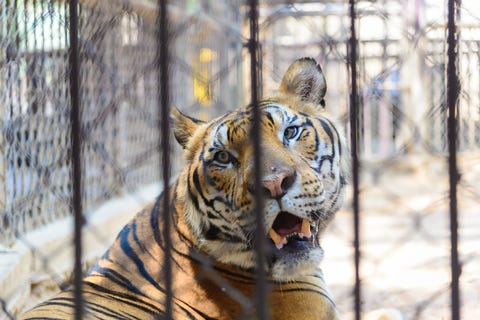 While a couple of people were up to no good, they discovered something living in their neighborhood. They took one little peek and got real scared and saw that a tiger was living inside of there.

On Monday a call was made to 311 about a tiger living inside in an abandoned home in Houston, Texas. According to officials the people that made the call broke into the vacant house to smoke pot. Upon entering the home they discovered a tiger locked up in a cage.

311 officials transferred the call to the BARC Animal Shelter who was able to receive a warrant from Houston police to search the house. Crews found the tiger in good condition, but in a horribly designed cage.

Officials say this could kind of housing for the large cat could have ended in disaster. The cage could easily have been opened, the only thing securing the tiger's enclosure was nylon straps and a screwdriver.

In order for the tiger to be moved to a secure location for the night, the Houston Police Department’s Major Offender Animal Cruelty Unit had to tranquilize the animal. On Tuesday the tiger will be moved to an undisclosed animal sanctuary.

When crews initially found the tiger they went ahead and gave him a nickname. They called the animal “Tyson”, after the 2009 comedy “The Hangover”. Seems like an appropriate name for a tiger.  Check out some of the pictures of Tyson the tiger down below.

Happy update: An animal sanctuary in Texas has agreed to take Tyson the tiger! Tyson will be transported tomorrow morning. Location is undisclosed while the investigation continues. 🐅 #khou11 pic.twitter.com/VqhA5T5w1v