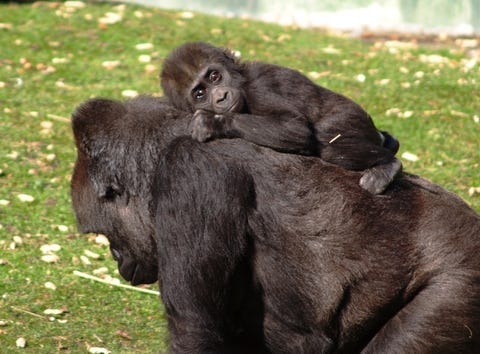 Saambili was the first baby gorilla to be born at the Dallas Zoo in 20 years; he will soon have a new friend to play with.

The Dallas Zoo just recently welcomed their second baby gorilla. That makes two baby gorillas in less than a year.

Megan, the Dallas Zoo’s 13-year-old critically endangered western lowland gorilla gave birth last week on March 7th. According to zoo officials, the two are doing well and that Megan and the baby will be making their public debut in the coming days.

Apparently, no one at the zoo has been able to determine whether Megan’s new baby is a boy or a girl. She’s been holding the infant so close to her that no one has been able to inspect the little gorilla. Once the sex of Megan’s baby has been announced the zoo will give the baby gorilla a name.

Just look at how cute that baby is, no wonder she’s not letting go.

BIG GORILLA NEWS!!: We're welcoming ANOTHER baby to our family troop! Megan, our 13 y/o gorilla, quietly delivered a healthy infant in the early morning hours on March 7. *Mom and baby are currently bonding privately behind the scenes. MORE: https://t.co/ti2468GxaL pic.twitter.com/Zy6dU3dAEs

Linda King, the Dallas Zoo's primate supervisor told the Dallas Morning News thinks Megan will be a great mom as she’s been interacting well with Saambili since he arrived last year. "This is also a big moment for mom Megan who has been extremely interested in Saambili since day one. She now has the wonderful opportunity to raise a baby of her own."

King also believes that having two baby gorillas at the same time is perfect, the two will play and grow up together. This new addition now makes 10 gorillas the Dallas Zoo is caring for.