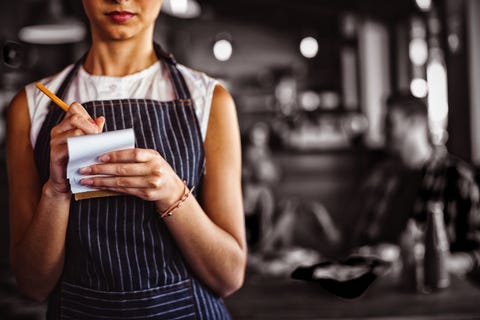 One police officer in New Jersey was feeling very generous after hearing what a waitress at a local dinner was going through.

Courtney English is 23-years-old and seven months pregnant, last Friday she was serving the lunch crowd at a local diner. Courtney had mentioned to some of the patrons about how she would be leaving soon to care for her first baby.

A police officer who recently had his first baby came in that day. He had a salad and water for lunch when he was done he paid his bill of $8.75 and left behind a $100 tip for Courtney. He even left her a small note saying, “Enjoy your first. You’ll never forget it”.

One of the cashiers pulled Courtney aside to show her the tip that the officer she was serving had left behind. Courtney immediately began crying and texted her dad about the tip, even he couldn’t believe the officers' generosity.

Courtney told the New York Post “He must have overheard my conversation with other customers when I told them that it was my first baby and that I was going out of work soon.”

Courtney’s dad was so grateful he posted a picture of the receipt along with the note the officer left for Courtney. "What a wonderful person to not only leave a VERY generous tip, but a lovely message, I don't know you Mr. Police Officer, but you made my little girl cry, and made her year. Thank you.”