Sunday saw the Jets reach a new low in 2019, and maybe even in the history of their franchise.

This season has been filled with embarrassing results for Adam Gase’s team. The Jets choked against the Bills. They lost to bad teams from Jacksonville and Cleveland, and they were demolished by the hated Patriots, but losing to the winless Miami Dolphins is a new level of embarrassment.

WFAN’s Joe Benigno said as much as he kicked off Monday’s “Joe and Evan” show with a rant for the ages. Benigno aimed most of his vitriol at Christopher Johnson and Gase, who he says should have been fired on the field immediately after the game.

“It is an absolute disgrace what we watched yesterday. Adam Gase should have been fired on the field after this game,” said Benigno. “Because not only did they lose in just brutal fashion to a team that’s trying to lose every game they play, but he quit on his team yesterday too. This coach yesterday quit on his football team … They’re down 11 points with three minutes and thirty seconds to go, they’re getting the ball back, and this guy just let the clock run. He let it run, he let it run, he let it run all the way down, and he never used a timeout until there were seven seconds left, Miami had the ball taking a knee, and the game was over. So, this coach, who should have never been hired in the first place, and I don’t know how Christopher Johnson can look at himself in the mirror today that he hired this absolute disgrace. And we thought Todd Bowles was bad? And we thought Richie Kotite was bad? This may be the worst coach in the history of the franchise. He should go now.”

Gase was hired in January with the hope that he would be able to develop Sam Darnold and turn the Jets around following a few mediocre seasons under Todd Bowles. That hasn’t happened. Instead, as Benigno pointed out, Darnold appears to be regressing.

“The quarterback is playing so badly that you’re starting to say ‘ boy, looks like we’re going to get the first pick in the draft, maybe we have to draft a quarterback again.’ That’s how bad this guy is regressing, and it’s all because of Adam Gase.

Gase earned a reputation as a bit of quarterback guru after his time spent working with Peyton Manning, but that reputation hasn’t been backed up with the Dolphins or with the Jets. 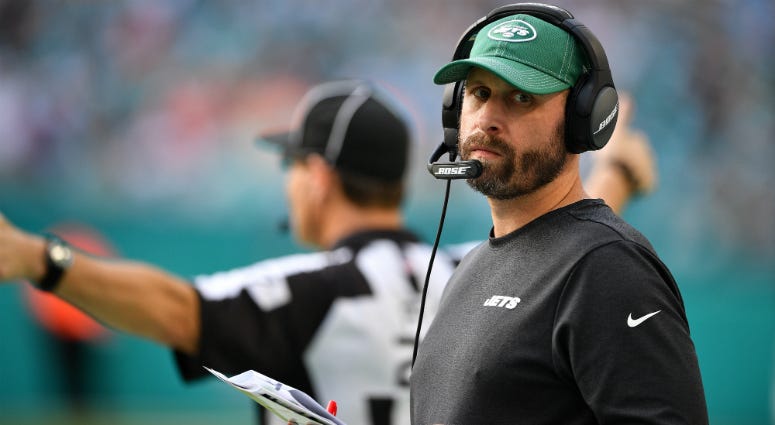 Johnson hired Gase, and Benigno repeatedly noted that the team’s owner also deserves a lot of the criticism for appointing such a bad coach and for continuously overseeing such an inept franchise.

“But the real culprit here is Christopher Johnson, who is over his head as an owner, has no clue how to own a football team … how he allowed Adam Gase to sell him a bill of goods, or to whoever he listened to … whoever else was singing Gase’s praises. And he wound up giving this guy not only the head coaching job, but complete control of the franchise? Christopher Johnson … how can you go face the Jet fans with the disgrace that your franchise is right now?”

At 1-7, the Jets season is essentially over. It would take a miracle for them to reach the playoffs, and it’s safe to say that miracle is not coming.

Evan Roberts pushed back on the notion that a coach can’t be fired in the middle of his first season. He also thinks Gase should be fired as soon as possible, and that he won’t find another head coaching job in the NFL after this disaster.

“’You can’t fire a coach in the middle of his first season’ … if you watched this guy coach with this football team this year, and the three years with Miami, you know what should have been obvious back in January. He’s not a good football coach … This is the definition of Adam Gase. He makes bad situations worse. He can get off to a hell of a start, he’s got a great game plan. It’s probably how he conned Christopher Johnson into this job to begin with. It all sounds great on paper … once there’s any bit of adversity … he crawls into his little hole and quits.”

“Adam Gase will never coach as an NFL head coach ever again once the Jets make the right call and just get rid of him. Cut your losses! You screwed up!”

Click on the audio player above to listen to the full open from Monday’s show with Joe and Evan.