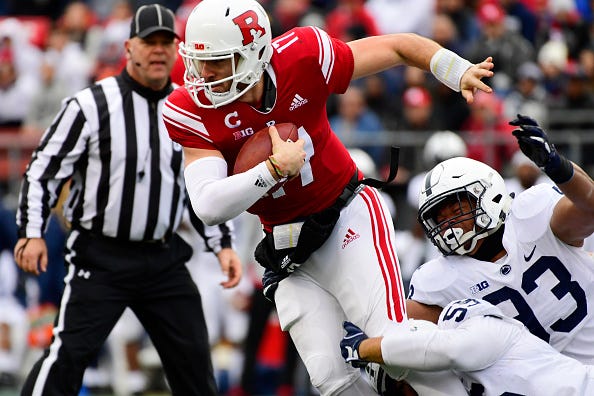 On top of that, the Golden Nugget Las Vegas’ sportsbook recently released its college football win totals —with the season less than three months away.

But as an avid college basketball bettor, along with college football to a degree, New Jersey’s prohibition on wagering on local colleges limits fellow gamblers. A select amount of the states in the process of legalizing sports betting have instituted it into their respective bills, too.

For instance, I wouldn’t be able to invest in Rutgers football’s regular season opener (-11.5 vs. UMass) or a Seton Hall men’s basketball national title futures bet (75-1) if I was a New Jersey resident.

I chatted with sports betting legal analyst Daniel Wallach to dig further into the issue.

Where did the ban on betting on local college teams —among the states with legalized sports betting already and those with it on the way —stem from?

At the time, it was considered a political compromise to ensure the passage of the voter referendum. Without a successful voter referendum, there wouldn't have been an opportunity to legalize sports betting, which ultimately led to the Supreme Court's decision.

What have been the aftereffects of the voter referendum, particularly in New Jersey?

DW: New Jersey lawmakers must be kicking themselves now. They have buyer's remorse over the fact that they have included an in-state college prohibition because all that action is now going over to Pennsylvania, Delaware, West Virginia, as well as to the black market (offshore sites). If you gave New Jersey lawmakers truth serum today, they would probably express regrets over having that language included in the voter referendum.

They didn’t need it, as the measure passed by nearly a 2-1 margin, and there’s nothing they can do about it now — save for another voter referendum to undo the ban. That’s the only way to change it because it’s now a part of the state constitution. But that’s not going to happen as a stand-alone measure, so they’re stuck with it for now.

How does the prohibition on college football and college basketball betting differ from states that didn't include the voter referendum?

DW: In Mississippi, where there’s no ban, a significant amount of wagering takes place on college football games, especially on Alabama, Ole Miss, Mississippi State and LSU. Mississippians aren't betting on college basketball games nearly to the same degree that they're doing for college football. And, remember, there are no in-state professional teams, unless you count the New Orleans Saints.

If you banned in-state college betting in Mississippi, it would greatly affect the bottom line. Just imagine if you couldn’t bet on the Ole Miss or Mississippi State games? You might as well just fold up the tent. In the SEC states, particularly those that don't have major professional sports teams playing in the state, I think you're gonna find college football betting is the king. The introduction of mobile betting in Mississippi would easily more than triple the existing market.

In states that are more basketball-centric, such as Pennsylvania, where you have a long history of basketball passion —both on the professional and collegiate level —and all the historic schools, like Villanova, Temple and Penn. The enthusiasm for college basketball outweighs football. It's

going to vary based on the market. By in large, there's greater interest in college football. But on the other hand, there are so many more college basketball games being played on an annual basis. The season lasts much longer, and games are played every day, as opposed to college football, which is basically weekends.

How big of a long-term win is it that the NCAA ended its ban on events in states with legalized sports betting?

DW: It's a cosmetic — albeit, symbolic — change. It doesn't signal a seismic shift in the NCAA's position on sports betting because the bottom line here is that college athletes fall into two risk factors. They're in an age group (18-22) that is probably at the highest risk of gambling addiction. And number two, players for the big-time collegiate programs aren't compensated certainly not like the schools themselves are.

Getting your room, board and tuition and the cost of attendance paid pales in comparison to what athletes in the major professional sports make. As long as college athletes are treated as indentured servants —and aren't paid for the revenue that they generate —the NCAA will remain reluctant to truly embrace legal sports betting, other than to ensure that they participate in the integrity monitoring aspect of it.

But athletic directors of a number of colleges have made pitches for integrity-related fees paid to the colleges, based upon the investigative and monitoring burden that expanded sports wagering imposes upon a number of schools. While the NCAA may take one particular position globally while not committing to embracing sports betting, a number of schools individually may take different views.

In Illinois, which just passed a sports betting bill, the owners of the college sports facilities can get wagering licenses. Ironically, you may see college presidents and chief financial officers looking to have their school participate in the opportunity. But the NCAA will likely not let them.