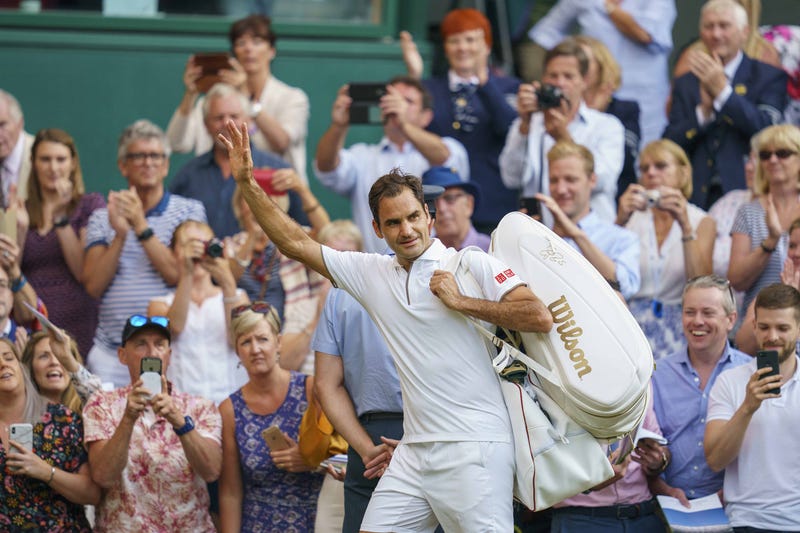 (CBS Sports Radio) - As I watched Roger Federer glide around Wimbledon’s center court on Sunday, hitting one winner after another, digging deep when he fell behind and pushing Novak Djokovic, another truly great player, to the brink, I had a thought, "if he wins, he should retire on the spot." Accept the trophy, wave to the crowd and then grab Sue Barker’s BBC microphone, drop it to the grass and walk off to wild cheers.

That wasn’t going to happen, and I knew it. Even three weeks shy of 38, Federer is still near the top of his game as he emphatically proved last weekend by beating Rafael Nadal in the Wimbledon semifinals and then coming within match point of beating Djokovic in the final.

Athletes who walk away in triumph are extremely rare: Jim Brown quit the Cleveland Browns after nine seasons while he was still the best running back in the NFL; Bill Russell retired from the Boston Celtics soon after winning an 11th NBA title in a remarkable 13-season career; John Elway walked away from the Denver Broncos after winning back-to-back Super Bowls; Ted Williams homered in his last at-bat in Fenway Park and Pete Sampras knocked off arch-rival Andre Agassi in the 2002 U.S. Open final and said so-long to tennis.

In coaching, Vince Lombardi retired after winning Super Bowl II with the Packers. But he came back two years later to coach in Washington. John Wooden retired in 1975 after winning his 10th NCAA title in 12 years at UCLA. Unlike many coaches who retired and came back—Bill Parcells must have done it a dozen times—Wooden stayed retired.

I’m sure there are other examples. Michael Jordan retired twice after winning championships in Chicago but came back a third time to play in Washington for two seasons. He wasn’t so much a shadow of himself as two of himself. For a mere mortal, Jordan didn’t play badly, but he’s not a mere mortal. Sandy Koufax was 27-9 with a 1.73 ERA in 1966 and retired at the end of that season. But it was an arthritic condition in his elbow, not his desire to drop the mic (a term that didn’t exist then), that forced him out of the game.

I’m sure there are others, but not many. The list of those who lingered too long is much longer: Willie Mays playing for the Mets; Johnny Unitas for the Chargers; Joe Namath for the Rams; Wayne Gretzky in a Rangers uniform; Kareem Abdul-Jabbar hanging on because his agent had lost most of his money; Gordie Howe in Hartford—although he played remarkably well for a man over 50. The list goes on.

It was Tom Kite who explained to me why most athletes play too long rather than ending their careers too soon. “When you win your last tournament, it never occurs to you that you’ve just won for the last time,” he said to me in 1994. “You’re playing great at that moment. Walking away would never occur to you. You know it’s just a matter of time before you win again.”

Kite won the U.S. Open in June of 1992 at the age of 42. Then, in February of 1993, he won twice in three weeks on tour. Why should he have thought at that moment that he wouldn’t win again until after turning 50 and joining the Senior Tour?

I have always maintained that an athlete’s legacy belongs to him—or her. If Jim Palmer wanted to try a comeback five years after retiring from the Orioles, he had an absolute right to do so. The same was true of Jordan in Washington. If Alex Smith wants to try to play again after suffering the horrific injury he suffered while playing for Washington last fall, that’s his right. His chances of being anything close to the very good quarterback he was before the injury aren’t great. But it is his body, his mind and his legacy.

In 2012, while I was covering the U.S. Open at the Olympic Club, I was introduced to Willie Mays, who the U.S. Golf Association had invited to the championship as a special guest. I rarely get nervous meeting celebrities of any kind, but Mays had been a boyhood hero—even when he played in San Francisco.

I remembered his two seasons with the Mets at the end and the infamous specter of him stumbling around in centerfield during the 1973 World Series, but I knew how great he had been.

I told him he’d been a hero of mine as a kid-something he had probably only heard about a million times. He smiled.

“Mets or Yankees?” he asked, realizing I was too young to remember when the Giants played in the Polo Grounds.

“Mets,” I said. “I was absolutely thrilled when you came and played for them.”

He shook his head. “I never should have played for the Mets,” he said. “I was done by then. I should have just walked away in San Francisco.”

At that moment, he had the perspective of looking back 40 years and understanding what he had been for so long and what he’d become at the end.

The tough thing for great athletes—and to me, anyone who plays at the highest level of a sport is a great athlete—is accepting the notion that the “slump” they’re in isn’t just a slump. Most of the time, they believe they’re going to come out of it and become great again.

Often, they don’t. There’s an old saying among athletes that you don’t retire from the game, the game retires from you.

The fact that Federer can still play at this level as he prepares to turn 38 is almost miraculous. The same is true of Serena Williams, who will be 38 in September and is a mother, and yet has played in three major singles finals since returning to tennis after the birth of her daughter.

Nowadays, the reasons athletes hang on as long as they can, have changed since Mays was a Met. Certainly, money is part of it. Sure, the great ones have made millions, but it is hard to walk away from continuing to be paid millions.

One thing that hasn’t changed is the feeling they all get from being stars—heroes. Peter Boulware, who played for the Baltimore Ravens for nine years, was one of the brighter athletes I’ve ever encountered. He had a very clear idea of what life was going to be like when he was no longer a football player.

“I own a string of car dealerships in Florida,” he said to me one day in 2004. “I’ve made a lot of money. I’ve got no financial worries. I’ve taken care of the money I’ve made playing football.”

He stopped there for a moment, thinking.

“It’s who I’ve been for most of my life—a football player who lives for those cheers and those roars. That will be tough to walk away from.”

Mike Flynn was an offensive lineman on that 2004 Ravens team. When the Ravens were introduced, they walked out of a backdoor from the locker room, turned left and walked down to the home team tunnel. Those not in uniform—injured or not active—would walk up the steps at midfield to the sidelines to await their teammates.

Flynn had been injured for several weeks but was back in uniform one day in October. I walked down the hall with him to the tunnel that day and he said to me, “You know, you walk out the locker room door and up the steps to the sideline, you’re just a guy. You run out of this tunnel, you feel like a God.”

More than anything, athletes miss THAT—the adoration, the attention and, in team sports, being part of a team. Nolan Ryan once told me the thing he’d miss most was putting on a uniform, knowing his teammates were counting on him. Mike Mussina put it another way: “I’m going to hate walking into a clubhouse,” he said, “and not having a locker anymore.”

I wonder how it will end for Tom Brady. He turns 42 early next month and won his sixth Super Bowl in February at 41, still playing brilliantly.

Just like Federer, he’s already defied time, playing at such a high level for so long. But time always wins in the end. Brady has said he wants to play until he’s 45. The question is can he play WELL until he’s 45.

What if he wants to keep playing when Bill Belichick doesn’t think he’s got it anymore? Belichick isn’t exactly a sentimentalist. Could Brady end up like Unitas, Namath or Joe Montana—finishing a brilliant career in another uniform?

If you love sports, you hope that doesn’t happen. You hope Federer and Williams have one more Grand Slam victory in them. You also hope they know when to drop the mic.

But you also understand, the mic is theirs—and should be theirs—for as long as they want it.

John Feinstein’s most recent book is, “The Prodigy,” the story of a 17-year-old who has a chance to win the Masters, but has to deal with overzealous agents, equipment reps and his own father—all of whom want to turn him into a human ATM machine. His next novel for young readers, “Benchwarmers,” is due out late next month. His most recent non-fiction work, “Quarterback—Inside the Most Important Position in Professional Sports,” will be out in paperback in September.