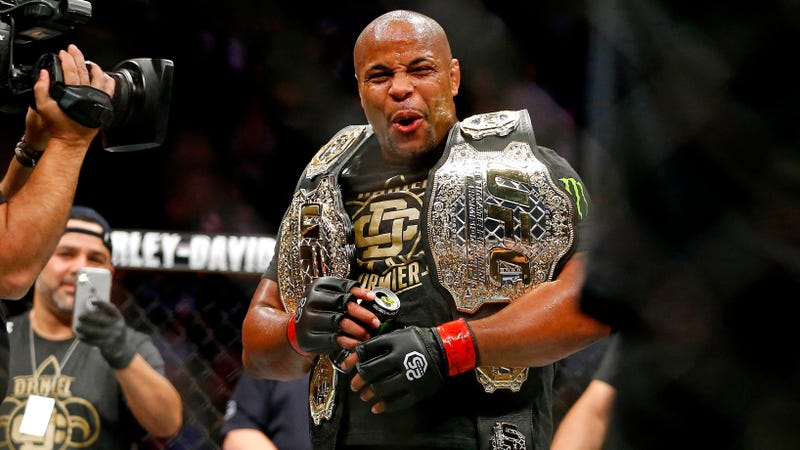 Name a better combat sports champion, inside and outside the ring or cage, than UFC champion Daniel “DC” Cormier.

Time’s up. You can’t. The UFC multi-division champ and former Olympian can do it all, as an athlete and role model. Cormier paves a new path for MMA superstars every time he’s in front or behind the camera.

Olympian: Before Cormier was throwing leather in a cage, he was representing the United States in freestyle wrestling at the 2004 Olympic Games in Athens. Cormier came up just short of a medal, finishing in fourth place. But he gained a solid foundation for the next step of his career. The Louisiana native also continues to share his wrestling knowledge with high schools teams across the country and teaches a youth wrestling team out of his home gym in San Jose.

Champion: Cormier ran through the MMA heavyweight competition in Strikeforce, going 11-0 on the strength of his elite wrestling skills. When Strikeforce folded, Dana White scooped up the top free agents for UFC. Cormier was part of the UFC’s huge acquisition, but was faced with a tough decision: His close friend and teammate, former UFC heavyweight champion Cain Velasquez, was still navigating his way back to the belt. So what did Cormier do? He cut 50 pounds down to the light heavyweight division (205 pounds) to begin his quest to become a UFC champion.

Bitter rival: Cormier is 7-1 (one no-contest) in the light heavyweight division. He has beaten every man not named Jon Jones he has faced inside the cage. Cormier’s loss came against Jones in January 2015, via unanimous decision. The no-contest bout also came against Jones, at UFC 214 in July 2017: Jones’ knockout win was overturned after he tested positive for performance-enhancing drugs. Jones’ talent as a fighter is undeniable, but he has a history of drug use (recreational and performance-enhancing) and legal issues. Cormier has never tested positive and continues to prove his loss(es) to Jones won’t define his place in MMA history. He moved back up to heavyweight at UFC 226 in July and knocked out Stipe Miocic in the first round, becoming the second two-division champion (he later relinquished the light heavyweight title, holding onto the heavyweight strap).

Broadcaster: Cormier has gained another wave of MMA fans with his work on the broadcast desk during televised UFC cards and pay-per-view events. Cormier is a wizard as an analyst — intricately breaking down fights, sometimes just days after being in the heat of battle himself — and color commentator alongside the intense Joe Rogan. Cormier’s on-air honesty and sharp humor make him an asset for UFC on the microphone. Expect Cormier to be a big part of UFC’s broadcast team long after he hangs up the gloves.

Final showdown: Cormier has stated over and over that he will not fight past his 40th birthday in March 2019 (most likely UFC 235), and has said in multiple interviews he only wants Brock Lesnar next — which would be a hell of a way to close out his career. But nothing is ever a sure thing in combat sports. Fighting Lesnar could generate more than two million pay-per-view buys, but Lesnar could get injured or again test positive for steroids before the bout. So Cormier is leaving the door cracked for a third Jones fight.

Opponents change and retirement plans quickly get interrupted. Until Cormier finally calls it quits, let’s celebrate a champion with a positive impact in the age of dolly-throwing maniacs.

Follow Isaac Feldman, Pete Hoffman, and Outside the Cage on Twitter for all your MMA and UFC coverage, and listen to their" Outside The Cage" podcast.