Listen to BIG 98.1 on Audacy for your chance to win Bryan Adams tickets!
By Joe Giglio

Think about what we just watched. Think about what we’ve been watching all season. Take a minute to look at the stats. Fire up the highlights (they aren’t hard to find). Scroll to the top of the NFL standings.

We’re not just watching Jalen Hurts’ breakout season. That was established in September.

We’re not just watching Hurts take the Josh Allen-leap to stardom in his third season. That was established in October.

We’re not just watching a player stack MVP-esque performances and will his team to victory with a game-winning drive. That was established on the road in Indianapolis. 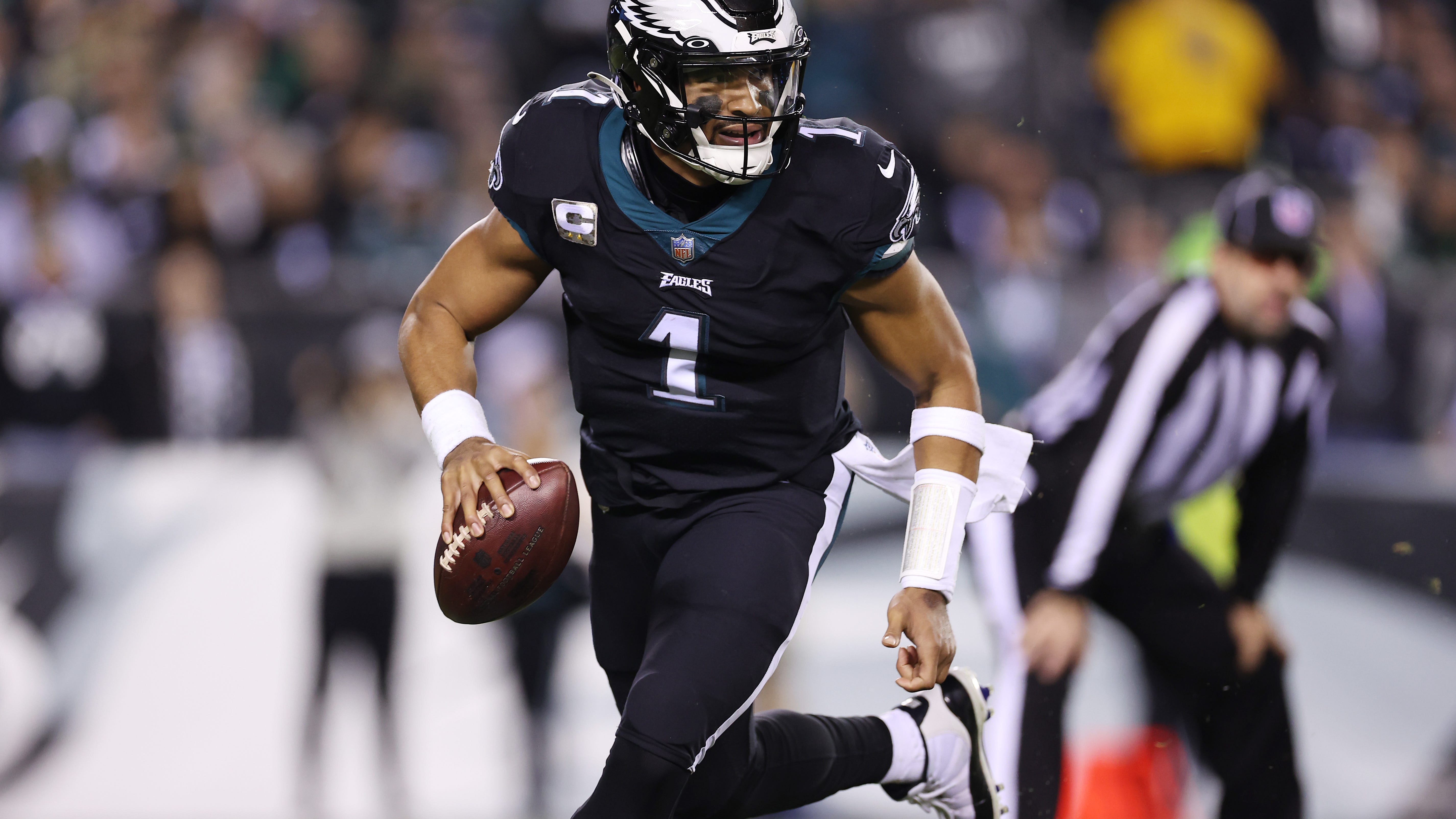 I know what you’re going to say: It’s too early. He has to stack more seasons. He needs to win more and in the postseason. And to that, yes. Obviously. The book isn’t fully written. But the early chapters of every great book begin to tell the tale of what’s to come. Special stories rarely develop halfway through the narrative. It’s not atypical to have an idea of excellence and something extraordinary early on.

We have now arrived there with this quarterback.

Hurts isn’t just excelling; he’s putting together arguably the best season any Eagles player (forget just quarterback) has ever had. With Week 12 in the books, here’s what Hurts is on pace to accomplish this season:

No quarterback in Eagles history has played more than 11 games in a season with a higher completion percentage or passer rating. Hurts is on pace to break the franchise’s single-season touchdown mark. Hurts could shatter Randall Cunnigham’s 4,402 total yards mark from 1990.

All of this, of course, is happening with minimal turnovers. If Hurts can reach 40 touchdowns with less than 10 interceptions (a very plausible outcome), he’ll join Tom Brady, Aaron Rodgers and Lamar Jackson as the only quarterbacks in NFL history to score that much while turning the ball over so infrequently in a season. This is rare quarterback play, punctuated by one of the best dual-threat performances (first player since 1950 with at least 150+ rush yards, 150+ pass yards and multiple passing touchdowns in the same game) we’ve ever seen on Sunday night vs. the Packers.

Then, of course, there’s the winning.

Hurts’ Eagles are 10-1. In his last 14 regular season starts, the Eagles are 12-2. Hurts is now 19-11 as a starter with the Eagles, and 18-8 alongside Nick Sirianni. This may be the best Eagles roster Hurts has a chance to play with during his time in midnight green, but expecting the winning to stop is foolish. Hurts is the central figure of a well-structured organization, and very likely to be this team’s starter for years to come. 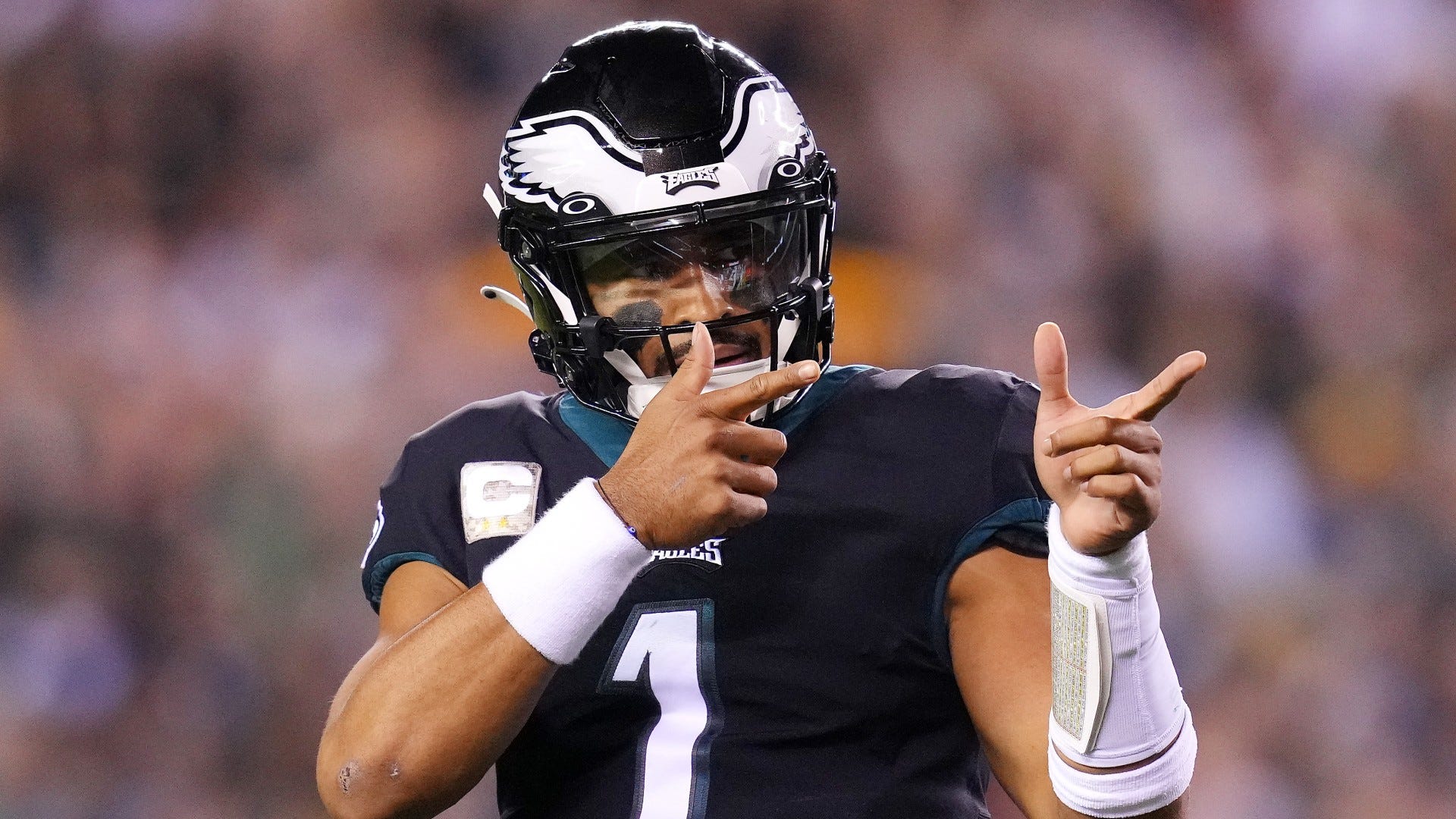 Let’s say the Eagles and Hurts agree to a five-year contract extension when the new league year opens in March. That would give Hurts six more years in an Eagles uniform. If he ends this season with, say, 23 career wins (four wins in the final six weeks), Hurts would be 70 wins away from Donovan McNabb’s franchise victory record of 93. Averaging 10 wins per season in his prime would put Hurts in striking distance of the most wins in franchise history.

I’m well aware rings define (and will continue to define) this conversation more than anything else. But here’s the truth: The Eagles franchise has never had an all-time great quarterback. The only guy to deliver a ring was Nick Foles, a player as clutch as anyone we’ve ever seen in Philadelphia but far from an all-time great. If we’re ranking the best combination of talent, longevity and winning, it’s McNabb. But we all know McNabb was missing a special ingredient that Hurts seems to have. Call it leadership. Call it a championship mentality. Call it the “it” factor. Call it whatever you want. Foles is my No. 1 guy, if I need to win one game. Vick had the most talent, but the peak was so short. Cunningham was outstanding, but not built to last.

Hurts is like a hybrid of all of them, from the athleticism of the greats to the leadership and it factor of Foles. Plus, taking the field as a starter at the age of 22 gave him a head start when it comes to overall counting stats and a chance to stack career wins.

We’ll see how the playoffs (both now and in the future) play out, but it’s OK to say the truth as we watch Hurts ascend from question mark to MVP candidate to the Eagles long-term starter: We are watching the best quarterback in Eagles history.

We strive to be a platform where varying opinions may be voiced and heard. The views, thoughts, and opinions expressed by the author(s) of this article and/or by those providing comments are theirs alone, and do not represent those of Audacy, Inc. We are not responsible for any damages or losses arising from this article and/or any comment(s).
Featured Image Photo Credit: Mitchell Leff/Getty Images