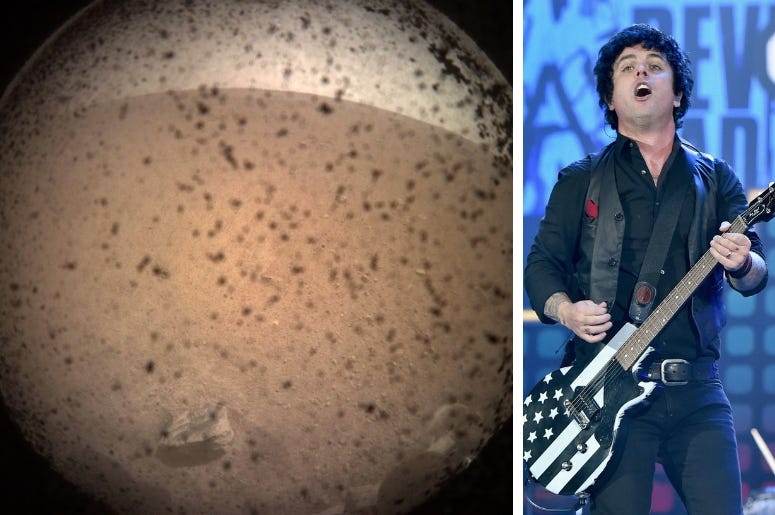 NASA made history when it landed a spacecraft on Mars on Monday, and a certain rock band from Northern California was along for the ride – in a way.

After the InSight mission touched down on the red planet, Green Day revealed its connection to the moment. It turns out that “Green Day Since 1986” was etched on a chip that was part of the lander.

The band tweeted a picture to prove it, and a clever commenter congratulated them for beating fellow rockers Thirty Seconds to Mars to the punch.

Officially landed on Mars 🚀🤘👽 "Green Day Since 1986" was etched on a chip on the @NASAInSight Mars Lander that landed at Elysium Planitia today. Out of this world. pic.twitter.com/WwNEKh4nxE

The successful mission was a major source of pride for all of those involved. Video from NASA’s Jet Propulsion Laboratory in Pasadena, California shows the men and women inside mission control unable to contain their excitement as touch-down approached, and once the unit landed it was total jubilation.

A pair of satellites trailed InSight throughout the six-month, 300-million-mile journey and helped send back pictures just minutes later. The spacecraft is designed to drill into Mars’ interior. More than half of previous missions to Mars had failed.

Aaah...soaking up the Sun with my solar panels. 🌞 After a long flight, and thrilling #MarsLanding, it feels great to get a good stretch and recharge my batteries. (Like, literally.) It’s just what I’ll need to really start getting in tune with #Mars. https://t.co/yse3VEst3G pic.twitter.com/LpsiI0KNNz