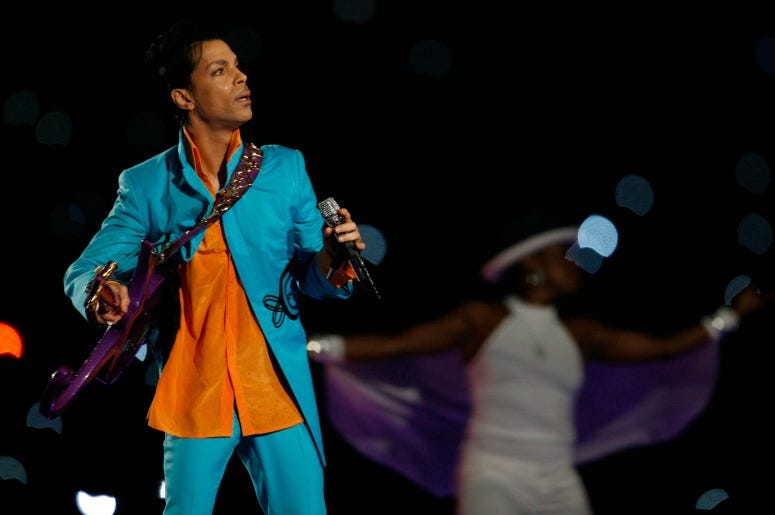 This week we've got our first peek inside the vault of one of music's most iconic performers, another shredding sampler from a legendary guitarist, and a new album from the "world's greatest boyband." Plus a big voice is back with his eighth offering, and another band turns their sound upside down. These are the highlights from this week's New Music Friday.

Through the slight hiss of the tape, Prince begins riffing away behind the piano. The studio version of "17 Days" would eventually start with an elastic bassline and sparkling snyths, but on this early version it's a strutting, confident pound of the keys. Here we find the icon playing with the foundation of one of his most famous B-sides. It's the first of nine songs featured on Piano & A Microphone 1983, the first release from the treasure trove on Prince's vault. At the time of its recording, the artist was still writing his legend. Somewhere between the release of 1999 and Purple Rain, Prince sits behind the piano in his home studio, noodling away on an early version of "Purple Rain". The session also finds Prince playing with the spiritual "Mary Don't You Weep", and the unreleased "Why The Butterflies". This is a coveted collection for the most die-hard fans of The Purple One, and at the very least an intimate glimpse into the process of one of music's most amazing artists. - Michael Cerio

Slash featuring Myles Kennedy and The Conspirators - Living The Dream

Slash has been touring almost non-stop with Guns N’ Roses since the band hit the road in 2016, but he still found time to make another album. Living the Dream is the third billed to Slash featuring Myles Kennedy and the Conspirators, and like every other project Slash has been involved with, this effort can’t help but have a hint of GNR in it. “My Antidote” opens with thunderous drums and features a classic up-and-down the neck Slash solo. The highlight might be “Mind Your Manners,” carried by a driving blues riff. And speaking of riffs, don’t miss the one that kicks off the aggressive “Driving Rain.” As for the album title, Slash told Radio.com in an exclusive interview “It was really just a joke about the current state of global politics. Living The Dream was sort of a sarcastic, snide little rip at that.” - Bob Diehl

BROCKHAMPTON has been dominating the streaming era, taking over without a label and dropping four albums within the span of about a year. The accurately self-proclaimed “best boy band since One Direction” delivers a true hip-hop feel with alternative elements, and rap about everything from how much they hate capitalism to their sexualities. iridescence is no different and stands as part one of their the best years of our lives album trilogy. - Tiana Timmerberg

While it may not have felt like it, it had been five years since we’ve heard new music from singer, songwriter, and part-time actor Josh Groban. His eighth studio album, Bridges - a soulful collection of covers, originals, and can’t miss duets - is out now and already getting a lot of buzz. To mark the album’s release, Groban appeared on Live with Kelly & Ryan and performed “99 Years” with Sugarland’s Jennifer Nettles. The pairing follows the album’s other duets with Sarah McLachlan on “Run” and Andrea Bocelli on “We Will Meet Once Again.” - Kyle McCann

The Band Perry released a brand new EP today (September 21) titled Coordinates. The five new songs we entirely written and produced by members Kimberly, Neil, and Reid Perry. The trio has stepped away from their country roots, and the new tunes bring fans more of a pop and electronic vibe. Coordinates is the first project to be released since The Band Perry’s 2013 album, Pioneer. Kimberly revealed to Billboard that their “mission is to release our music hot off the press” while continuing to work in the studio. No matter what their style is, The Band Perry promises to be exactly who they are. - Lauren Hoffman

Also out this week is new music from St. Lucia, Billy Gibbons of ZZ Top, and Christine and the Queens.