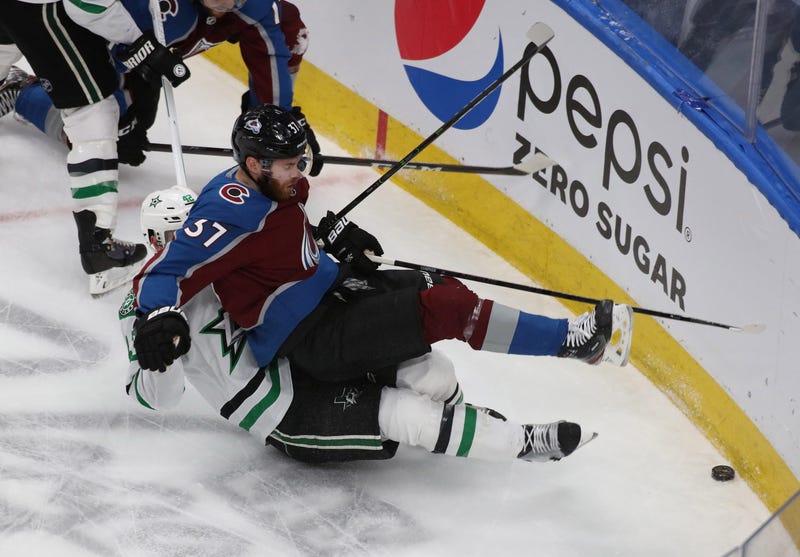 The Colorado Avalanche made short work of Arizona in their first-round playoff series, dispatching the Coyotes in five games. In fact, the Avalanche won each of the last two games of that series, 7-1.

Things haven’t gone as smoothly in the second round against Dallas. The Avalanche lost Game 1, 5-3, on Saturday, and they lost Game 2, 5-2, on Monday.

How have the Stars made life difficult on Colorado?

“The Avalanche, their offense is based on speed, offense off the rush, and Dallas, they’re a very good physical team,” Avalanche play-by-play voice Conor McGahey said on After Hours with Amy Lawrence. “They don’t allow you a lot of passing lanes. They block a lot of shots – 21 in Game 1, north of 25 blocked shots in Game 2. So they swallow you up at any part of the ice that you’re trying to make some hay through with speed. That’s the neutral zone, that’s trying to cycle down low – and the Avalanche get plenty of chances. When they got good chances, when they broke through Dallas’ defense, they ran into Anton Khudobin, who was masterful.”

Khudobin stopped 39 of 41 shots Monday and has led the Stars to five straight wins.

“It’s not like the Avalanche were [unable] to get through Dallas as much as they would like,” McGahey said. “They ran into a hot goaltender as well. They really do swallow it up. The Avalanche are really meant to get on their horse and soar through center ice and play off the speed of guys like Cale Makar, Nathan MacKinnon and Andre Burakovsky and more, and Dallas just doesn’t give you the real estate that you need to make that happen.”

It seems the Avalanche could sure use Matt Calvert right about now. The 30-year-old winger is yet to play in the series due to an undisclosed injury.

“Matt Calvert has played in the postseason with the Columbus Blue Jackets, and he was a great pickup for the Colorado Avalanche two seasons ago,” McGahey said. “The fourth line when he’s healthy – of him, Pierre-Edouard Bellemare and Matt Nieto – has been one of, if not the best, fourth line in the NHL the past year. When [Calvert] is not in the lineup, the Avalanche are 1-5 in the postseason; when he is in the lineup, the Avalanche are 12-4. It’s a guy like that who speaks not only with words but with shifts and actions. He does not back down to anybody – size, talent, it doesn’t matter. He doesn’t really back down. Him not being in the lineup does not help the Avalanche. . . . My hope is that Matt Calvert draws back into the lineup.”