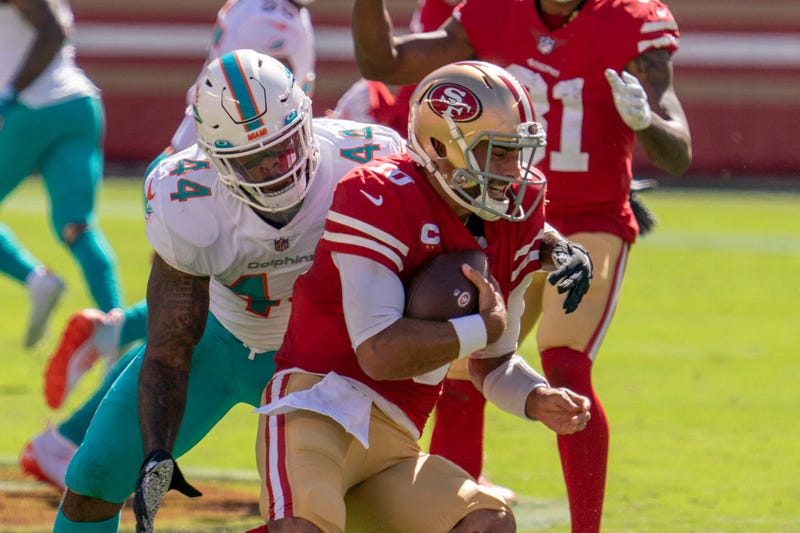 In February, the San Francisco 49ers came within a couple of plays of winning the Super Bowl. Now they are 2-3 and last in the NFC West.

Is it possible that this team could miss the playoffs?

“I could see them missing the playoffs if these guys are playing,” former Niners All-Pro and Super Bowl champion Eric Davis said on The Zach Gelb Show. “It’s about health. Is this a playoff team? The way they are currently constructed with the guys that are playing right now, no, they are not. They’re not even a good football team right now.”

The 49ers are without several defensive stalwarts, including Nick Bosa and Solomon Thomas, who are out for the season. That is one of many reasons why the Niners fell to the Miami Dolphins, 43-17, in Week 5.

“You got to realize they had guys playing Sunday on the field, starting in an NFL football game, that would not be on a roster – would not be in uniform for anyone – if not for the injuries they’ve had,” Davis said. “You can’t just come off of your couch and go out there and play in a football game, and that’s what they’ve really been putting out there lately. So this is not a playoff football team as constructed right now. Let’s see if they can get healthier.”

And, in some cases, better. Jimmy Garoppolo was benched after a dreadful first half against Miami. He finished 7-of-17 for 77 yards, two interceptions and three sacks.

If Garoppolo does not improve, might the Niners move on from him?

“If anyone doesn’t play well, there’s the potential to move on,” Davis said. “If the quarterback plays well and you’re losing games, it’s not necessarily the quarterback’s fault. The quarterback doesn’t play defense. . . . It’s going to be very difficult to get John Lynch and Kyle Shanahan – both hand-selected this guy – to say that we were wrong. It depends on how Jimmy plays more so than what the record is.”

Zach Gelb doesn’t think the Niners would pull the plug on Garoppolo after one bad season and that he will be back in 2021 no matter what happens in 2020.

“I would think he’s back because I don’t think he’s going to perform poorly,” he said. “I saw him do things last year that Shanahan wants done in this offense, and the pieces he’s brought in to work with that, Jimmy can get the ball out in rhythm. He can get it out on time. Jimmy’s problems come when he needs to be more patient and wait for more things to develop and when he has to create things, when he has to make the Russell Wilson play. He’s not athletic like that. He truly is a clone of Tom Brady. That was the old guard at the quarterback position. Defensive players have gotten too fast. Jimmy is a pocket passer. So I disagree with you on that. If he doesn’t perform well, they will look for another quarterback.”