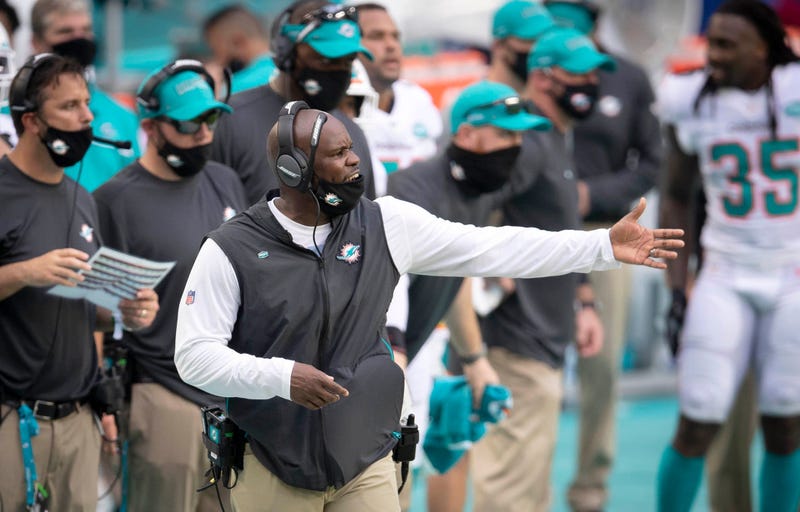 The Miami Dolphins (8-5) host the New England Patriots (6-7) on Sunday, and they will do with supreme confidence. Sure, the Dolphins are coming off a 33-27 loss to the Kansas City Chiefs (12-1), but they have won seven of their last nine games.

Miami, which has missed the playoffs in 16 of the last 18 seasons, is currently a playoff team: the 7-seed in the AFC.

How has Brian Flores turned this franchise around?

“Brian Flores has done an incredible job of taking this team, instituting a culture, and getting the right people in place,” NFL on CBS broadcaster Ian Eagle said on The DA Show. “They’ve really made a concerted effort to find the people that fit what they want to do, that have bought in. It’s a nice mix of youngsters and veterans. There’s a little bit of New England flavor in there, but not too much, not overwhelmingly. Obviously their fate rests in the left arm of Tua down the road. This is how it’s going to be. These are the seeds that are being planted. Tua is really talented, still young, and they believe they’ve got a young QB that they can grow with. This would be tremendous for them to make the playoffs and use this as a building block.”

The Dolphins lost their season-opener to New England, 21-11, and looked completely anemic offensively. Miami, however, is 8-4 since then while the Patriots are 5-7.

What changed for the Dolphins? And when?

“With Miami, there’s more confidence,” Eagle said. “They went on a West Coast trip to play the 49ers [in Week 5], and in talking to the Dolphins players, that appeared to be a big turning point for their team bonding.”

“They finally got out from the controlled environment and had time together in the hotel – flew in on Friday, hung together on Saturday, played the game on Sunday,” Eagle said. “And from that point on, there seemed to be this feeling that they had enough in that locker room to go out and be an impact team this year.”

Sunday’s kickoff against New England is slated for 1 p.m. ET.