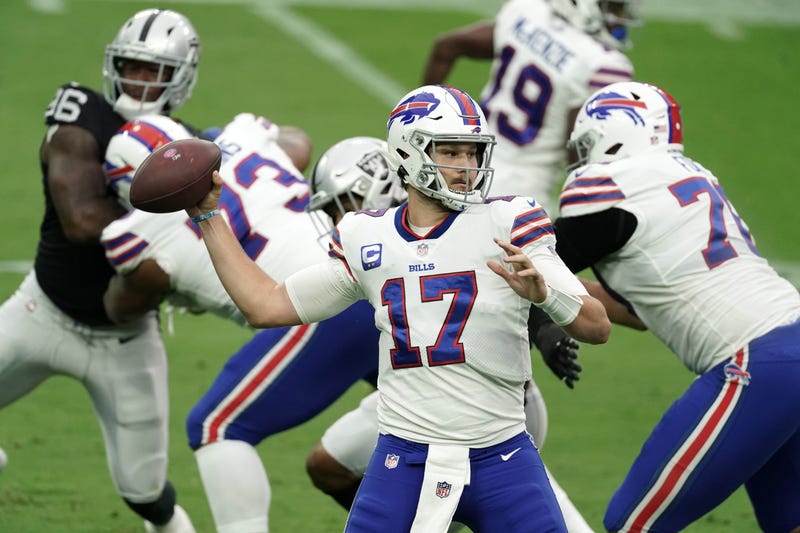 The Buffalo Bills entered the season hoping to compete in the AFC East and win their first division title since 1995. Four games into the season, the unbeaten Bills (4-0) look like they might compete for much more than that.

Is this a top-five team in the NFL?

“Absolutely,” Ian Rapoport said on The DA Show. “Absolutely I [think they are]. Yesterday was good. I thought that was a nice, tough win yesterday. I don’t quite know what the Raiders are yet. They feel kind of like a 7-9, maybe 8-8 team. We’ll see, but that’s kind of what they feel like. So it was a totally fine, good win.”

The Bills led the Raiders 14-3 in the second quarter Sunday but just 17-16 entering the fourth. Touchdowns by Josh Allen and Devin Singletary, however, put the game out of reach, as the Bills won 30-23.

“I thought last week was really, really good for the Bills,” Rapoport said. “You get up, [the Rams] come all the way back, it looks like you’re going to lose the lead, you kind of grit your teeth and make a bunch of great plays at the end, and you win a tough, hard-fought game.”

Indeed, the Bills squandered a 28-3 lead against the Rams, but Allen threw a 3-yard touchdown pass to Tyler Kroft in the final seconds for the win.

“That, to me, that was a game that – if you’re a really, really good team – that’s the kind of game you win,” Rapoport said.

Allen, the seventh overall pick in 2018, has been stellar this season. He has completed 70.9 percent of his passes for 1,326 yards, 12 touchdowns and one interception. He’s also rushed for three touchdowns and has a clear connection with offseason acquisition Stefon Diggs, who has 26 catches for 403 yards and two touchdowns.

“It’s been interesting to follow [the Bills] because they’ve kind of been built a little slowly,” Rapoport said. “Not under the radar, but just methodically, step-by-step. They never exploded onto the scene. They were the media darlings and then they made the playoffs and that was kind of cool and everyone celebrated and then they made the playoffs again and Josh Allen had his moments. Now he looks like he has arrived, and this team looks like it has arrived. I do think they’re a top-five team, absolutely.”