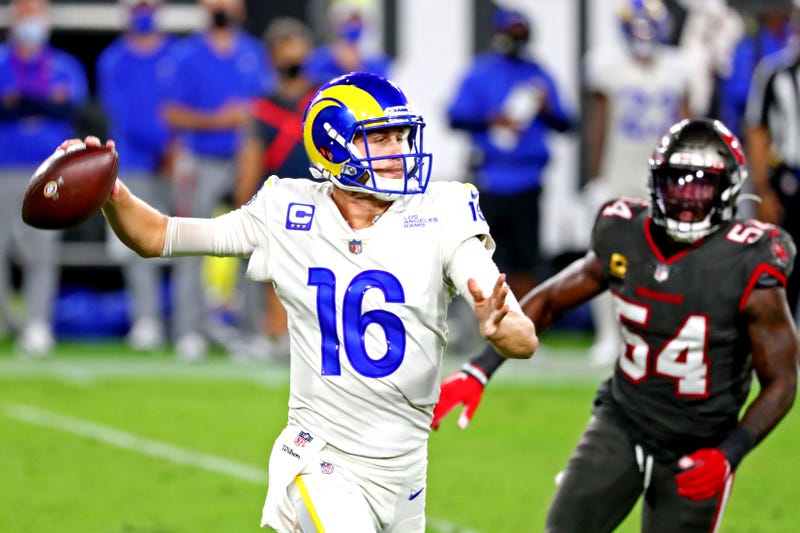 If you think about the best quarterbacks in the NFL, Jared Goff might not immediately come to mind, and perhaps that is to be expected. After all, he doesn’t often author jaw-dropping plays à la Patrick Mahomes or Lamar Jackson.

But Goff, to his credit, has been a productive NFL quarterback. He was the No. 1 overall pick in 2016, has twice thrown for 4,600+ yards, has 103 touchdown passes to 50 interceptions in his career – better than a 2:1 ratio – and, oh yeah, played in a Super Bowl. He also has the Rams (7-3) atop the NFC West, which is far and away the best division in football.

Can Goff, 26, lead the Rams to a Super Bowl title?

“Anytime you have a guy that’s led a team to the ultimate [game], which is the Super Bowl, the answer to that question is yes,” Hall of Fame wide receiver Isaac Bruce said on The Zach Gelb Show. “I think we do a really great job playing toward his skillset and what he can do. He’s a guy that can push the ball down the field; if we need to move the pocket, he’s a guy that’s comfortable doing that; and his ability to make quick decisions, he doesn’t hold the ball, which is a plus for the offensive linemen. Those guys know where he is, so he doesn’t give up unnecessary sacks. So I think with his skillset and what we like to do as far as the running game is concerned, he’s definitely a guy that can get us to another Super Bowl and ultimately win a Super Bowl championship.”

Goff has completed 67.7 percent of his passes for 2,823 yards, 16 touchdowns and eight interceptions this season. He’s also taken just 13 sacks, as the Rams rank fifth in total offense.

Defense, however, has been the team’s strength. That unit leads the league in total defense and ranks second in scoring defense (19.2 points per game allowed).

“I don’t think the defense is getting enough credit for the way that they’ve played thus far 10 games into the season,” Bruce said. “Aaron Donald, I just can’t stop saying his name. He’s a guy that I believe should be up for MVP talks. Just his impact on the defense, how it affects an offense, how it affects his teammates and gives other guys on that front line one-on-one opportunities, those guys can really show what they’re made of and they can just unleash their potential when another guy like Aaron Donald is in the mix.”