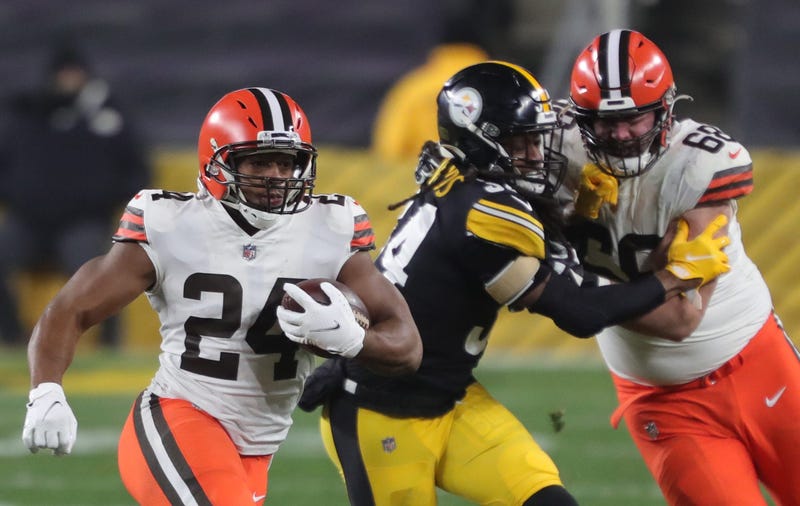 Joe Thomas spent his entire 11-year career with the Cleveland Browns. The third overall pick in 2007, Thomas was a 10-time Pro Bowler and a six-time first-team All-Pro. He was perhaps the best offensive lineman in the game.

But he never got a taste of the postseason.

Which made the Browns’ 48-37 playoff win over the Pittsburgh Steelers on Sunday all the more enjoyable.

“I can’t put it into words,” Thomas said on The Zach Gelb Show. “I can’t even wrap my brain around it because this was supposed to be a season of rebuilding, of building the foundation for the future . . . [with] a new head coach . . . and finding out if Baker Mayfield is your franchise quarterback. We’re now sitting in the divisional round of the playoffs playing in Arrowhead against the defending Super Bowl champs. Maybe I’m a biased homer, but I’m feeling pretty good all of a sudden about our chances going into Arrowhead.”

“Yeah, I definitely think so,” he said. “If you look at their roster this year versus last year, it’s largely the same guys and they were not very good last year. They finished 6-10.”

Thomas thought 8-8 was a reasonable goal for the Browns in 2020. But after starting 9-3, they had already secured their best season since 2007.

“You got to remember they got a whole new coaching staff this offseason, a new head coach, new offense – it takes some time to learn those things,” Thomas said. “With the COVID-shortened offseason, they had no minicamp, no preseason, pretty much a bare-bones training camp practice schedule – that’s just not a lot of time to learn your offense and your defense. So I think they [had] expectations in the .500 range to consider it successful. I think that was pretty reasonable. For them to be able to go out and smash expectations, go 11-5 and then win a Wild Card in Pittsburgh – you’ve got to say they’ve obliterated the expectations for this team.”

Thomas believes that first-year coach Kevin Stefanski has brought steadiness and stability to the organization, while Mayfield took a step forward in his third season.

“They’re all on the same page, and it feels like they’re finally all working towards a common goal, which I think is a little bit different than when I was there and in past seasons,” Thomas said. “But I think a lot of credit needs to go to Baker Mayfield, the maturity he’s shown this year, especially throughout this season. The second half of the season, he’s making excellent decisions, he’s throwing the ball accurately, his footwork has improved significantly and he’s had a humongous impact on the performance this team has had down the stretch.