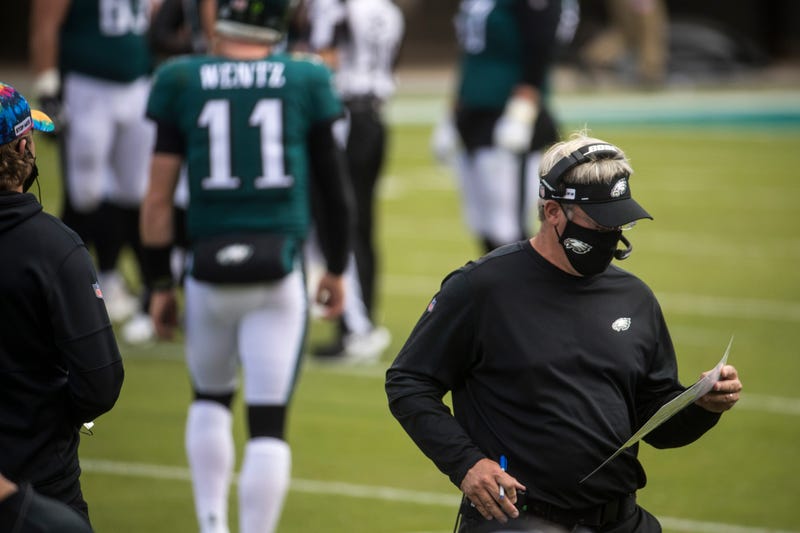 The Philadelphia Eagles entered Monday Night Football hoping to snap a two-game skid and remain atop the NFC East. Instead, they lost 23-17 to the Seattle Seahawks and looked completely inept in the process.

Carson Wentz finished 25-of-45 for 215 yards, two touchdowns, one interception and six sacks, as the Eagles (3-7-1) have now lost three in a row. The game wasn’t nearly as close as the final score indicated, as the Eagles tacked on eight points with 12 seconds remaining in garbage time.

“Terrible. Absolutely terrible,” Philadelphia’s WIP afternoon host Jon Marks said on After Hours with Amy Lawrence. “The game tonight, really, was a great example of the Eagles’ season this year: bad coaching, bad play-calling, bad quarterback play, stupid penalties. Carson Wentz isn’t really accurate inside the pocket; they rolled him out one time tonight. They had nine runs from their running backs; Carson Wentz was their leading rusher. They threw the ball 45 times. When you have an offensive line that’s beat up and has backups in there, you drop back and you pass that many times and you don’t run the ball? The Eagles won the Super Bowl in 2017. It’s hard to believe that they won a Super Bowl just three years ago. It’s bad. It was bad tonight, and it’s not going to get any better. It’s not. They have a really tough schedule coming up.”

“I don’t know what changes,” Marks said. “The head coach doesn’t seem to have any answers, and the quarterback is just completely lost.”

Wentz has been sacked a league-high 46 times. Only four other quarterbacks have been sacked even 30 times. Russell Wilson, with 35 sacks, ranks second.

“Right now, I’d make a real commitment to running the ball,” Marks said. “To really say, okay, we’re going to run the ball, and it may not work every play. We might get a yard or two every play, but really making the commitment. They opened up the game [against Seattle] with three passes. Three-and-out. They didn’t get a first down until the last drive of the first half. So the first thing I do is run the ball and then just get the ball out of his hands. Don’t be dropping him back in the five-step drops where he’s got to look down field and try to find receivers that aren’t getting open.”

“Everything about this team right now is broken, and it doesn’t seem that the head coach really has any clue how to [fix] it,” Marks said. “So I would just simplify things. Find a couple plays that you do well, run the ball a little and take some pressure off of Carson Wentz because he’s got the yips right now. He is so mentally out of it. He’s missing open receivers. He doesn’t see them on the field because he’s so worried about the pressure. The offensive line is terrible. It starts there, and I don’t have any answers. The head coach certainly doesn’t have any answers, either. . . . And it’s not going to change. Until they bring in a different coach or they make some serious adjustments or serious moves, this is not going to change.”